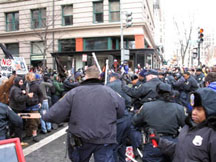 Cops-o-rama outside the Bush inauguration. Photo by Christian Roselund.

Hannah Arendt, the German-Jewish writer who identified the “banality of evil” in the Nuremberg trials, would have understood the second inauguration of George Bush on January 20th. The effort made to manage the event was reminiscent of former Secretary of State Colin Powell’s doctrine for military affairs: overwhelming force and tight media control. But despite all efforts, January 20th was anything but calm and orderly.

It can truly be said that no expense was spared. The inauguration was estimated to cost $40 million, not counting an additional $17 million that D.C. paid for security. And it was not only an obscene display of wealth, but also of bad taste.

A uniform prevailed for the supporters of Mr. Bush, which functioned many places better than a press pass: full length fur coats and diamonds for the ladies, and suits with cowboy hats and boots for men. The artful class deception of this cowboy shtick was everywhere. Outside “tie and boots ball” at a four-star hotel, seven-foot tall contemporary sculptures of outlines of cowboys stood in the darkness, ropes in hand. Bush has made a career of disguising his patrician roots; the only candidate born in Texas this last election was David Cobb of the Green Party. Bush was born in New Haven, Connecticut and like Kerry he went to Yale. Few of Bush’s supporters in DC are ranchers and such attire in no way meant that the wearers were interested in mixing with the plebeians in the streets.

The aristocrats in cowboy boots kept a massive human shield between them and the reality of public opinion. In addition to the numerous DC Metro cops, there were police units visiting from Chicago, Secret Service men wandering by from time to time with wires dangling from their ears, undercover infiltrators complete with Palestinian headscarves, regular military personnel, and snipers on nearly every rooftop anywhere near Pennsylvania Ave. And still the inaugural speech was interrupted three times, and outside in the streets an irregular melee was being waged between police and protesters.

A long day in the snow

The first event of January 20th, Bush’s inauguration speech, is remarkably eloquent if totally without substance. In a cab my friend Patsy and I catch part of it; when W speaks on the radio about the time of “relative repose” of the Clinton years, I note that he used the word repose correctly. “Yeah, he didn’t say ‘re-posse’”, comments Patsy, “he must have been coached.” The cab driver, an African immigrant, laughs; he warms up to us after that.

Less than an hour later, following a breakaway march, we are fleeing police with batons and chemical sprays. Lines of people are pushing each other and in a half run. Someone is shouting to stay calm, not to panic. The riot cops are advancing and shoving people indiscriminately with their batons. More cops with canisters are directly behind them. A stream of liquid hits me in the face. We try to duck, but the cameraman from PBS is hit as well. We push our way out of there.

The checkpoints are another absurdity. In the line at 14th and D streets, the “supporters” area, somber young Republicans are surrounded by a motley assortment of protesters. Three young women who look like they came from a sorority party are chanting what’s on their sign: ”Let’s Bomb Texas—They have oil.” The elephants are quiet and look puzzled.

I go through my pockets trying to find anything that might get me denied entry. The official list on the website included: sticks or poles, backpacks, suitcases, strollers, umbrellas, signs, posters, animals other than service animals, thermos bottles and any other item at the discretion of security screeners that may pose a threat to the security of the event. In other words, anything. I look through my pockets again. Could the contents of my wallet have me forbidden? Maybe my business cards? Will they read my notepad? Could my keys be considered dangerous weapons? Could I use my cell phone to call in an air strike?

The line at the checkpoint moves forward at a snail’s pace. A rumor passes through the crowd that the presidential motorcade has passed. A bearded young man curses aloud in an Appalachian twang. “Damn it, I drove all the way from Kentucky to flip that mó fó off.” A tall redheaded kid standing next to him shakes his head and frownsó”I bought new boots for this.” In the end, we are patted down by a young woman in a uniform, perhaps Coast Guard Reserve. She looks nervous, and lightly taps my front and back. It is significantly less stringent than the rundown I received going through the airport on the way to DC, and I walk away feeling somewhat disappointed.

On the parade route, there are too many protesters between the bleachers to see anything except the top of the White House and riot police. Over the clip of the helicopters and street noise a loudspeaker blares that sounds like a cross between a Vegas lounge act and a newscaster on anti-depressants. Here’s a sampling of the exchange:

The Voice: “Which State Has Produced The Most US Presidents? Shout It Out If You Know It.”

Yells from the crowd: “Which two draft dodgers are now in the Oval Office?”

And again: “I’m Proud To Be An American, How About You? Folks, This Is History In The Making! Let’s Start Getting Excited.”

I chat with a heavyset man from Alabama in a sports cap and camouflage hunting jacket. Lance, a marine who served in Gulf War I, is not displeased with the demonstrations. “You can only support a war if you’d be willing to give your life for that, or give your son’s life. I have a four-year-old son.” Lance points out that “There’s no war that’s a good war,” but he has other concerns, such as the economy, the trade deficit, and the impact of international agreements on American sovereignty. On Iraq, he is clear: “Any of the soldiers over there, anyone who has any sense, knows the Iraq war is over oil.”

The Voice continues: “I Hear The Noise From Across The StreetóI Think You Are Asking For More Presidential Trivia.”

Loud booing from the street.

“Let’s Hear A Big Round Of Applause For The President.”

“Wave Your Hands, Stomp Your Feet, Let’s Get Excited!”

“No Blood for Oil! No Blood For Oil!”

“We Are Seeing The Metropolitan Police Escort On Motorcycles! Give ‘Em A Hand!”

The Voice is broken by shouts and clanging from the fences. Demonstrators have pushed through one section of the port-a-fence and are driven back with batons and some sort of gas. One riot cop gets gas under his face shield and storms off, throwing his baton to the ground like an angry child.

A large object is coming over the fence, both onlookers and riot cops scatter. It hits the ground with a loud clanging sound; it looks like a streetlamp that has been torn off. More are thrown, but the protesters don’t get through the fence again.

Those of us watching are driven back to the curb by the police. One 80-year-old or so woman wearing a lavender pullover with a “Bush cheated” pin refuses to take the final steps. “This is the last time I’m telling you, Lady,” barks the cop. The woman still won’t budge, and replies with a mumbled obscenity. She looks at me with cloudy blue eyes, and explains that she’s mostly deaf.

A regal couple, the woman in a brown mink coat, walks through the line of police nonchalantly.

The melee between the cops and protesters has gone in turns from lamps, to water bottles, to potted plants. Now they are throwing snowballs to which the cops reply with tear gas. One last look at Pennsylvania Avenue yields the most surreal image of the day: a giant Mardi-Gras style float of the constitution sailing by, replete with massive red quill pen.

In the street outside, the hour-long standoff between demonstrators staging a sit-in and a squadron of riot police is ending, and people are milling around. A group emerges from a doorway of a hotel holding a “Kerry Lied” banner with the Twin Towers on it.

In the last four hours, we’ve been pepper-sprayed, corralled, searched, subject to inane broadcasts, threatened and shoved with batons. Many of us are starting to lose our cool. A shouting match ensues. One young man from the crowd grabs the banner, and a self-proclaimed Vietnam vet with handlebar moustache grabs him in a headlock. I begin to pry the headlock off; he lets go and takes a swing at me. We are separated by peaceniks chanting “no violence, no violence.” The peaceful protesters surround the vets, telling them calmly to go back inside, holding peace signs over their heads for the cameras.

In a cab going to Dulles Airport in the snow, I meet Salif, another west African immigrant. He echoes the sentiments I’d heard elsewhere in DC, a town that went 90% for Kerry. Salif describes the protests as “fantastic”, and knows that “what happened two days ago at the inauguration is not what we saw on TV.” He talks for perhaps forty-five straight minutes in the gathering darkness about what he calls the “intelligent stupidity” of America today. He explains that “while we are busy spending millions and millions to approve missile defense systems, we can’t solve the problems down here.” In the course of the ride he lays out a savvy critique of the Bush economic agenda.

I am in a cab with a man who has a detailed understanding of the politics and economics of America today who is risking his life to get me to the airport for sixty dollars. A few miles away, a man who once complained in a debate of his opponents “Washington fuzzy math,” is starting his second term as president of the most powerful nation on earth. Watching the lights of Washington pass by, I can’t shake the feeling that as much as we all might feel better by getting out on the street, very little has changed. Salif is still talking in his full, round African voice: “If you had told someone at the height of Rome that it would fall, they would have laughed.”

Jeffrey Perkins’s George is an important new addition to the twin canons of art and anti-art.

Messenger does not in and of itself repair the environment, but as it poses the future as an unanswered question—left blank in Boorujy’s voids and given one possible vision in Bloise’s landscapes—it offers a space for rethinking and re-feeling our ethical relationship to our shared Earth.