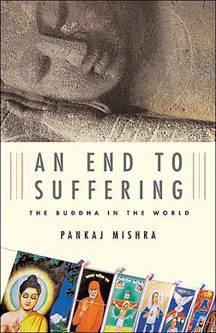 Pankaj Mishra and his latest work, An End to Suffering: The Buddha in the World (Farrar, Straus and Giroux, 2004)

With little money and vague literary aspirations, a young writer named Pankaj Mishra moved to a quiet Himalayan town called Mashobra in 1992. Just a year earlier, the Indian government had engineered sweeping reforms to liberalize the nation’s torpid pseudosocialist economy. As India took its first clumsy steps into the global village, donning its “golden straightjacket,” economists, industrialists, and politicians around the world were exultant.

But Mishra was skeptical of the country’s assimilation into the world economy and new, “garish” middle-class wealth as he emerged as one of the most incisive writers of his generation. Using Mashobra as his base, he wrote his first two books—Butter Chicken in Ludhiana, a sardonic travelogue, and The Romantics, an enchanting novel—which examined modernity’s ambiguous influence on provincial India. While staring at distant villages near the Tibetan border from his balcony in Mashobra, Mishra first became enthralled with the Buddha, the subject of his third book.

Although the United States is home to several famous Buddhists—from Allen Ginsberg to Steven Segal—and people here are at times more concerned with freeing Tibet than with the plight of public education, the historical Buddha has been relegated to the land of myth and legend in contemporary India. But rather than as an anachronistic mystic, in An End to Suffering: The Buddha in the World, Pankaj Mishra casts Buddha as one of the world’s most practical and prescient philosophers. In this challenging and extraordinarily thoughtful journey, readers learn that the Buddha’s ancient wisdom may provide invaluable solutions to a modern world plagued by the ubiquitous, interrelated forces of poverty, religious radicalism, and terrorism.

Despite a lack of archaeological records from the Buddha’s birth in the sixth century B.C., Mishra weaves an illuminating and objective portrait of him as well as the society into which he was born, which was a surprisingly cosmopolitan environment. The emergence of a new urban economy in the years prior to the Buddha’s birth transferred wealth and power to lower-caste members of society. Previously, high-caste Brahmins had wielded their exclusive knowledge of ritualistic religious traditions to suppress low-caste members of a predominantly agrarian society. With newfound urban wealth, lower-caste individuals who once complacently accepted restrictive traditions acquired a new sense of individuality.

In a nuanced and innovative discussion, Mishra explains that European society in the 19th century underwent a similar transition. In the aftermath of scientific advancements and industrialization, an unaristocratic but wealthy bourgeoisie was freed from the moral dogmas of Christianity. But like the people who inhabited the Buddha’s India, Europeans were burdened by their new sense of an “autonomous self.” The market economy did little to provide long-term happiness for people scared by change and progress.

European writers and thinkers from Nietzsche to Hume “diagnosed the new intellectual and spiritual impasse faced by human beings at a time of tumultuous change.” But for Mishra, their assessment of the age’s condition often didn’t amount to more than “eloquent lament.” It was only the Buddha who prescribed a remedy to modernity’s ailments that was both “therapeutic and ethical rather than metaphysical or theological.” In the Buddha’s eyes, the notion of an autonomous and stable self was a delusion that gave rise to an insatiable stream of material desires and in turn endless suffering. His teachings suggested tangible ways of thinking and living that would eradicate this suffering and at the same time foster social harmony.

While some pre-modern Asians found respite from the destruction of preexisting morals in the Buddha’s teachings, 19th century Europeans stripped of traditional socioreligious beliefs placed their faith in secular sociopolitical structures—the nation-state, free-market capitalism, and socialism. But as an itinerant writer with roots in a postcolonial, globalized society, Mishra is pessimistic about the ability of these modern entities to alleviate a world blighted by so much suffering. New secular systems have offered little in the way of morality or ethics, unlike the Buddha’s vision, and as prognosticated by Nietzsche, have given rise to unprecedented warfare and the religious violence that has afflicted the first years of the 21st century.

In 2004, as in the time of the Buddha and Nietzsche, Mishra suggests that people across the globe—Hindus, Muslims, and Christians—are confused by a changing world order. Instead of seeking refuge in conventional secular ideas, however, they are increasingly pinning their hopes and fears on religious radicalism. Meditating on this distinctly modern phenomena, Mishra describes his visit to the Pakistani-Afghani border, where 200,000 radical Islamists once gathered to hear speeches imploring them join the jihad against America and its allies:

“The atmosphere there was of a medieval desert fair: thousands of men walking urgently around the sprawling township tents under a vast cloud of dust, the pushcarts with fresh sugarcane juice and piles of chewed up canes, past the stalls selling beautifully illustrated copies of the Koran in Urdu and Arabic, along with posters of Osama Bin Laden, who was clearly the star of the event.”

At the conference, however, it is the sight of six destitute young Islamists sleeping on the floor in tattered sheets that particularly moves Mishra. Hailing from impoverished countries, Mishra notes, these men have been unable to enjoy the promises modern secular society—owning a car, raising a nuclear family. Frustrated and desperate, they turn to fundamentalism. While many intellectuals correctly attribute the fomentation of religious radicalism and violence to economic depravity and politics rather than a monumental and age-old “clash of civilizations,” Mishra’s articulation of this argument is especially poignant in light of his intimate knowledge of geopolitical and communal conflict in South Asia, which is exemplified in his writing in The New York Review of Books and The Guardian. Furthermore, for Mishra, these men have turned into zealots who espouse violence and terrorism not only for economic and political reasons but also for psychological and spiritual ones. “Having lost the protection of their old moral order” he writes, “they hoped to stave off chaos and degeneration by joining such authoritarian movements as Hindu nationalism and radical Islam, by surrendering their dreams to demagogues like Bin Laden.”

When Mishra describes his experiences in Pakistan, England, and Northern California, An End to Suffering is characterized by a keen eye for dynamic description and situational irony. Unfortunately, the book’s philosophical discussions and historical conjectures are devoid of such alacrity. Likewise, the book’s broad scope lends itself to a desultory narrative structure. But perhaps such pitfalls are unavoidable in a book that is first and foremost a complex philosophical, historical, and sociological inquiry. Many critics have been unwilling to engage with the book on its more complex levels and fail to communicate the immensity of Mishra’s undertaking. William Dalrymple accuses Mishra of devoting too much time to his discussion of European thought and Nietzsche. But Mishra is attempting to understand the Buddha’s relevance to our contemporary world, and in doing so, must partake in a detailed engagement with European thought. In his own words, Europe’s 19th century “had shaped much of the world, and thus my own circumstances.”

On the other side of the spectrum, British critics claim that Mishra’s handling of 19th century philosophy is wrought with the awkwardness of an “outsider.” But despite being an “outsider,” Mishra’s discussion of modern thought offers relevant, insightful perspectives on such influential minds as Adam Smith and Karl Marx. Also, in reevaluating the European historical register on the Buddha, Mishra subtly undermines archaic Eurocentric versions of history. One can’t help but wonder if the literati of the former empire are unwilling to relinquish the reins of narrative authority to a critical, intelligent writer born and educated in the “colony.”

Mishra’s discussion of Buddhism as well as his profound historical and philosophical acumen enable him to wage a penetrating, revelatory critique of the most fundamental aspects of our society. Grappling with the inextricably linked forces of fundamentalism, violence, and poverty, he comes to terms with the inability of devout secularism and its institutions—the bedrock of modern European thought—to satisfy humanity’s most primal, existential needs and end suffering in the world. Fortunately, through his discussion of the Buddha, he outlines a progressive pathway towards the ethics and morality that much of the world is craving, which is as quixotic as it is empowering.

His latest books of essays, Bland Fanatics, which collects writings published mostly in the 2010s, focuses on the failures of Western liberalism, its mainstream media, and the bankruptcy of its most revered intellectuals. We spoke with Mishra on the occasion of the book about liberalism in disrepute, the lessons of Antonio Gramsci, and the usefulness of certain literary styles.

Laddie John Dill is an LA based artist who was at the forefront of the “Light and Space” movement in the late sixties. In 1971 he had his first solo show at Ileana Sonnabend’s gallery in New York City. Since then Dill’s work has been shown and celebrated internationally. Early in the fall Michael Straus spoke with Dill on the occasion of the artist’s exhibition at Malin Gallery. The conversation that follows touches upon Dill’s early artistic development, his work as an educator, and his careful consideration of how architecture functions in the context of his sculptures.