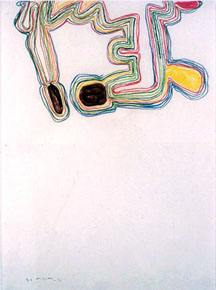 The measure of a group show might be given in the quality of the narrative it constructs. According to these terms, a good group show could successfully elaborate, say, contemporary trends in abstraction or the history of figurative painting in England. Traces Everywhere, the current group show at Tracy Williams, takes a humbler route and assembles a set of artists based solely on their use of a paper ground in their work. As a result, some of the exhibition’s twelve artists make rather strange bedfellows. Any resultant friction, however, is more than adequately compensated for by the overall excellence of the show.

Most creative in his use of the paper ground is Ernst Caramelle. He capitalizes on cheap construction paper’s susceptibility to sunlight by exposing partially covered sheets to the sun for varying amounts of time. The result might be an infinite gradient of values, but Caramelle keeps his forms simple. His paperwork is restrained without being cool.

He has excellent company in Tracy Williams’s ground floor gallery where Zipora Fried takes up floor space with a scroll. It runs from the wall to stretch most of the length of the small, rectangular room. A wedge shape form, knit tight in graphite, runs most of its length, its hard-edged rigor a fine foil for the child-like forms of Olav Christopher Jenssen’s colorful pastels. Jenssen sticks to the margins in his drawings and, through some magic many artists miss, activates the untouched paper. In his drawings, linear abstraction seems prone on the edge of representation. He goes so far as to sketch a figure at the left-hand edge of one drawing.

This might seem a good lead-in from the abstraction downstairs to the more figurative work in the upstairs gallery, but the transition winds up a bit jarring. Here, Fiona Banner takes center stage with a horizontal diptych entitled “Black Hawk Down/Plaything II.” It’s a text piece on paper, the garbled verbiage of which seems to describe events in the two films, the former disturbingly violent, the latter sexually lurid. Besides being extravagantly beautiful, this piece has little to do with the above-mentioned Ernst Caramelle, who is also hung in the upstairs hallway, or, for that matter, with Joe Fyfe’s lyrical collages that follow in the second upstairs gallery. Banner’s work relates more clearly to the semiotic strains in Matt Mullican’s work on the opposite wall. His titles, written on the drawings’ faces, are as forceful as the stick figure drawings that accompany them. Mullican’s ever-evolving symbolism also sits comfortably with that of his neighbor in the exhibition, Anne-Marie Schneider. His work is concrete and analytical, hers intuitive and gestural; the two make a fine couple. They underpin, to my eye, the logic of the upstairs arrangement.

It would not do to end without mention of Wes Mills’s abstractions. Of a scale and touch reminiscent of an Indian Tantra drawing, these exquisite drawings marry Richard Tuttle’s playfulness to Joseph Albers geometry to fresh effect. They prove again the old adage, Picasso’s I think, that every great artist is first a great thief. Their scope is a mirror for that of the exhibition’s artists who all merit far greater examination then they’ve been given here.

SPENCER FINCH:
Me, Myself and I (A Group Show)

Like an athlete bent on extreme challenges, Spencer Finch tests the limits of visibility. Here, in works on paper from the past ten years, he applies his observational powers to the colors of the Pacific Ocean or California darkness.

The title of the Met’s new ongoing installation, Epic Abstraction: Pollock to Herrera, suggests a revisionist take on the history of abstraction since World War II. However, the show is drawn almost entirely from the permanent collection, which is simply not broad enough in this area to fulfill such an ambitious promise.