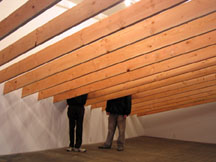 Perception is the departure point for Thomas Lendvai’s brilliant installation, “A series of ‘nows’” (2005), at Plus Ultra. Using a sequence of wooden beams, Lendvai creates a kind of slanted drop ceiling that spans the gallery space. The initial apprehension of the ceiling gives way to a total physiological experience. Simply seeing the installation in no way conveys the work’s intimate physicality. It is through interacting with the work that it reveals radically different spaces.

Immediately inside the gallery, the ceiling creates a closed space with muted, warm lighting. As the viewer progresses the ceiling forces a bodily reaction, either to hunch over or enter into the spaces between the wooden beams. Beneath the ceiling there is an uneasy sense of enclosure that is broken when seen from above. Standing between the beams, the space opens up, bright and washed out with the plane bearing downward. The sudden perceptual switch from closure to openness is one of the work’s most stunning effects.

There is a moment when, standing in the right position in the middle of the two facets of the space, the work seems to literally embrace the viewer. The narrow spaces Lendvai creates with the slanted beams are generally wide enough for a body. It is precisely as the beams slide along the shoulders that the sense of touch is activated. It brings to mind the use of physical compression used to treat autism. There is something strangely comforting about the space, inviting further interaction inside.

The physical divisions, barriers, or guides create a different kind of social space that is difficult to articulate, holding and framing subjects in ways that alter normal perception. Once engaged inside the work, it almost disappears until the viewer is forced to re-establish a new position. Every new perspective gives the work new possibilities. Structurally it alternates between solidity and fragility as the supports are hidden from sight. The beams seem to be perfectly fit to the space without any internal support. Lendvai devised a new way to hang the beams, making them weight-bearing and inviting viewers to hang on the beams or possibly to walk across a raised floor.

In the end, the entire work moves from enclosure to support. The perceptual shift is perhaps the most stunning aspect of the work, which resists being merely an object of scrutiny. At some base level, it is like an intellectual and artistic jungle gym that runs counter to its hard-edged, minimalist exterior. There is nothing in its appearance that would indicate its complexity. In the past theatricality was used to deride external references to Minimalist art, in an effort to deny a connection to the world. While there is something theatrical about Lendvai’s work, it is the potential for external connections that makes this installation surpass its historical models Denying its social and physiological aspects would be a disservice to the work.