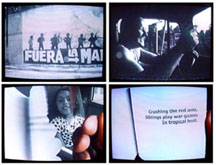 Is it fair that an exhibition devoted to the book ends up reaffirming the vitality of contemporary video? This smart, teeming show, curated by Sarah Reisman at Gigantic ArtSpace, gets off to a flying start with Manuel Acevedo’s “The Albizu Project” (2002), which greets you at the door beside Olu Oguibe’s sleek poster of a book-wielding urban Adonis, “Feed Your Mind.”

The video, which takes its title from Puerto Rican nationalist Pedro Albizu Campos (1891–1965), cuts between slice-of-life glimpses of Puerto Rico—plazas and rain forests, a sickly old woman, kids tossing a ball—and extreme close-ups of hands riffling through the pages of a blank notebook. Letters race across the pages, forming fragments of polemical poetry (“Children runaway, / Dodging the english language / Like hot lead bullets”). This simple strategy reveals a people’s struggle in heartfelt human terms while transmuting the idea of the book into new, hypnotic, and exhilarating terrain.

The two other videos in the show use books as props in single-channel installations. “Last Looks” (2004) by Kambui Olujimi conveys the sweaty violence of college football through a soundtrack throbbing with raucous, overlapping voices (all performed with uncanny verisimilitude by Olujimi himself) set against intimate shots of an empty stadium, its lockers, workout rooms, and offices. A shelf below the screen holds an accordion book of the soundtrack’s transcript annotated with musical dynamics (forte, mezzopiano, etc.). It sounds like a gimmick, but the juxtaposition, while unexpectedly funny, evinces the artist’s respect for the sport’s balletics and his identification with the passion of its athletes.

With her brainy and beautiful “Perseverance & How to Develop It” (2003), Jenny Perlin approaches the book as any self-respecting filmmaker would—she adapts it. But the book in question is a moldering self-help manual from 1915, entombed in a Plexiglas vitrine, and the adaptation is decidedly post-Godard. The film (16mm transferred to DVD) links the pursuit of perseverance and efficiency to the twentieth century’s industrial successes and spiritual malaise. Henry Ford, Sigmund Freud, antidepressants, nail biting, and hair pulling are cited as evidence in wryly comic textual and visual documentation. But Perlin undercuts what might have become an exercise in irony with the poignancy of her ravishing images: a mezzo-soprano struggling through Gluck’s “Che faró senza Euridice;” a misty, rain-drenched roofscape; a distant jetliner floating across an empty twilit sky.

The other artists in the exhibition intervene more directly with books as physical objects, leaving very few intact. Though the printed page is relentlessly gouged, gored, splayed, chewed up, and spit out, the overriding sentiment remains an abiding love for the act of reading and the material qualities of the book.

“First Lines, Last Lines” (2004) by Reynard Loki, according to its wall label, is an ongoing project that “documents the first and last lines of all the books in the artist’s library.” Two large white panels present the text (first lines on one, last lines on the other) with an elegant simplicity that accentuates its surrealist absurdity—it reads like a particularly cracked Burroughs novel—until you’re caught up short by the line “The more scientists know about tsunamis, the safer people around the world will be.” It’s disturbing to realize how easily a random reference can be irrationally recast by a contemporaneous catastrophic event (the Indian Ocean tsunami struck halfway through the show’s run) into something sinister and chilling.

Subtext is used deliberately and pointedly in other works. Rajkamal Kahlon redeploys pages from Victorian-era British books about India, mocking them with gouache overlays of satirical images. “Imports & Exports” (2001) reduces the gist of colonialism to a few lines of truncated text on scuffed, yellowing paper (“India. / its exports and its imports, you must turn to its geographies”) with a surprising emotional punch. Pia Lindman and Carlos Motta both recycle the mass media’s exploitation of tragedy: Lindman with line drawings based on media images of her own performances, Motta through downloaded, stacked, and discarded newspaper photos. And Ayreen Anastas incises the OED to reveal what literally lies beneath the definitions of words.

Other artists in the show include Gulsen Calik, Matthew Buckingham, Jesal Kapadia, Laura Carton, Ed Ruscha, Raymond Pettibon, Edwina White, Joe Fish, Maciej Toporowicz, Sebastian Romo, Airan Kang, and Brian O’Connell. The range of their activities is dizzying: photography, digital art, sound art, architecture, poetry, theory, and curating to name a few. The exhibition space itself may be a sign of the times: its mission statement, which pledges to foster “ideas and collaborations in multi-disciplinary contemporary art…[at] the intersection between music, politics, pop, and international cultures,” might align it with such venerable non-profits as Exit Art or White Columns, but Gigantic ArtSpace is a for-profit subsidiary of the Gigantic media group, which includes a film company, a record label and a clothing store. For better or worse, synergy has struck the art world.

Farid Matuk is the author of The Real Horse. Redolent, a book-arts collaboration between Matuk and Colombian artist Nancy Friedemann-Sánchez, is forthcoming from Singing Saw Press.

I have often wondered: how is it that so many of the post-conceptual, post-minimalist, performance, and video artists that have made up New York’s vibrant downtown arts scene over the last three decades all seem so familiar to each other?