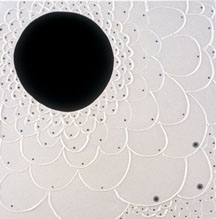 I first saw Tamara Gonzales’s new show the night of the winter solstice. It was an appropriately blustery evening, and by the time I arrived, the gallery doors were fogged over from the warm breath of conversation. Unbundled and warmed by mulled cider, I took my place amidst a group of friendly revelers to listen to a series of readings.

The winter solstice recognizes the shortest day of the year, and celebrates the eventual coming of spring. Determined by the earth’s relationship to the sun, it is nevertheless a day whose recognition is predicated on a belief in a multitude of forces often ignored in “rational” society: myth, ritual, occult spirituality, natural divinity. It recognizes that the darkest days have passed, and that although winter will continue, the new year dawns. The solstice, with its mixture of pagan and religious tenors, is an apt metaphor for Gonzales’s work, and her joyful and exuberant paintings and sculptures formed a backdrop for the event, and set the stage for celebration.

While not iconographic, Gonzales’s work carries a certain spirituality and expressive belief that alludes to an artist with a profound awareness of things mystical and holy. In the front gallery, over 20 small works were hung salon style. With overt quotation from Indian and Mexican motifs, they freely explored the visual richness of cultures which demonstrate incredible religious porosity; where faith infuses daily life; and where piety is an infectious presence coursing through all aspects of society. Small, simple, and often brightly decorated, each painting centered on a single subject, for instance a flower or a skeleton, and appeared like a referential token or object of devotion.

Other paintings reflected the mystical elements of the artist’s own life in Brooklyn and upstate New York. Collages composed from dollar-store bins were decked with beads and glitter, reminiscent of the fiesta-wear of Mardi Gras, and a throne for the solstice king was interwoven with curled ribbons and gilded with the small gold icons. Mushrooms cantilevering off canvases carried hallucinogenic powers when graced with pink, white, red, and blue paint, and the effect, while absurd, retained an unexpected dramatic grace. Unlikely bedfellows, the materials were united by the magical symbolism they carry in the hands of believers, and the energy of objects associated with celebration.

The result, it seems, is a series of studies cloaked in popular mysticism that form a kind of progressive spiritual emersion which carries Gonzales (and the viewer) through to the main event—a suite of large white paintings that hang in the larger rear gallery. These white “seed” paintings relate to one and other like siblings: shared genes with unique personalities. The palette—pink, peach, silver, black—is feminine, and the forms are ripe with fecundity. Each focuses on an ovoid shape, which grows out in concentric circles, or crescents. Accentuated by small dots, these repetitious markings conjure scales, breasts, and eyes, barely contained by the rectilinear canvases. Intertwined within are snaking stripes, penile mounds, and cresting waves that are decorated with glitter. From afar the canvases shimmer glossy and slick, yet from close-up the planes of colors fracture, traces of earlier versions are visible, and the crunchy accretions reveal their imperfect placement and awkward piles. This profound difference between a near and far vantage point adds tension to the viewing experience, but I am uncertain as to whether this kind of dynamism helps or detracts from the organic abstraction.

In the eloquent artist’s statement that accompanied the show, Gonzales writes about painting dots while America waged war around in the Middle East. She suggests that by painting, she was contributing living forms to a society that increasingly seems to be dying. Indulgent perhaps, the reality is that a sense of devotional repetition is retained in the canvases, and it inspires. So while kitschy and queer, Gonzales’s paintings maintain an unfettered grace and hold their own, triumphantly.

Tamara Gonzales has spent her life living, experiencing, understanding, and connecting with the indigenous cultures of the Americas, spiritual and ritual practices from India and the Caribbean, and with Magick, as well as undergoing healing journeys facilitated through psychedelic plant medicines, without forgetting her early years professionally decorating cakes while being immersed in counterculture and the punk music circles of the 1970s in New York.

Gonzales’s efforts to transform both the emotional raw material of her research, as well as actual patterns and motifs found in Shipibo textiles, result in compositions that seek to retain the freshness and urgency of her experiences, while opening up a space in contemporary artistic practice for a non-exploitative relationship to pre-Colombian cultures.