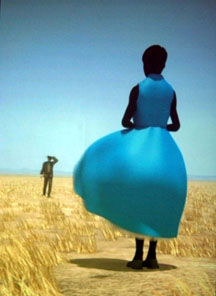 Little more than a block away from the construction site of the World Trade Center, on the second floor of a low-rise building oddly mismatched with its towering corporate surroundings, Ouverture is an essential and urgent viewing for anyone concerned with the role of politically-conscious art on the threshold of Bush’s second term. New York artists have struggled to respond collectively to W’s policies as effectively, or at least as visibly as activists in the early 1980s did to Ed Koch and Ronald Reagan. The gut-felt anger may be comparable; indeed many of the artists who took to the streets at the turn of the 1980s continue to fight on the front lines today. But unlike AIDS and social injustice which affected both the art world and New York at large, Iraq remains a remote television flicker to most gallery-hoppers doing the weekly rounds in Chelsea. Thus one reason to make the necessary detour to see Ouverture—a residency and exhibition of young Italian artists selected by curator Daniela Lotta—is precisely its peripheral distance from the financial hub of New York’s art scene, and central proximity to Ground Zero, the symbolic justification for the politics of Empire billowing from the White House.

At one level, therefore, the art in Ouverture prompts the question: Which one of these is the margin to the other’s center, the lucrative New York gallery network or the political exploitation of 9/11? As an exhibition benefiting from funding from the Commune of Bologna (read: Italian tax-payers’ euros), Ouverture brings the periphery/center question into broader focus, asking: How to intervene locally when Italy’s current prime minister supports Bush’s war in Iraq while adhering to the EU’s defiance towards American imperialism? The strength of this exhibition consists not merely in showing that the distinction between local and international, or between margin and center, no longer holds, but that the very notion of locality needs to be re-imagined, as more fluid rival blocks of global power coalesce in the names of “multi-polarity” and “freedom.”

Diego Zuelli’s 3D animation depicts a woman and a man standing, facing each other at a distance in an otherwise barren field. The “film” shifts between two “camera” angles: from a point behind the woman, looking towards the man, and from a position behind the man gazing back at the woman. Traditionally, the alternating camera shots allow for the smooth unfolding of dialogue, implying a mutual bond between actors. Here, the 3D animation exerts no symbolic pull on the static figures: they mirror each other in perfect silence and dissymmetry. Sandrine Nicoletta’s installation also reflects on the dissymmetry underlying inter-subjectivity. Her punctured metallic oil barrel bears the outline of Iraq, captioned by the phrase “Therefore we shall sleep well.” On either side of the steel drum hangs a photograph; the first a cropped snapshot of the upper half of a man’s face, set against a blue sky; the second of two chairs side by side, one of them legless on the floor.

Stereoscopy is yet another means of staging the flawed relation between pairs. The three-artist collective called ZimmerFrei resort to the 19th century optical device to give their lugubrious scenes of New York the illusion of depth. Reminiscent of Scorsese’s Taxi Driver, the stereoscopic images should be viewed alongside ZimmerFrei’s contribution to the exhibition’s catalogue: a two-page collage of graphic pictures referencing the Abu Ghraib photos. Lastly, Anna Visani’s mixed-media wall painting may initially seem more upbeat than the other exhibits in Ouverture. However, her kitsch pastel assemblage may well be the most pessimistic piece in the show, reducing the representation of a post-9/11 world order to a map of flimsy decorations, including cocktail umbrellas, miniature paper flags, and a green lantern.

With locality difficult to situate amid the garish hues of good, evil, and democracy, the art inOuverture seems instead to grope for a new definition of proximity. To me, the exhibition suggests that proximity should not be understood as collective fusion—which would be synonymous to looking back nostalgically to the bygone era of 1980s activism. Rather the works articulate proximity as fission, that is to say: as a psychological awareness of the multiple distances that dwell at the heart of globalized politics.

What does history look like? Jacob Lawrence's series of fifteen prints on Toussaint L'Ouverture, displayed at DC Moore gallery, invites us to contemplate the complexities of a historiographic intervention within the context of aesthetics.

This latest, and last, exhibition at Interface Gallery arrives as we feel ourselves on a precipice: we risk encountering what lies beyond the unraveling of our social fabric. A threshold signals a material change or activation, abandoning what is left behind to confront, embrace, and to become something new.