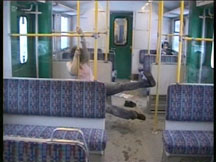 Two rectangles of spidery broken glass act as a forbidding anti-decoration on a street-facing windowsill. A couple glass chunks, obviously freed from these larger bodies, are scattered hazardously about the rust-stained floor, which is made of ugly linoleum. An opened bag of Decorative Moisture is perched above the doorway, perhaps related to Klara Liden’s exhibition, but probably not. This storefront space, its purpose unannounced by a sign, is located at 371 Grand Street in the Lower East Side on the same unassuming block as Kossar’s Bialys, a dollar store, and a housing project. Given this description, what would you guess it sells? Suspect hardware? Replacement car windows? Storage space? This scrappy outpost is Reena Spaulings Fine Art, a relatively new addition to the Lower East Side/Chinatown gallery circuit. Like its downtown forebears Maccarone, Inc., CANADA, and Participant, Inc., Reena Spaulings is determinedly anti-Chelsea in its shabbiness. And while Chelsea has shown its capacity to accommodate galleries like American Fine Arts and Daniel Reich Gallery with a similarly slack aesthetic, you don’t get the sense that Reena Spaulings aspires to “graduate” to Chelsea.

This is Swedish artist Klara Liden’s first solo show in the U.S., and, like the gallery presenting it, it’s a decidedly un-aesthetic experience, the type of show where art and a bag of Decorative Moisture become indiscernible. On view are two videos and something resembling an architectural construction. The video “550 Jamaica Avenue” (2004) shows the artist banging out a tune in a variety of languages (none of them English) on a piano inside a vacated Bed-Stuy apartment filled with someone else’s junk. “Paralyzed” (2003) shows the artist stripping off her coat, pants, and socks (just one sock, actually) and frolicking inside a Stockholm subway car, oblivious to the blank-faced witnesses of her inspired détournement. “Benign” (2004) is an underwhelming fortress that is essentially a tree house made of broken-down cardboard boxes supported by steel frames. The thing is surprisingly sturdy, and there is a ladder, meant to be climbed, and offering a peek into the elevated interior chamber. Inside are five small, framed photos, ostensibly of the sites around the 10002 zip code where Liden scavenged the materials for the structure, which apparently cost nothing to make, just like the two videos.

As stand-alone documents, the videos emit an air of weird-for-weird’s-sake bohemianism, a bit like Olaf Breuning’s video “Home,” seen last year at Metro Pictures. But surrounded by “Benign,” something about Liden’s show crystallizes, and it has a lot to do with the perfectly congruent character of the space housing it. Shedding the shackles of societal conformism has been a motive of artists for many years, at least since the advent of modernism. Liden’s artistic response to contemporaneity is to inexpensively make art about the creative use of space (read: finding free space) and the transformation of public space into private space or maybe vice versa. Transforming life into art is an old modernist project. “550 Jamaica Avenue” may delve into absurdist cabaret bizarro, but it is also a certificate, proof of once-possession. When, for whatever reason, 550 Jamaica Avenue in Brooklyn was vacated in 2004, Liden was there, occupying the space during its period of nebulous ownership while it was neither public nor private. And on the subway, where eye-aversion is the unspoken rule regardless of city, Liden breaks down the weird privacy barrier that public transportation erects between people. You couldn’t not stare at her if you were in that Stockholm subway car. Spontaneously, a non-space became a theater and non-people unwittingly became actors participating in the same play.

“Benign” feels like Liden’s manifesto. I never asked if I could climb the ladder and poke my head around its interior room; I gave it a knock with my fist to test its sturdiness without a second thought. Obviously, this isn’t a piece to be taped off and hawked over by a sleepy guard. It’s for investigating, for getting up into that chamber, for figuring out how she did it and how you could do the same. Like much of the work in the Mass MoCA show The Interventionists, Liden’s show is a guide not exactly to civil disobedience, but a means of subverting very basic societal codes like owning or renting a dwelling and maintaining a basic level of self-control in public. Along these lines, Liden recently developed a free, underground postal system in Sweden. Sure, there’s a whiff of hippyish, naïve optimism here, but considering the current glut of uninspiring “political art” that’s little more than the joking of the defeated, at least someone is really trying to live the good life instead of passively fighting the good fight.

After her father is killed in an anti-Semitic pogrom, an 8-year-old girl emigrates with her mother from the Ukraine to New York City. It’s only long after, at the age of 45, that she begins to paint, using, among other materials and tools, enamel paint and glass pipettes from her husband’s costume jewelry business. Working with these unconventional means she develops a novel method of painting that involves dispersing fluid drips and pours of paint across the entire canvas. Her studio is a few square feet on the parquet floor of the Brighton Beach apartment she shares with her husband and son. Thanks in large part to the actions of her son, her work attracts the attention of several avant-garde refugees from Europe (two of whom pay visits to her in Brooklyn) and other people interested in “primitive” art.

At the age of 38 an Argentinian artist who has abandoned a law career to become a painter moves to New York City where he rents a studio in Little Italy and supports himself by working as a waiter at the Caffe Figaro on Bleecker Street. The same year he has his debut solo show in the city and moves his studio to 248 Lafayette Street. The following year he has his breakthrough idea of leaving the front of his paintings solid white and applying color only to the sides. When he shows one of his first “sides only” paintings at a 57th Street gallery, an art critic who visits the show climbs onto a chair to see if the top edge of work has also been painted. (It has.)

An artist organizes a group exhibition in the loft building where he lives. For his own contribution he drills a small hole through the wall into the church next door. His plan is to drop a microphone through the hole and pipe the sounds from the church into the exhibition space, but when he enters the church and sees that his drilling has left a small pile of plaster on the floor, he has second thoughts. He is afraid that his act will be seen as an attack on the Catholic Church. Instead, he drills a hole in the wall on the other side of his building so that his microphone can pick up the everyday sounds of a beauty salon.