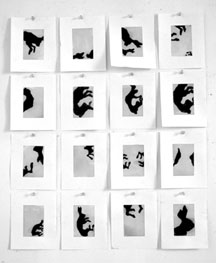 A trio of young men comprise a show that hovers between angst and the desires that fuel their acute anxieties. Jason Cole Mager was asked to select two artists whose work would complement his own. Credit Mager with making the intelligent selection of Michael Yinger and Jeffery Kilmer, whose works inform his own narrative interests, while reflecting different formal concerns. Mager’s centerpiece, “Bad Hare Day” (2004), is a seductive, time-lapsed day in the life of the artist, focusing on his obsession with rabbits.

The hare, in this case, is reiterated throughout the exhibition in charcoal and oil drawings in large and small formats. Mager’s fixation with the image of the hare, twisted and broken, is an obvious metaphor for mortality. It works best in the video, where Mager superimposes the graphic outline of a hare into the time-lapsed sequences, externalizing his interior psychological state in otherwise mundane scenes from a bohemian existence. There is a beautiful moment in the beginning of the video, as the artist eats breakfast, when the hare mysteriously surfaces in the table. The apparently leisurely day is marked by an unseen weight, which saves the video from mere narcissism.

As Mager’s narrative progresses, the artist is revealed to have the image of the hare tattooed on his left arm, and then he is shown executing a drawing present in the exhibition based on the tattoo. Tellingly, Mager is later seen sitting in the park reading A Watership Down before retiring back to Brooklyn for drinks and bed. The whole narrative unfolds in undeniably beautiful time-lapse images that could be enjoyed unconsciously.

Mager’s score is also hypnotic and haunting, adding to his romanticized view of inspiration. This overt romanticism is problematic and obvious. In addition, debts to pop culture influences like Donnie Darko and Pearl Jam’s 1995 album art for Vitalogy make the video feel stylistically derivative. Nevertheless, it is a darkly beautiful meditation on influence and inspiration.

Michael Yinger’s floor installation of a swastika made of crushed beer cans, little drug bags, razor blades, and panties is an ode to the self-destructive impulses that too often accompany the artistic life. Yinger, raised a Buddhist, refers to the pre-Nazi meaning of the swastika as source of life and beauty. In a painfully sincere reversal, Yinger creates a self-portrait that echoes Mager’s autobiographical video. The montage relationship between the two works develops into a kind of dialectical confessional.

In the gallery causeway, Jeffrey Kilmer, presents photographs of beautiful young men in seductive poses. The subjects are apparently all the kind of men that the artist would like to sleep with; they are the objects of desires that are most likely impossible to fulfill. The hipster subjects are implicit in the exchange, posing seductively like the rock star images they seek to project. It is the same impulse that haunts both Mager and Yinger in different ways.

The show is unabashedly earnest and romantic, like a late nineties Emo ballad, giving the exhibition an emotional edge. With the recent interest in the rough hewn, ramshackle art of the East Village, this show is a reminder that there are still artists willing to address feeling before critique.

Trio is a fine, well-tuned novel with plenty of perfectly-paced drama, wit, and intriguing plot twists that accompany its more serious themes about privacy, secrecy, and Camus’s one fundamental philosophical question from which all questions follow.