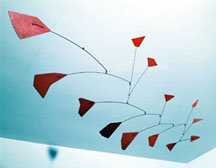 After comparing selections from the oeuvres of Alexander Calder and Joan Miró in an exhibition co-organized by the Fondation Beyeler, Basel, and the Phillips Collection, it might be impossible to ever study either artist’s work again without thinking of the other. From a first meeting in Paris in 1928 to Calder’s death in 1976, Calder and Miró spoke frequently, visited each other with their families in France, Spain, and the United States, and remained involved in each other’s artistic developments. To honor this companionship with an exhibition of a wide range of works spanning more than 50 years offers a unique opportunity to review two of the 20th century’s best known artists in a new frame.

Installed chronologically, the exhibition unfolds smoothly, segmenting decades and important series into room-sized portions that allow the viewer to focus closely on single works. Interrelations between similar palette, simplified form, and symbolically charged subject matter dominate, transcending the obvious differences between two and three-dimensional media. Realizing how intertwined Calder’s and Miró’s works are, one cannot avoid the obvious question: Who influenced whom? Calder may have summed it up best when he said “Well the archaeologist will tell you there’s a little bit of Miró in Calder and a little bit of Calder in Miró.” When looking at early works completed before 1928, similarities are already apparent, especially in the artists’ fascination with the freedom and playfulness of childhood.

In a prelude to later years, Calder/Miró opens with the juxtaposition of a wonderful selection of Calder’s circus figures from the 1920s, toys made of wire, wood, and cloth, and Miró’s “Carnival of Harlequin” (1924-5). Whereas Calder’s small figurines and animals were used as puppets in the performance of Cirque Calder, Miró’s depiction of his Paris studio is no less animated. Filled with fantastic creatures and objects, which infiltrate the otherwise sparsely furnished room with color and life, the composition weds the odd with the obscure. Cats are playing with a ball of yarn as a butterfly steps out of dice; rooster heads rest on stilts, while elongated cigarettes, ears, mermaids, fish, guitars, musical notes, and globes float freely in space.

As the exhibition progresses, so does the artists’ visual liberation from representational spaces and worldly confinements. Limitations formerly embodied by the artist’s studio or the imaginary outlines of a circus tent, give way to a larger universe as both men became increasingly intrigued with cosmological relationships. Whereas Miró had been fascinated by this subject matter since the early 1920s, leading to his famous work “The Birth of the World” (1925), it is not until 1931 that Calder began to introduce freely moving parts and geometric shapes into his work. Viewing “The Birth of the World” next to Calder’s “Mobile au plomb” (1931), the latter almost manifests itself as sculptural rendition of Miró’s painting. In Calder’s work, the painted geometric shapes—white, red, and black circles and a black triangle—are translated into identically colored globes and shards. Connected by wire, each element is suspended from a main axis, which is solidified by a pyramid shaped base. As a standing mobile, “Mobile au plomb” further introduces the concept of motion, allowing each element to move as interdependent and balanced as a solar system.

It is interesting to note that “The Birth of the World” and “Mobile au plomb” set a precedent for each artist’s later work. As Miró continued his pursuit of a semi-abstract style rooted in symbolism and naïve primitivism, which combined geometric and biomorphic forms that always leave a trace of a figure, an eye, or a fantastical creature, Calder’s embrace of abstraction was complete. As Miró’s work gets more symbolic and Calder’s sculptures more abstract (a development that was significantly sparked by his visit to Mondrian’s studio in October 1930), the dialogue between both bodies of work changes course. Rather than reflecting parallels, the works now begin to interpret each other, giving Calder’s sculptures a new poetic substance and Miró’s paintings a stronger sense of physical movement and mystical truth.

One can find Miró’s ghost-like creature from “Painting (Man with Pipe)” (1925) in Calder’s large circular sculpture “Untitled” (1931), in which two suspended globes seem to indicate eyes. Similarly, one might discover Miró’s “Portrait of a Young Girl” (1935) in Calder’s abstract “Yellow Panel (Form against Yellow)” (1936), or look for the image of Calder’s “Wooden Bottle with Hairs” (1943) in “Dancer Hearing an Organ Playing in a Gothic Cathedral” (1945), without having any real proof that these works pay direct homage to each other. There were shared themes that both artists worked on together in Paris—such as a series of portraits from 1930 to 1931, including semi-representational wire-renditions by Calder and abstract paintings by Miró—as well as simultaneous developments that occurred during periods when the artists were unable to visit each other—such as the increased density of Miró’s “Constellation” series from 1941 and the increased complexity of Calder’s “Mobiles” and “Standing Mobiles” from the early 1940s.

As if to stress the extent of the two multifaceted oeuvres, the exhibition culminates with a room that brings together Miró’s largest painting, a 30-foot mural that was commissioned for the Terrace Plaza Hotel in Cincinnati in 1947, and Calder’s “Louisa’s 43rd Birthday Present” (1948), featuring five miniature standing mobiles of which the height of the smallest one hardly exceeds one inch. Looking at the floating forms and rich colors, it becomes clear that what both men shared most and what had the biggest impact on their work was their joyful embrace of life and their serious devotion to the celebration of freedom of form and play.

What happened in Łódź two months before her birth: the Germans forced 160,000 Jewish and Roma inhabitants into an area of the city—a new ghetto—far too small for that many people.

Eamon Ore-Girón: The Symmetry of Tears

In golden and grandiose paintings like cosmological topographies, Eamon Ore-Girón uses a geometric and mathematical language to reconsider the value and meaning of ancient aesthetic systems. Building upon medieval, colonial, and ancient Andean influences, Ore-Girón’s work allows multiple truths to exist in harmony and perhaps suggest new ways of thinking about how the past persists in the present.