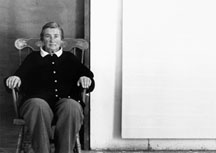 Maybe it was in 1972 that I first saw actual paintings by Agnes Martin, at Robert Elkon Gallery in New York. There was excitement in the city on the part of her fans—this was the first show in some time. Those may have been the first new works since she stopped painting some years earlier.

The grid. Martin was a painter who could make the grid into an icon, a logo, the grid that Rosalind Krauss wrote about later as central to Modernism. And yet, is there any other grid painter who made the form so much her own, so that in some way we can say there is no other grid painter? And was the grid what she was about, anyway?

I met Agnes Martin through Dale Henry or Lucio Pozzi in 1973 or 1974 when she was in New York for a talk at Cooper Union. Her talk, as often, was about the perseverance involved in being a painter, and the need to “see.” Afterwards a few of us went to a nearby café or bar to drink margaritas where she paid for all saying she had just made money in Europe with prints. As we sat there she spoke directly to each of us, all painters, and to me she said, or asked, “Are you strong?” Then, looking me in the eye, “You will be a good painter.” It seemed that longevity might be part of that.

The Canadian Agnes Martin lived in the desert of New Mexico. The horizon and the color that surrounded her are perfectly expressed in her six-by-six foot (later five-by-five) square paintings that produced a meditative space. The painting itself becomes an object of contemplation able to carry to the viewer not only the serenity that I am sure she found within as she worked on these paintings, but an intimation of the woman herself, that woman concerned with morality and with spirit.

On the personal side she became a legend when she left her studio, friends, paintings, and supplies in New York City, and drove off across the country to settle in New Mexico—across the mountain from Georgia O’Keefe. I know more of the legend than of the actuality, but I can say she found isolated land near Cuba, NM, and there, over time, built herself a house while living in the desert, no phone connection, no computer, driving into town for supplies, receiving the rare guest who wrote ahead, then followed instructions for finding her. After the construction of her house, there was the studio—reportedly she dug down four feet to be able to build six-foot walls resulting in a ten-foot interior height.

She did live long, moving to Galisteo and eventually to Taos and dying only now at the age of 92. And soon after her very recent show at PaceWildenstein in New York.

There have been other times our paths crossed. Students in a class called Women in the Arts that I was teaching at Hunter College chose to invite her to speak, and she did, caring for her image, carefully checking out seating and lighting possibilities in the auditorium before the talk, deciding to stand on the floor level rather than to sit on the stage, reading her text, answering a few questions, then abruptly marching up the aisle and out of the room. Her talk was titled “What do we not see when we do not see?” It has since been published in a collection edited by Dieter Schwartz through the Winterthur Museum in Switzerland.

A phrase from the catalog for her Whitney exhibition describing her as the most famous unknown artist of the time rings often in my mind. Her work was not that which would capture a general public as Andy Warhol’s did, but then this may be true of Minimalism more broadly. Her meticulous attention to the execution of carefully planned paintings resulting in a “desert” of color and line could not appeal to a pop public—though one day it might.

The two images, of Martin herself on the one side and that of her grid paintings on the other, stood for her with equal power—a correct morality in a work-intensive form synthesized into lyric poems from the desert and the heart.