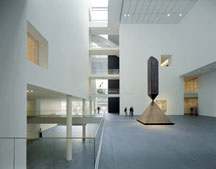 As an art historian, an art critic, and an émigré living in New York, I am used to seeing things through other peoples’ eyes. Two friends came to attend one of the openings at the new MoMA. They were museum directors from two different, distant lands. My friends were very impressed, if not overwhelmed, by both the building and the display of art inside it. I suspect they compared their museums to MoMA, realizing that they will never be able to come close to the New York giant (however, they might be able to push their institutions in the same direction). Like the U.S. on the political scene, MoMA—for good and for bad—sets the standards for the entire world.

A few days after the openings, I had lunch with a friend who is an art critic, and, unavoidably, the conversation turned toward the new MoMA. This time, the “we versus them” aspect of the place took on a different meaning. We consider MoMA a part of precious space, a space that, we want to believe, belongs to all of us—like the country. We noticed that our MoMA might still be ours, but its new “decorator” was chosen without our consultation. He (it was definitely still a “he”) was different from the old one: a French avant-gardist who, chauvinistic as he might have been, traveled around the world to learn new things about art. This cosmopolitan figure has now been replaced by a homegrown one with a taste for minimalism, a man who strips the world to its essence and then positions it on, or just below, the ground. From the perspective of a giant, the world must look quite small and quite the same.

Later, it occurred to me that in one sense, American and European art can be compared to cheese: In Europe, cheeses usually smell, but in America they are usually odorless; otherwise, they look pretty much the same. Then it dawned on me: “That is what has happened to Picasso’s “Les Demoiselles d’Avignon”—it was not cleaned, but pasteurized.”

Bartelik is an art historian and art critic specializing in 20th century art and theory of art.

The latest two films of Cambodia-born filmmaker Rithy Panh, Everything Will Be OK (2022) and Irradiés (2020), are premiering in North America at MoMA, as part of the first-ever retrospective of his 30-year-long career.

Sister Séance, the most recent novel by Aimee Parkison, far surpassed my proclivity toward all things strange and unusual and emparted a new context for one of the greatest and most fascinating movements of the 19th century.

In Alix Le Méléder’s current exhibition, only her second solo in New York, there are the types of big, commanding, difficult abstractions that are not so common these days. All the better to see them freshly, and this work is of the first order.