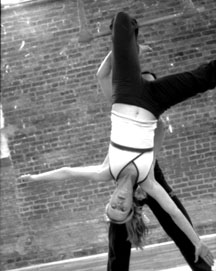 A student learns the trapeze at Lava Studio. Photo by Robin Graubard.

On a Wednesday night at the Lava Studio in Prospect Heights, three students work on various techniques, including what’s known in the trapeze world as the bird’s nest, the plonge, and the gazelle, while others wait their turn, keeping warm doing handstands against the wall, crunches, splits, or handwalking on the mat. The 1200-foot studio is on the ground floor and has a sprung wood floor, rigging pipes for the trapeze, and 12-foot ceilings. One side of the wall is exposed brick.

The brawny all-women’s acrobatic dance troupe Lava has been performing trapeze duets, diving through hoop rings, turning cartwheels, swing dancing, playing football, and hula-hooping in performances throughout Manhattan at such venues as the Kitchen and Dance Theater Workshop since 1999. Energetic and thought-provoking, their performances have been called “an exhilarating mix of circus and dance” by Newsweek. Now Sarah East Johnson, artistic director of Lava, has opened up a studio in Brooklyn for circus training. 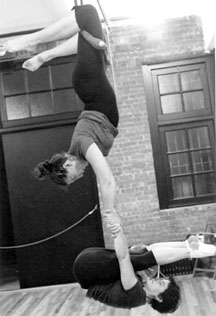 Diana Greiner with a student at Lava Studio. Photo by Robin Graubard.

“For people living in New York City who want to be physically fit and have a relationship with their bodies, the choices are limited, and I would love for anyone to be able to come into a Lava class and feel a sense of their bodies, a connection with other people and their creativity,” says Johnson. “It’s not a gym. It’s not a sport. It’s acrobatic art.”

Lava’s women—who include Johnson, Natalie Agee, Molly Chanoff, Diana Greiner, Eugenia Chiappe, and Rebecca Stronger—work hard on their performances, and Johnson wants that same rigor and discipline to be reflected in the classes. Strengthening and warm-up exercises make the workshops more manageable. Warm-ups normally begin with some kind of cardio work like running, abdominal exercises, and handstands. Classes are available to adults, kids, and teens separately. In the past, Johnson has taught students whose ages range from five to fifty, and although the troupe is all women, men are welcome to attend the workshops as well.

Johnson has lived in the upstairs apartment of the Prospect Heights building for 12 years, since it was a raw warehouse space, and had always envisioned a studio on the first floor of the building. Recently she had the opportunity to buy and renovate the building. Neighbors passing by might see the various classes in progress such as handstands, which Johnson describes as one of the most useful tools in acrobatic training. This class is taught by Stronger, a purist who focuses on perfecting that trick.

Trapeze class is taught by Gagnee and Greiner and includes teaching students of all levels how to get onto the trapeze, how to increase strength and flexibility, get oriented, learn how to perform in a confined space, and of course, deal with fear. Johnson says, “Fear becomes a practice—you do it even though you’re afraid of it.”

Their acrobatic classes are divided into beginners and advanced and are taught by Chanoff and Johnson. Lava’s acrobatics are based on the Chinese style and include handstands, tumbling, partnering, and improvisation. “People will end up touching each other, supporting each other, and will end up making something together,” Johnson says. “This is a social form of physical practice.” Johnson has observed that in other fitness classes such as yoga, people don’t really work with each other, whereas the acrobatic classes provide an opportunity for people to interact.

In addition to classes in tumbling and Iyengar yoga, there is a pay-what-you-can open workout for adults, kids, and teens separately and a family class that Johnson hopes will take off. Besides teaching adults and children the basics, such as somersaults and cartwheels, she will also teach partnering. For example, the kids can stand on the adults’ shoulders or walk on the adults’ hands.

Johnson, who studied ballet and modern dance, received most of her own circus training through Circus Amok. She met Jennifer Miller, aka the Bearded Lady, at a dance performance and after that hooked up with Circus Amok for nine years. She learned acrobatics, juggling, stilt walking, and even fire eating. As opposed to modern dance, Johnson found the circus to be more celebratory and accessible to audiences. While studying geology and biology at Empire State College, she observed how geology was choreographic. Shortly afterwards she began to form Lava.

She met the members of her troupe through performances, a wedding party, an audition for Lava, and at the San Francisco School of Circus Arts, where she has sent her troupe members in the past for intensive acrobatic training. They picked up trapeze by watching videos, making up their own moves, and by attending occasional workshops with various artists who include the Cirque du Soleil twins, Elsie and Serenity.

Though Circus Amok is concerned with community politics and tackles issues such as the Department of Education (in one acrobatic performance piece, adults dressed as schoolchildren try to steal test scores from a teacher), the war in Iraq (jugglers crack ironic jokes about the war on terror), and the GOP convention (they make an elephant disappear), Lava is political in more subtle ways. As an all-women’s troupe, they speak to feminism.

“Lava has come to represent community, strength, feminism, and gender empowerment,” Johnson says. “When men are around they spot, lift, and support women, but when men are taken out of the equation, women have to do these things for themselves.” Watching six strong women in action, jumping through hoop rings or standing on each other’s shoulders, speaks a lot to the untapped strength of women.

Moreover, Lava presents a critique of the way science is used in our culture. Johnson thinks that science can be alienating to people, and if they can understand science through their bodies, it makes them more in control of their environment. Video footage is created by Nancy Brooks Brody and incorporates images of waddling penguins, hermit crabs, erupting volcanoes, battling kangaroos, and slithering snakes.

Johnson, who cites volcanoes as one of her dance influences, says she’s interested in natural cycles and the close relationship between destruction and creation. She talks about how, in wrestling, there can be aggression and physical tenderness in the same dance. Currently, the troupe is working on a show called Whole, which will explore the whole geological history of life on Earth and how we can find meaning in that in the present day.

For more information on Lava’s workshops and future performances, go to www.lavalove.org or call (718) 399-3161.

Emme Lund’s The Boy with a Bird in His Chest

When I sat down to read Emme Lund’s debut novel, The Boy with a Bird in His Chest, I was expecting to encounter a playfully didactic allegory; however, while the story is certainly playful and arguably didactic, I quickly realized that it was also much more: invitingly poetic, defiantly queer, and lyrical to boot.

Workers don’t sacrifice their time and energy on a whim to agitate for better working conditions. As is happening to so many other workers today, the adjuncts are fighting because their backs are against the wall.