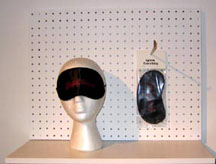 Finally, thank God it’s over, at least for some people. I received a sincere e-mail from a lady painter whose work I follow. It was soliciting signatures for a petition to investigate “voting irregularities” sponsored by moveon.org. I wrote back counseling her to “grow up...accept the choice of the people...and to move on.” She flamed me, her grief still achingly fresh. Maybe they can investigate the “irregularities” in game four of the play-offs with the Red Sox while they’re at it.

Benedetto Croce in section six of his essay “Aesthetics” from the Encyclopaedia Britannica (Fourteenth Edition) subtitled “Art is not instruction or oratory,” writes, “Hence arises what Schiller called the ‘nondetermining’ character of art, as opposed to the ‘determining’ character of oratory; and hence the justifiable suspicion of ‘political poetry’—political poetry being, proverbially, bad poetry.” What Croce is saying, and I generally agree with, is if one makes art with the explicit intent of conveying purely political content, the work is doomed to the status of propaganda, and without other elements, i.e., humor, satire, social criticism or irony, even good propaganda has little staying power. So it was with some trepidation in this political season that I encountered The Ballot Show.

Daniel Aycock invited 37 artists who share some of his ambivalence and skepticism about the voting process, as well as his conceptual and subversive approach to art making, to participate. The only criteria were that each work be about the voting process and that the viewer be given a choice, be required to make a decision, even if that choice is between crap and crappier. Jeremy Slater programmed a computer with an official-looking voting screen. However, when the mouse is clicked, a notification of failure pops up, or a denial of your vote, because your last name sounds foreign, or the system crashed, or any number of glitches intended to disenfranchise. Indeed, disenfranchisement seems an unstated theme among many of the pieces seen here. Another odd coincidence was that, by the time I visited the show, many of the works with mechanical parts were malfunctioning, an unintended parallel to the actual process. Others had been tampered with. For example, Miho Suzuki’s delicate installation with matching Chinese take-out cartons labeled JFK or GWB on a beam scale had obviously been “stuffed.” In front, red, white, and blue grains of rice formed into small flags on elegant rectangular black dishes with matching chopsticks. Beside each container is a small cup of red or blue rice. One grain placed in one container represents one vote.

One of the several ballot boxes, Jerelyn Hanrahan’s is a tall square column in natural white pine, with “BALLOT BOX” stenciled near the top; a Plexiglas front forms a visible receptacle below. On the left side are hooks with a punch and ballots listing George Bush, John Kerry, Ralph Nader, and Courtney Love. (I didn’t know you could run for president while still in rehab.) Insert your ballot, a motor groans into action, and bingo, your ballot is shredded before your very eyes and floats onto a drift of hundreds of other shredded ballots. Chris Dam and Leah Stuhltrager’s collaboration was one of the few less serious, more whimsical presentations. Installed on a column in the center of the gallery, a string of red and blue color cutouts of the candidates ascends toward the ceiling. Below is a depiction of the White House attached to a basket that looks surprisingly like a butterfly net: politics as lepidopterology. Interesting. Presidential libraries would then amount to finally sticking a pin through them and displaying the politicos in a glass case. William Powhida continues his sardonic series of “Enemies Lists” with “The Williamsburg Public Enemies List Ballot ’04.” Ballots suggesting candidates for the most reviled people and things in the neighborhood include former Williamsburg art dealers and their dogs, the Yankees, Matt Laurer, even fellow artists in the show. Powhida then draws a grid of caricatures based on the results and includes biting commentary like “trust fund socialist” or “King and Queen in the land of description.” Nasty stuff, but hey, the people have spoken.

As if in a five-and-dime store display, a Styrofoam head sits on a shelf with peg-board backing. It wears a black sleep mask adorned with “Blissfully Unaware.” Next to it, another mask still in its “factory packaging” hangs on a peg with the label “Ignore Everything.” Aycock is dealing with either the marketing of uninfluenced conviction (not buying the political hype of the “other guys”), or the old complaint that “ignorance is bliss.” Either way, The Ballot Show is rife with cynicism regarding the voting process. In this case, a work that actually celebrates this privilege we all take for granted would appear truly radical. Finally, after all the postelection dust settles, how many of these pieces will still be interesting in ten or twenty years?