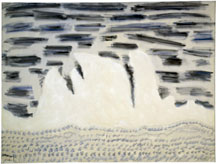 Milton Avery was closer in age to Marsden Hartley and Charles Burchfield than he was to Barnett Newman and Mark Rothko, but art history has retrospectively placed him in the company of those younger New York school artists rather than in his own peer group. When he started working around 1905, painters in the United States were trying to put together an authentically American variant of impressionism. When he finished in 1965, the fanfare of abstract expressionism was already winding down. Avery’s art was never really in sync with any of this, but the consistency of his peculiar vision throughout the upheavals of style and philosophy in this span of time is a quiet triumph.

Onrushing Waves uses Avery’s seascapes to chart his development as an artist over a period of 50 years. The earliest watercolors are breezy touristic views, complete with tugboats, bathers, and fishermen. The later canvases preserve this Platonic form of the American seascape—beach, rocks, whitecaps, an occasional bird—but present it with such abruptness that it becomes a disorienting experience, as stripped down and physically confrontational as any Barnett Newman.

Looking at the evolution of the work, one gets the sense that Avery’s encounter with European modernism was amiable and relaxed. He adopted Matisse’s decorative reduction and flattened pictorial space and kept on making pictures of the ocean, without displaying the anxiety that many other painters felt in assimilating the new modes. Avery never felt the need to abandon the American realist tradition, as if it were a provincial accent one tries to lose when moving to the big city. Instead he borrowed liberally from the innovations coming out of Europe and plugged them directly into a format of landscape painting that remained largely unchanged from his earliest work to his latest.

What did change, and what marked Avery as belonging to the future of painting rather than its past, was his increasing insistence on the physicality of his tools and materials. Avery was a master of the thin, scratchy, inelegant gesture, in which the brush’s drag against the grain of the canvas makes one aware of the painting surface almost before one notices the paint. It has a sense quite different than de Kooning’s agitated full-brushed smears or Rothko’s interminable worrying of an edge. Avery’s studiedly awkward marks are casual, beach-going, and one would be hard-pressed to see them as expressive of anything. It sometimes seems as if the artist were falling asleep in mid-stroke, and these marks record his slide into complete relaxation.  They’re not particularly beautiful, and in some instances the dryness of the brush and the thin acidity of certain colors are as irritating as sand in a bathing suit.

Almost miraculously, though, when taken together they form a kind of writing that encodes the complete sensory experience of spending time with the ocean: the repetition of sounds and the endless minute play of light and shape in waves and clouds. The materiality of these paintings, both the emphasis on surface as well as the representational touches—the seabirds, the scraggly trees—are incessant reminders of the physical world and keep the painting from drifting into the ether of pure abstraction.

Despite these achievements, Avery is still sometimes regarded as a minor annex of the New York school, a boutique where the big ideas of abstract expressionism were packaged in a less challenging format for easier consumption. For Newman and Rothko, the landscape was a metaphorical departure point for the voyage into nonobjective painting. Avery preferred to remain on the shore, and history has faulted him for this reluctance to travel.

A more profitable interpretation, leaving aside the Greenbergian story of modernism as a movement leading inevitably towards abstract art, is that Avery’s insistence on representation designates him as a member of an essentially different tradition from that of his younger colleagues. Avery bridges the gap between someone like Albert Pinkham Ryder and someone like Fairfield Porter. He applied School of Paris strategies to the homegrown tradition of the idiosyncratic, reductive American landscape painting and pointed out a less-trodden path for legions of later artists who wanted the entire experience of modernism in art but who preferred to keep making pictures.

In looking at these works, one gets a strong sense of Avery’s temperament, without the feeling that he was really trying to express himself. There is a quality of reserve in Avery’s work, together with a resolution to keep the landscape from becoming the foil in any trivial debate about the picture plane, or worse, a projection of his feelings. It’s an achievement more notable for being easy to miss, to make a painting of the ocean that isn’t a metaphor for anything.

Avery’s reductionist approach is seductive; he is not a believer in the imponderableness of infinity and instead chooses a localized vision of the world.

If naming an object kills it, looking directly at a bewitching scene, even in memory, kills it.

Theater in the Wild: The Motor Company at Large in NYC

LaundryFest is the third iteration of The Motor Company’s mission to create site-responsive theater—a type of theater that is written especially for, and because of, the space in which the play will be performed.

I first discovered painting conservation while on a tour of the Getty Museum. I remember entering the conservation lab and seeing Old Master paintings on easels and tables right there in front of me. The conservators, oblivious to our little group, were intent on their work.