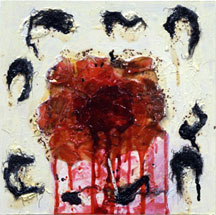 I have appreciated Joan Snyder’s ability to charge her imagery with exuberance and intelligence and visionary celebration in past exhibits. While her new body of work, entitled Women Make Lists, takes on an elegiac tone (it is dedicated to the women and children of Iraq), Snyder’s largescale paintings—filled with rainbows of pastel colors, dotted and punctuated by dripping blotchy wounds, hearts, nipples, bloody lakes—feel like the funerary foot stomping and hair pulling of women portrayed on Greek vases. They bring up the question of whether Snyder’s expressive gestural approach—even as concrete as she makes it with dried flowers, herbs, and wood that jut from the canvas surfaces rather accusingly—still falls short of embodying her intention to bring us to an empathetic recognition of her subjects.

Snyder’s often-successful celebration of an essentialist feminism is put to the test here. Confident in their mark making, masterful in their control of space and color, this series as a whole suggests our cultural insularity. The words scrawled across the surfaces of these works, like “Mamilla Immortals (the Breast that Never Stops Flowing)” feels like a metaphor that needs to be reconceived. However, the sense of helplessness here is real, and alludes to the very isolation that has allowed our leaders to convince the American public to stay in Iraq after deposing Hussein. Can Snyder’s universal vision reach across the gap to embody individual and collective battles of Shiite, Sunni, and Kurdish Muslim women, from all classes? In this series, Snyder’s adaptation of her already well-developed gesture to a grander ambition generalizes more, rather than less, and in doing so it makes me ask where the personhood of these women is.

While our first painter of democracy and living history, J. L. David, need not be the prototype for a stylistic approach, his advice on its requirements remains useful: months of research into the culture and the thought of its subjects. A century later, Picasso, reaching for a high bar of stylistic synthesis to conceptualize his shamanic vision, made hundreds of preparatory drawings for the making of “Demoiselles d’Avignon.” He described his process as a “sum of destructions.” Here Snyder changes some of the ingredients in her stylistic cauldron, but in addition she needs to gather and stir in a fresh rhetoric of consolidated ideas.

Every artist creates a fiction that asks the viewer to be seduced, convinced, or at least to suspend her own skepticism, and share, however briefly, the artist’s vision. Ironically, it may be the demands of the marketplace to fill a large gallery that compromises Snyder’s sincere impulse to make a singularly strong statement. The call for painting to partake in living history is a demanding task, even as we suspect the mutability and ephemeral character of empathy and righteous anger to remake our cultural and political landscape. We can leave the scene and just go about our lives, changing nothing, yet briefly feeling the pain.

Postwar Women concentrates on the work of women who attended the Art Students League, emphasizing art made between 1945 and 1965 and including pieces created before and after those periods. The League has been particularly open to women, presenting them with the chance to study beginning in the middle of the 19th century (it opened in 1875).

Not since an exhibition of Warhol’s screenprints some years ago have I elected to write about the work of this monumental art world figure. Despite the controversy at that time, focusing on the history of Jews in the twentieth century, these prints seemed to hold resonances, both aesthetic and political, yet dissimilar to those embedded in Warhol Women.