When Melissa James Gibson's play [sic]— whose title, like its meaning, is indeed "exactly as written"— premiered at Soho Rep in 2001, I was really excited by the formal coherence of the production. Recently, I had a chance to read some of her plays on the page, and I realized that she had included all of the intricate choreography, sound design and architecture of the world in her original stage directions.

Radiohole is Still Their Name

This combination of parody and seriousness reflects the contradictions of an era in which we find ourselves confronted with the urgent necessity and the near impossibility of initiating and carrying out a totally collective action— an era in which the most serious ventures are masked in the ambiguous interplay between art and its necessary negation, and in which the essential voyages of discovery have been undertaken by such astonishingly incapable people. —"Détournement as Negation and Prelude," from Internationale Situationniste #3, 1959 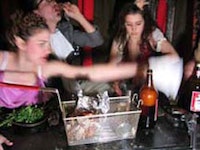 Uncle Sam Has No Clothes

"Those attempting to find a plot in it will be shot," declares Mark Twain with his opening words to The Adventures of Huckleberry Finn. Now the National Theater of the United States of America (NTUSA) throws down its own gauntlet, serving up a mutant piece of this same American pie in DUMBO with its latest collective theater piece: What’s That On My Head?

Scene One The Toadstool sings a song lamenting that his life is at a standstill. He can’t go anywhere. He feels damp. An expansive fungus creeps in to enlighten the toadstool. Fungi can take over the world! The toadstool must spread his roots and travel to exotic places.