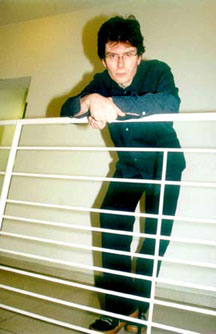 Caryl Churchill’s penchant for innovation and experimentation has earned her a secure place among anyone’s list of most important contemporary dramatists. Since Owners made its 1972 debut in her native London (at the Royal Court Theatre Upstairs), and here in New York the next year (at the Mercer-Shaw Theater), her work has consistently enjoyed success on both sides of the Atlantic. Her widely anthologized plays like Cloud 9 and Top Girls are standard fare on college stages and syllabi throughout Britain and North America, but she has never been content to rest on her laurels and settle into a distinctive style, and instead continues to test the formal and thematic limits of the English speaking stage.

The last three plays of Churchill’s produced in New York (The Skriker at the Public in 1996, Blue Kettle at BAM in 1998 and Far Away at New York Theatre Workshop in 2002) shared in a palpable sense of the catastrophic, speaking directly to our millennial and then post-9/11 cultural anxiety. The philosophical and theatrical daring Churchill offers with her latest, A Number, might well be said to be by now in her career an expectation. Yet again she taps into our most contemporary concerns, if not fears. Ostensibly an examination of the ethical and emotional consequences of human cloning, a father talks with three of his offspring in five scenes.

The original production at London’s Royal Court in the fall of 2002 met with widespread acclaim. With a director (Stephen Daldry, The Hours and Billy Elliot) and cast (Michael Gambon, The Cook, the Thief, His Wife and Her Lover, as the father and Daniel Craig, Road to Perdition, as the son/s) familiar to American audiences for their film careers, it wasn’t a question of when but how soon it would come here, and if the production would remain the same.

The casting of legendary playwright Sam Shepard (returning to the stage after a more than thirty-year absence) as the father and Dallas Roberts (returning to the Workshop, where he impressed in Adam Rapp’s solo Nocturne) as his son/s, under the direction of James Macdonald, indicates that the New York premiere will be something more than just a clone of the London production.

This marks Macdonald’s fourth collaboration with Churchill, having directed Hot Fudge, Lives of the Great Poisoners, and Thyestes. Macdonald regularly directs the Royal Shakespeare Company, but is best known for his staging of new, often controversial plays, such as the definitive productions at the Royal Court of Sarah Kane’s Blasted, Cleansed and 4.48 Psychosis. Although the one-week visit of his revival of 4.48 just this past last week of October is technically his New York directorial debut, A Number will be his first attempt at directing American actors on the American stage.

James Macdonald met with The Brooklyn Rail at the end of the first week of rehearsal, mid-October, in an office of the New York Theatre Workshop to discuss the play.

David Kilpatrick (Rail): How much will this production of A Number differ from the original production directed by Stephen Daldry at the Royal Court three years ago?

James Macdonald: I’m doing something a little bit different from what Stephen did. But then, of course, any director who prides himself will do something different than what the last director did.

Rail: In terms of Churchill pieces the play seems one of the least imagistic.

Macdonald: It’s a play that resists heavy staging. It is very much about what is going on internally between these two (or these four, depending on how you look at it) people, and that has to be the main focus. And in a way the more pure you make that focus the more the play’s gonna work; it has to be the aim.

Rail: Are you making any minor adaptations to the text for the American stage, changing pounds to dollars, etc.?

Macdonald: We’re doing a little bit of that, but it’s been very gratifying to discover how little there is to do. The play’s so open actually, and so not culturally specific that we’ve had to change very few references, and apart from that it sounded (to my ear at least) great for an American audience.

Rail: It’s a rather time-tested device—the idea of the double or the twin—but the idea of cloning seems rather timely. Do you find that in the context of the debate over stem-cell research and things of this nature that it is a very timely play, that this is a particularly opportune time for such a consideration of the power of technology and the future of human identity?

Macdonald: I think the play isn’t really a debate play about medical ethics. But by the same token Caryl—as she very often does—follows contemporary cultural developments and is bang-up to the minute in what she’s talking about. So it’s not the primary focus of the play to debate that stuff, but one can’t deny that it’s interesting at the moment to see a play which for most of its duration makes a very strong argument against cloning and then flips that in its last scene to do the most provocative thing you could possibly do at the moment.

Rail: Is it more important for Dallas Roberts to emphasize differences between Bernard #1, Bernard #2, and Michael Black, or is it better for those differences to be understated?

Macdonald: Well, I don’t know yet where we’ll end up with it, but I think it is important that there is a balance. I think one could overstate the question of similarity or the question of difference. And in a way we’ve got to the science of how the genes of identical twins will encourage them to be similar, but culture will encourage them to be different or experience will create difference. That’s part of the fun of doing this play, I think, for an actor playing this part, is to make the difference. But by the same token, because the story says on one level they have this innate similarity, then you have to tell that story as well. You have to find a way to tell both stories without over-egging either of them.

Rail: Sam Shepard called A Number the most brilliant play since Waiting for Godot…?

Macdonald: I think I did hear that, yes.

Rail: How would you say this play ranks among her most significant plays? Does A Number mark some kind of departure for Churchill? She has a reputation for always re-inventing herself.

Macdonald: I can’t get terribly excited about the idea of “ranking,” but I personally love it. I think it’s an extraordinarily dense and interesting play and a wonderful thing for two actors, and for a director as well, to engage with.

I think like any very good writer she reinvents herself from play to play. This play is different from the last one, which is different from the one before. You could say it is a new thing for her to write a play exclusively for two men. The subject is a new subject for her. It’s short and her plays have been short recently, so there is continuity there. She’s found a new linguistic style, which is particular to this play, but like any good writer she will do that from play to play.

Rail: Why would you say a new linguistic style?

Macdonald: It seems to be a play in which two people are under such stress that they can’t end their sentences a lot.

Rail: She’s famous for the slashes in the text to indicate overlapping speech.

Macdonald: But she’s not doing that in this play, so, no. I think that she’s just written this one in a way in which it seemed to need to be written and that’s made so much of the differences there.

Rail: Those exchanges in Blue Kettle [the second one-act of the double-bill Blue Heart], between the would-be son and the would-be mothers, has sort-of that conversational space, in terms of “are you my parent, and what kind of relationship can we have?”

Macdonald: Well, the themes that are in this play are the themes that go around and around in her work everywhere, really. I think the central themes of identity, parents and children, cruelty to children, freewill against determinism, those are all themes that have been in her work for thirty years, really, and in greater or lesser degrees in different plays. So in a way, it’s like with all writers—they have a set of ideas with which they engage with the world.

Macdonald: I love Sam’s work and I’ve directed three of Sam’s plays, so it’s a pleasure and a privilege to work with the man himself. I adore this story of his admiration for her work, and to have the two of them in the same room at the same time is just…

Rail: It seems to me that with his character, Salter [the father], as soon as you judge him you’ve lost him. Is there a point of identification with any one character or viewpoint?

Rail: A suspension of the ethical? Do you care whether the audience sees it in one way or the other?

Macdonald: Yeah, I think quite a lot about the journey that you are helping an audience make through the story. I don’t know how much I think about the ethical. That sounds a bit alarming, doesn’t it? I always think it’s alarming if a writer seems to be peddling a particular line on something and I think good writers, extremely good writers, will not peddle a line. Just when you think they are peddling a line, they do the opposite. But any good play makes life more complex. If you know what the play’s going to say then it’s hardly worth going to see.

Edwin Torres is a NYC native and editor of The Body In Language: An Anthology (Counterpath Press). His books of poetry include; Quanundrum: i will be your many angled thing (Roof Books) which received a 2022 American Book Award, Xoeteox: the collected word object (Wave Books), and Ameriscopia (University of Arizona Press). Anthologies include; New Weathers: Poetics from the Naropa Archives, The Difference Is Spreading: 50 Contemporary Poets on Fifty Poems, and Poets In The 21st Century: Poetics of Social Engagement. He is currently hovering the zeitgeist, occasionally unearthed in Beacon, NY.