Search View Archive
From the First Drums to the Mambo 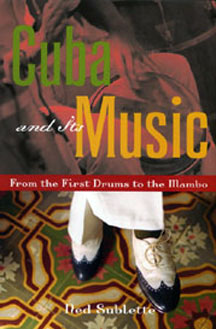 In Cuba and Its Music: From the First Drums to the Mambo, Ned Sublette has taken on no less a task than rethinking and rewriting Western musical history, going back to 1191 A.D., from a Cuba-centric point of view. After a whopping 700 pages, he has still only come as far as 1952 and is already busily working on Volume Two. Sublette’s book is the most all-encompassing, interesting, exhaustive, and downright amazing book about Cuban music currently on the planet. Really—it is a book no musician or culturati member should be without.

Born in 1951 in Lubbock, Texas, and fluent in both Spanish and English, Sublette moved to New York amid the creatively fermenting new-music scene of the seventies and eighties to work with such luminaries as John Cage, La Monte Young, Rhys Chatham, and Glen Branca, and even started his own country punk band. But by the mid-eighties the thrill was gone and he jumped ship for the danceable Latin music world, co-founding Qbadisc Records and producing a number of radio shows on Cuban music. In the early 1990’s he finally journeyed to Havana, becoming a champion for scads of major groups including Los Muñequitos de Matanzas, who—unbeknownst to most Williamsburg residents—actually played a guest stint at Vera Cruz Restaurant in the late nineties, during their weekly Monday night rumba phase.

Since Cuba’s roots are both European and African (“Spanish father, African mother”), Sublette’s book examines Africa and the way its music, culture, and politics flowed through the most fun-loving, gold-digging, sluttish slave port city of the middle ages—Seville, with its melting pot of African, Spanish, and Islamic influences. Sublette follows the path of that most basic of musical instruments, the drum—both revered (by Africans) and reviled (by slave owners)—and explains the differences between the “Islamized music of the North and the indigenous music of the forest south.” He delves, for instance, into the origins of the word mambo, which is “African of the Congo dialect.” Discussing the musical effects of the slave trade in colonial Spain’s most shake-your-money-maker profitable port city, Havana, he points out that, unlike in North America, slaves there were literally worked to death to increase the lucre of the sugar trade. Since they were not bred to be sold (as in North America), fresh supplies had to be imported directly from Africa, a practice that continued in Havana until 1873. These Africans, from four main regions (Congo, Cameroon, Nigeria, Benin), maintained their musical and folkloric traditions through secret societies; they often practiced their own religions (Palo, Abakuà, Santería, and Vodú) hidden behind syncretic, ersatz Christianity. And of course the most important instrument of any religious ceremony was the forbidden drum.

Sublette’s book also dissects the origins of the tango, which originally came from the musical form called the Habenera, and describes how claves developed directly from the hard wooden pegs (clavijas) that held slave ships intact. When struck together, they make the distinctive sound that has become the backbone of so much danceable music, though it has evolved into much more than that. African drums, however, were banned well into the twentieth century in Havana, an astonishing fact considering their preeminence in Cuban music. Surprisingly, the first public presentation of a drum did not take place there until the 1930’s. However, always ingenious, the Cubans circumvented the law by employing wooden crates and furniture to bang against.

There are so many stellar musicians and their musical influences discussed in Sublette’s book that it is impossible to do justice to them here, but one amusing anecdote shows the circuitous, evolving route Cuban music was forced to take. A good number of postwar Americans were introduced to mass Cuban culture through the antics of Desi Arnaz Jr., the goofball singing husband of Lucille Ball on I Love Lucy. What most Americans don’t know is that Arnaz’s father, the mayor of Cuba de Santiago, was well known for his ban on locals playing their drums, inconceivable for a man whose son and namesake would one day become most famous for his adaptation of the Miguelito Valdés song “Babalu,” an Orisha or deity of healing incorporating prominent drumming in its refrain.

During the reign of the violent and corrupt anti-labor president Geraldo Machado (1925–1933), strict prohibitions were issued against drums. Dr. Desiderio Arnaz, a “white” Cuban, was the youngest mayor ever of Santiago de Cuba and married to the very privileged daughter of the Bacardi Rum empire. He strictly enforced the ban and even issued his own edict to suppress the conga parades (featuring racy dances like “The Rope”). He griped that the festivities consisted of a “strident group of drums, frying pans, and howling to the sounds of which epileptic, ragged, and semi-naked crowds run though the streets of our city.” The corrupt Machado was finally hounded out of the country on August 12, 1933, amid widespread looting and the sacking of the Presidential palace. Dr. Arnaz drove with him to the airport to help carry his sacks of gold onto the plane, an offense for which he was promptly thrown in jail. Released in 1934, he headed straight to Miami with Desi Jr. in tow, placing him immediately into a right-wing Catholic high school along with the likes of Al Capone Jr. Bizarrely enough, four years later, at the age of twenty, Arnaz Jr. popularized the self-same conga line his father had foamed at the mouth against, and made it all the rage in the States.

It’s stories like these, mixing music, politics, and irony, that give Sublette’s book its narrative punch. Cuba and Its Music goes on to discuss the relationship of Afro-Cuban music with ragtime, rhythm and blues, jazz, bebop, rock and roll, and even funk. After 700 pages I can hardly wait for Volume Two.