I was about to take a bubble bath and wanted to find something good to listen to on commercial radio. That’s right: good on commercial radio. Go ahead, laugh, but when you can’t pick up WFUV or WFMU, hope springs eternal. As I thrust my palm into the Calgon I heard the ringing riffs of the Flamin’ Groovies’ “Shake Some Action,” followed by the Mooney Suzuki’s “I Woke Up This Morning,” and then “Channel Surfing” by—holy shit!—the Dictators! Who was playing this stuff, I wondered, at 10:30 on a Sunday night? Q-104?? 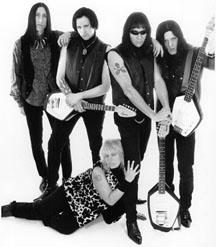 Of course I was listening to Steven van Zandt’s Underground Garage show. It may be pointless to sing praises so well-sung of late, especially after the success of his Underground Garage Festival on Randall’s Island in August, but when you’re old and long past hope about rock and roll, these things mean something. And so I had to know: Was I seeing a rock rebirth, or had I just been missing something ubiquitous all these years? And if it is a rebirth, why garage in particular? Has mainstream exposure like the Underground Garage radio show/fest helped raise awareness, and if so will it now be marketed to death, like grunge? Are we doomed to remain in Matrix-like slumber while hideous corporate entities live off our precious memories of the Ramones?

All of the above, to some extent.

“It’s not like there’s been an explosion of these bands,” Woggles vocalist Manfred Jones told me. “They’ve been there all along, playing in small venues, and periodically there’s a spike when someone has good fortune. The White Stripes have a run of good luck and everyone thinks, ‘Oh, rock and roll’s back and it’s all coming out of Detroit.’ But the fact is that good rock and roll has never gone away.”

“For the last few years it’s been brewing,” said Evan Foster, guitarist for the Boss Martians. “A lot of bands had already started embracing that soulful, go-for-the-throat approach.”

The Boss Martians, from Seattle, are one of the younger bands, with two albums to their credit. On the other hand the Woggles, formed in Athens, GA, in the late eighties, have a slew of albums and seven-inchers. I asked Manfred if they thought of themselves as a garage band even back then:

“We always just considered ourselves rock and roll. But depending on what was in vogue in whatever year, we’d be labeled a ‘retro’ band, and at other times a ‘garage’ band, a ‘rock’ band, or a ‘rockabilly’ band. To me the term ‘garage’ just refers to a more basic, true-to-form rock and roll.”

So why is the term “garage” being bandied about again? According to Star Spangles guitarist Tommy Volume, the term is meaningless:

“Garage, punk, rock and roll—they all mean the same thing. Garage just became a substitute term for rock and roll. which can’t be used anymore because of stupid bands like Kiss.”

Younger fans reading this may wonder where that definition came from in the first place, the term “rock and roll” having been perfectly serviceable for at least twenty years. I asked Lenny Kaye, whose legendary “Nuggets” series of albums, originally released on Sire in ’72 (rereleased on Rhino in ’98) acquainted us with the idea of a “garage” band and its sound, about its naissance.

“Well, these things are lost to history. It just grew out of the conversations of rock writers at that time. The music I put on the original Nuggets was referred to then as punk rock. The whole idea of ‘garage’ grew out of the idea of punk rock, which then turned into a whole different animal. And who started punk rock? Who knows. The giving of a name to anything makes it a thing rather than a conception that’s growing and finding its ground. It’s ironic because the whole point of a garage band is the act of going into that garage and not knowing what you’re going to come out with. What I love about these bands is that sense of imminent transcendence and discovery. When it acquires a definition I tend to be less interested than when it’s a kind of free-for-all.”

Rudi Protrudi, founder of the legendary and long-lived Fuzztones (formed in ’76 as Tina Peel), echoed that sentiment:

“‘Rock and roll’ as a term originally meant fucking. Then it became teen music with a beat that’s basically sex put to music. And how analytical do you want to get about sex? What’s being insinuated is that these bands have a do-it-yourself approach, and that’s pretty much the way it was in the sixties.”

So will the most recent reincarnation of sex put to music be marketed to death, like grunge was?

“Tough call,” said Swingin’ Neckbreakers guitarist Jeff Jefferson. “I don’t think the public at large really has a grasp on the sixties music, the seventies punk, and the stuff that’s coming out today that was influenced by all that. I mean, it could happen, but I don’t think it’s likely. “

“I think the whole ‘garage’ thing is on the decline. But that doesn’t mean good ol’ rock and roll will vanish.”

His bandmate, lead guitarist Will Yates, linked the garage revival to another recent trend:

“It’s somewhere between the swing dancing craze and an actual change in the industry. It’s not quite as faddish as the swing thing, but I think it’s already hit its peak.”

“What the swing craze did,” Lenny said, “was reawaken interest in an overlooked music. It’s a periodic thing. Eighties music is being reinvestigated as much as, I’d say, garage rock.”

So did the Fest create a watershed moment for the record and radio industries? Will we now hear, for instance, the haunting pop-psych melodies of Dave Swanson’s Rainy Day Saints on mainstream radio?

Evan Foster: “Fuck yes! A major fucking rock and roll thing happened. There were 16,000 people when Iggy played. That’s got to be a turning point.”

“If it doesn’t,” Boss Martians’ manager Art Bourasseau said, “the record industry is in worse shape than I thought. The unadulterated raw feeling that rock and roll awakens in people is something the masses have been missing since major labels started feeding them nothing but crap music. If the kids are paying attention, then it’s only a matter of time before the big corporations do, too. And Clear Channel will go along.”

But you used to be able to hear good music on the radio, right?

“Yeah, for some weird reason,” said Jeff Jefferson, “good music was commercial in the sixties!”

“It seems like such a common-sense thing,” said Manfred Jones. “You have your standards, and then you introduce new groups as they come along. But these formats get created, and then burn themselves out because they don’t change—ah, it’s just ridiculous.”

“The brilliant thing about Steven’s show,” said Evan, “is that he plays such a wide range of stuff. He’s defining what he thinks garage is. He’s about the hooks, the melodies, the raw, in-your-face nature of rock and roll. He’s at the helm of a major thing.”

Tommy Volume: “I swear, you feel like a kid again, out in the middle of nowhere, listening to this cool show on a Sunday night.”

So, is the whole thing—the show, the Fest, the renewed interest—pure nostalgia?

Lenny: “It’s because there’s something really elemental about rock and roll stripped down to its atomic particles, to pure electrical energy coming through the amps and projected through a band. You can’t disengage yourself from the timeline. As much as you try to say that the past doesn’t exist, and we’re moving into the future, the music will always be there, in your DNA.”

Evan: “Nostalgia is not what’s going on here. It’s the actual spirit that drives people to decide, ‘We’re just gonna do this, in the face of failure, desperation, even obliteration.’”

Rudi: “People are ready for it, and not just musically but historically. I see a lot of similarities in the attitudes during Vietnam. More and more kids are becoming vocal in their discontent. And if the draft gets reinstated, you watch—there’ll be a lot more garage bands. But something good will come of it: Music will become passionate again.”

And the last word, from Lenny: “When you strip away all the layers, you get the beating heart of it, which is the really strong affirmation of why we have the impulse to rock in the first place!”

The new iteration is part of TITAN, an outdoor exhibition from kurimanzutto gallery in phone booths all located within a short stroll along 6th Avenue between West 51st and West 56th Streets, in Midtown Manhattan. The site, one of the main arteries of the city, was selected for its abundance of advertising and proximity to cultural and financial powerhouses—Radio City Music Hall, UBS, CIB, MoMA, and Peggy Guggenheim’s original gallery Art of This Century.

Oliver Baer does many things. He was the editor of Cthulhu Sex Magazine and Two Backed Books. His poetry has appeared in Literary Yard, Birds Fall Silent in the Mechanical Sea, Dream People, Bare Bone, Boog City, Infernal Ink Magazine, Cthulhu Sex Magazine, Horror Between the Sheets and Horror Writers Association Poetry Showcase Vol. II. His book of poetry, Baer Soul came out in 2011. His CD of poetry set to music, which came out in 2013, spawned a biannual poetry set to music show A Conclave of Baer. In addition, he has written essays and horror stories. His book, Letters to the Editor of Cthulhu Sex Magazine, came out in October 2019. Recently, his likeness has been seen on film in the documentary, "Tai Chi Club" and heard on radio for the experimental improvisational music show "Improbable Confetti". He has performed as an unspeakable horror from the depths of the ocean as well as helped to produce Broadway and Off Broadway theater. He is visible using the virtual spectrum of social media by following him on Twitter @obaer and/or Facebook https://www.facebook.com/obaer3 Much of his work can be found at http://tentacularity.wordpress.com