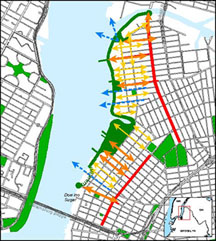 Standing at the ruinous Williamsburg-Greenpoint waterfront it’s hard to imagine that the area is at the brink of one of the biggest redevelopment plans in New York City history. Yet the details of this plan are far from the early stages. In fact, the ultimate decisions are approaching quickly. At a late October meeting in the cavernous Krakus Luncheon Hall of the Slavic Center on Java Street, the sometimes mind-numbing details of this gargantuan vision were presented by the Department of City Planning. But a raucous standing-room only crowd voiced harsh criticism and the North Brooklyn Alliance, an umbrella for myriad community groups in the Williamsburg-Greenpoint area, presented alternatives that would provide more open space, more affordable housing, and efforts to preserve the “artistic” engines of the local economy.

The diverse crowd of Polish, Latino, Hasidic, artist, and hipster residents at first sat calmly as the genial folks from City Planning (DCP) presented what at first seemed like a dreamy scenario. There would be new parks by the water, a continuous two-mile long, 40-foot wide boardwalk along the shore, and public access from all streets to the East River. The audience stayed relatively calm during the DCP’s PowerPoint presentation, which⎯in copious detail and cryptic zoning language⎯promised both lots of green space as well as to maintain the “scale and character” of the neighborhood. However, that calm broke quickly when the first graphic of the proposed waterside towers was presented. Suddenly, it became clear that much of the waterfront may be dominated by Battery Park-style luxury residential towers that could reach up to 40 stories, surrounded by bulky parking garages.

Planning Commissioner Amanda Burden politely responded to the outburst by citing a standard defense for contemporary NYC development: the only way the waterfront esplanade will be built and maintained is if developers are given height on the waterfront for luxury units. A coordinated outcry ensued over guarantees for affordable housing, which is the major issue in the redevelopment of the area. Deputy Commissioner Shaun Donovan quickly noted that the DCP proposal had already been changed because of increased concerns about the issue of affordability and the creation of permanent affordable units. Donovan, who has Kennedy-like hair, assured the crowd that he had no venal objective and that he was trying to get the best for the community “within reason.”

The DCP plan calls for the creation of at least 10% affordable units within the waterside tower developments (the units, according to the DCP graphic, seem to be on the street-side near the parking garages, far from any water view). And there are additional “incentives” in order to get developers to include more affordable units by allowing them to build the towers higher. The city’s proposal includes an “inclusionary housing bonus” that would allow towers to go 8-10 stories higher if the developers create between 15-25% affordable units in the square space of the whole building. According to Donovan, the developers like this idea. Upon further criticism of this additional height, Donovan made it clear that even if the City created a mandatory requirement for 100% affordable housing there would be no route to enforcing this, or any affordable housing, on private land. He added that on some of the city-owned plots in the area affordable housing is “guaranteed”⎯at least in 60-70% of the units; one critic from the audience reminded Donovan that the number used to be 100%.

Various members of the North Brooklyn Alliance gave their own PowerPoint presentations that took issue with many of the details of the DCP plan. Adam Perlmutter, a fixture from anti-power plant meetings, talked about the consequences of the rezoning on the artisan spaces and uses that are a unique part of the community. He warned that if not preserved, the area could turn into a version of Soho or TriBeCa. Perlmutter maintained that many of the new residential developments should be required to have small manufacturing spaces on their first floors. Members of the Alliance’s parks committee also reminded the crowd that the waterfront park, the seductive swath of green in the city’s PowerPoint presentation, is not actually guaranteed, even though the Williamsburg-Greenpoint area has much less than the average ratio of population to open space in the whole city.

Near the end of the evening one thing seemed to be clear: there will be some kind of luxury unit towers on the waterfront if the DCP plan goes through. The reigning ethos in the Republican-dominated NYC politics of the last decade is that developers (and corporations) need “incentives.” But the proposed Williamsburg-Greenpoint redevelopment may provide an unprecedented opportunity for the community to make demands. Housing of all kinds, including the luxury type that developers salivate over building, is in such demand in the super-heated NYC housing market that the community does have power. Giving back to the community⎯more than in just lip service but in the idea of recapturing some of the profits of developers for the betterment of the neighborhood⎯is a real possibility. In the face of the financial windfall developers predict, the strong, diverse community of Williamsburg-Greenpoint may be able to demand genuine local improvements.

On November 16th there will be a Special Public Hearing on the Rezoning at 6:30 PM (Harry Van Arsdale High School, 257 N. 6th Street).

On December 6th there will be a meeting of Community Board #1 for an important vote on the city’s rezoning proposal (6:30 PM, Swinging Sixties Senior Citizen Center, 211 Ainslee Street).

Finding Manijeh felt like putting yet another piece of the puzzle of my fragmented past into place. In fact, we had just started—separately and unaware of one another’s journeys—to reckon with our parents’ revolutionary pasts. More precisely, it was revolutionary affects, the core of Manijeh's book This Flame Within, which brought us back together.

I happen to like the line drawings of very small children, better, in fact, than the work of anyone except masters. The closest thing to it, when children use pencils (colored or not), is the quill strokes of Rembrandt, the more spontaneous and less “spelled out” drawings by Picasso for Guernica, and a few stick drawings on paper by Pollock.