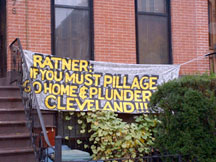 A potentially affected resident’s suggestion as to where Mr. Ratner should develop. Photos by Brian J. Carreira.

In late October, Forest City Ratner mailed Brooklyn residents another of its glossy brochures intended to answer “Frequently asked questions about the Brooklyn Nets and Atlantic Yards.” Within it are the standard best-case scenarios regarding both the jobs potentially created by the project as well as its overall funding. In the spirit of linguistic deceptions such as “collateral damage” and “no child left behind,” Forest City describes the seizure of area homes and businesses for decade-long construction of a blockbusting arena, office towers, and high-rise condominiums as “minimal displacement.” At the same time, residents are also informed that Forest City Ratner will enter into a Community Benefits Agreement, or CBA, to ensure equity in the surrounding neighborhoods. It is this agreement that has critics of the Atlantic Yards crying foul.

Participating in the negotiations for the agreement are Community Boards 2, 6, and 8, and local advocates for the project including Brooklyn United for Innovative Local Development (BUILD), ACORN, and the Downtown Brooklyn Advisory and Oversight Committee. Conspicuously excluded are organizations that have come out against the arena, such as the Prospect Heights Action Coalition and Develop Don’t Destroy Brooklyn. Despite these groups’ prominence as critics of the arena proposal, they are not being given a voice in this pact being made supposedly between community and developer. The groups presently involved have endorsed the Atlantic Yards proposal with varying degrees of enthusiasm all along. Breaking with the opposition, Reverend Herbert Daughtry recently resigned as head of another group, the Downtown Brooklyn Leadership Coalition, in order to join Ratner’s CBA fold.

Specifics relating to terms of the agreement are few and far between. Its intention is to bind Forest City to certain standards that would ensure that Brooklyn Atlantic Yards would benefit Prospect Heights and the surrounding areas. At an October 26 BUILD meeting, Darryl Greene, a consultant for Forest City, laid out some of the points to expect. Up to 50% of the residential units erected would be conditionally set aside as affordable housing. There is also discussion of hiring floors to ensure minority contractor participation in the construction. And there is talk of job training and graduated lease structures that would allow new businesses to pay less rent in the first few months.

Develop Don’t Destroy’s Robert Puca characterizes the CBA discussions as a “dinner party where everyone at the table agrees with the host.” Even within the community boards, some members find communication between designated representatives to the CBA and the board members as a whole severely lacking. As Bill Batson, a member of Community Board 8, recently told a full meeting of that board, “I don’t know about the entire project, but I’ll tell you this, the process stinks.”

Of course, this exclusion could be due to Forest City Ratner’s continuing refusal to even acknowledge that there is substantial opposition to this project. At the BUILD meeting, Greene characterized the opposition as “diminishing.” But such a position is simply part of Forest City’s strategy, which is to marginalize Atlantic Yards’ critics as it tries to create a veneer of community support.

This past summer, the Pratt Institute Center for Community and Environmental Development (PICCED), in conjunction with another neighborhood advocacy group, the Prospect Heights Neighborhood Development Council (PHNDC), conducted a survey of Prospect Heights residents about the project. In late October, PICCED published the results. Corresponding with the parade of meetings, rallies, and discussions where residents turned out in force to voice disagreements with the arena, the survey demonstrates strong concern within the community. Of those surveyed, 82% were either very concerned or concerned about Forest City’s proposal. Traffic, the ultimate cost to taxpayers, and the impact of ten-year construction on the neighborhood topped the list of residents’ concerns with Atlantic Yards.

BRIAN CARREIRA is a writer living in Prospect Lefferts Gardens. You can follow him on Twitter @BrianCarreira.

Innu people have always been involved in fighting to protect the land, and this project was a way for me to showcase the beauty the land has.