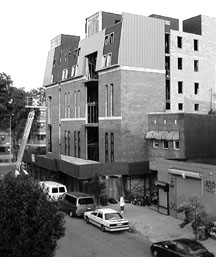 I admit it. I am a gentrifier. Not an occupier or a colonizer but a gentrifier. It’s a label I cannot deny. Allow me to explain: I moved to Brooklyn in the mid-nineties because I couldn’t afford Manhattan though I wanted to romance New York. Since then the influx of people like myself never ceased, making Bedford Avenue like an airport; a gateway to New York for post-collegiates from all over, domestic and international. As with airports, it’s become generic, and so it could be the main thoroughfare in any number of liberal urban centers like Seattle, San Francisco, or Cambridge, Massachusetts. This hip urban atmosphere—a combination of affluence, advanced degrees, earnestness and its twin, irony—creates a vortex of consumerism marking the beginning of the gentrification process.

By the late nineties Williamsburg had arrived as the “it” neighborhood, thanks to the Times, which kept reporting the buzz in its Style Section as did the Utne Reader, calling it the hippest in America. So the sightings of the well-heeled strolling the streets eyeing potential real estate or just enjoying the vibe became more frequent. Before long, more and more bars and real estate offices appeared, popping up like fungus after a heavy rain.

As for me, the rent on my tiny tenement apartment on N. 6th Street rose in three years from $1,100 to $1,400 and it was to continue. These hikes meant that the development company wanted me to leave, knowing that after renovations it could rent the place at top market rate.

Because gentrification describes a process, not just the end result, it’s constantly on the move. Thus, along its course it spat me and others out of Northside’s now very groovy center. Gentrification facilitates real estate cannibalism where new, wealthier tenants consume the older, poorer ones. So the developers and small business owners cater to the tastes and whims of people with more money. And in turn, those of us who have been pushed out to the edge of Williamsburg displace those who are less well off than us.

So I now live beyond the BQE, below Grand Street, in the Southside, where I am riding on another wave of gentrification. This part of Williamsburg in recent history has been predominantly Puerto Rican, and such is the case on my block. More recent arrivals are from Central America: Ecuadorians, Mexicans and Salvadorians. And then there are people like myself, seekers of reasonable rent.

The block where I live is comprised of tenements from the late 1890s, and most are of equal height, the taller at four floors, and similar in style and fabrication with brick or plastic siding. The look of the block is solidly working class, cramped but tidy. These narrow walk-ups were meant to hold the maximum number of occupants; for example, the four-room railroad apartment I share with my boyfriend has two exits, indicating it once housed two families in the typical tenement fashion. Even now multigenerational families share a single apartment. In the next apartment a family of four from Ecuador, two parents and two kids, live under one roof. Below them is another family of six, also from Ecuador, including grandparents, but next to them is a white guy living alone in the same space.

Because of overcrowding, the sidewalk on my block is used as an extension of living space, unlike the Northside where it becomes impromptu flea markets and shabby-chic runways. Here boom boxes, barbecues, birthday parties and even televisions sets make their way to the sidewalk. Being a newcomer and having no familial tie to the neighborhood, I don’t spend time on the stoop or the sidewalk, and I understand that my presence is not expected. It isn’t that I am not welcome but the privilege is open only to long-time residents. During the day, it belongs to the very young and the old. When school is in session the retirees and the elderly pass the day outside. Otherwise even the street doubles as a playground for the kids: football, baseball, bicycles, roller blades and other inventions are played outdoors. So the Kool Man ice cream truck is permanent fixture on my block, as is the open fire hydrant whenever it’s hot.

Because the neighborhood is overwhelmingly Catholic, the Virgin Mary protects my block from both ends. At one corner is a spray painted Madonna in a mural for someone named Antonio shot dead on the spot at age 22. At the opposite end there is the St. Mary’s of the Immaculate Conception Roman Catholic Church, built in 1853. It’s a brick structure of golden brown, not the best looking church around. Most of its parishioners are Latino, so the services are in Spanish. (During the hottest part of the summer when its windows are open I can hear the entire service.) One hymn I recently heard from my kitchen was sung to the melody of Simon and Garfunkle’s “Sound of Silence,” with a folksy accompaniment of acoustic guitars, drum and tambourine. Next to the church is the St. Mary’s Academy Roman Catholic, a school for girls that now sits vacant.

And adjacent to both is the former convent that’s now a group home for severely mentally handicapped adults. Originally, a brightly colored mosaic of the Virgin guarded the entrance, but now most of the tiles have fallen off. And underneath it an inscription announced it as a convent, but it’s been hastily filled in and nothing else indicates its present use. That use came to me one day when I finally connected the various clues. First, there is the special bus—it resembles the sort of bus used to transport inmates, with metal mesh instead of glass for windows—that comes morning and afternoon. Then there are the industrial-sized food containers in the trash, and the eerie screams sometimes heard early mornings. And if I step out on my fire escape, I can just make out the goings-on inside. A woman is seen endlessly folding towels, making beds and talking at someone in the tone of an adult reprimanding someone else’s kid.

Just across the street from these hidden lives, something dramatic is underway: a building boom. Unlike Fort Greene with existing brownstones, in my neighborhood the site of intense gentrification has been the vacant lots. Formerly private parking lots and seemingly abandoned land, they have been transformed in the span of months, into multi-storey, multi-occupancy loft-style residential apartment buildings. They all share a minimalist aesthetic, which I doubt was intentional on the part of the developers and the architects. It could be called the “no time, and no space to waste” school of architecture.

And in a way these structures are the new middle-class tenements. The boxy constructions maximize all the available space to create a “loft-like” interior.

One such building, the first of three on my block, is made of dark gray cinder blocks, and with four stories of high-ceilinged lofts it is the tallest building on the block, though this may change. The 14-unit building is gated with an indoor garage, and each unit has a spacious balcony overlooking the street. Even before I realized it was finished, the new tenants were hanging out on their balconies.

A composite of the typical new renter would be someone under thirty, white and middle-class, who spend their days in Manhattan; in other words, trucker cap-wearing hipsters. It’s true, I feel impinged upon. It’s because once again my immediate neighborhood is changing before my eyes. It’s not just the hipsters that piss me off; it’s also the developers building these monstrosities on every parcel of available land. They do not consider how new projects affect the quality of life for existing residents. For them each piece of property exists on its own allowing them to do as they please, even if the new project dwarfs the next building and blocks all its sunlight. Buildings get built, no matter how incongruous or displeasing it may be to the established residents, and, of course, incessant construction means noise and dust, and there are no warnings when another project starts.

On the next block over, there are two such large buildings, both constructed during the last couple of years. The smaller of the two sits on the corner and is fortress like with a courtyard protected by razor wire-topped aluminum walls and elaborate metal fencing with locked gates around the premises. Undoubtedly the reason for all this security is because of the public housing complex on the other side of the street. These are three-story sprawling 1950s constructions. The two U-shaped structures, each with 48 units total, turn away from the avenue and face each other forming an interior cement courtyard, shielding its residents away from the streets. But then the new kids on the block stay off the street anyway, behind their walled-in gardens and their private roof decks high above the streets.

Last summer we met one of the old timers, a young Puerto Rican guy born and raised in the neighborhood. The day we met him, X, short for Xavier, had been released from prison (for possession of guns and drugs) just that morning. He came out of his mother’s apartment building, the last of the tenements on that block, holding a smoking blunt. Although he was only 22, he was missing most of his front teeth and looked much older. We could tell he desperately wanted to stay out of jail, and he hinted that he wanted friends like us to keep him out of trouble. He also told us that he was functionally illiterate and didn’t even have his GED.

All of it shocked me into silence. Afterwards I wish I had volunteered to teach him to read and write. Wasn’t this my responsibility? I think it was his authenticity that scared me. I’ve thought about it since and am disappointed with myself because I had, and still hold, certain convictions, but that was as far as it went. When confronted with an opportunity to act upon certain ideals, I failed.

It then occurred to me that that is what it means to be a gentrifier. It means that my presence as a consumer starts a series of chain of events that ultimately changes my surroundings, but as an individual I make no direct change, for better or worse, to the neighborhood of which I am a part. It’s as if I have forfeited direct contact with my environment—instead, the way I spend my money has more of a voice than I do. That’s what’s become of me as a gentrifier. I am just one of those new kids on the block.

Louis Block speaks with artist Rachel Eulena Williams about memory and transformation in her two solo shows, and finding order within disorder.

Louis Block speaks with artist Hilary Harnischfeger about materials and process, geology, science fiction, and the influence of the landscape.

Baltimore-based painter Jo Smail speaks with Louis Block on the occasion of her retrospective at the Baltimore Museum of Art, reflecting on her career in South Africa and the US, recovering from a stroke, painting emptiness, and the influence of Clarice Lispector.