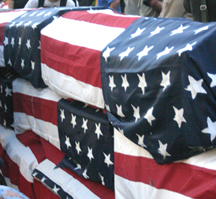 In the aftermath of Republican National Convention, civil rights groups blasted the NYPD for detaining protesters at Pier 57, and for good reason: they extended the mandatory 24-hour processing time, held pregnant women and injured detainees without medical care, and exposed those unfortunate enough to be held to numerous health hazards. But as the lawsuits pile up, Councilmember Margarita Lopez is taking another tack⎯trying to change the system.

She’s drafted legislation, supported by seven other council members, to expand the jurisdiction of the Civilian Complaint Review Board (CCRB), the agency that investigates police misconduct. Though the Board receives more than 5,500 complaints a year, as the current law stands, none of the offenses made at the pier are deemed appropriate for CCRB investigation. This is because the actions of an individual officer are not in question, but instead those of the NYPD as an institution. Calling this obstacle “ridiculous,” Lopez hopes to implement a level of oversight into the “policies and procedures” of the entire NYPD, including its commissioner.

For nearly two months, Lopez’s attempts to determine who picked Pier 57 as a holding facility were stonewalled by the NYPD. But in a breakthrough last month, Lopez released several documents obtained from the Hudson River Park Trust (HRPT), the agency that maintains the facility. Environmental surveys from April and May of this year outlined several dangers at the pier, including the presence of asbestos, lead paint, and faulty wiring. She also obtained a written agreement signed July 28, 2004 from the HRPT acknowledging that the NYPD had inspected the pier and could “exclusively occupy” it from August 2 through September 7.

Lopez says these documents prove the NYPD had prior knowledge of the dangerous conditions and their failure to address them was a violation of the protesters’ civil rights. Furthermore, Lopez says that decision to hold detainees at the facility was made without the sanction of the Departments of Health or Environmental Protection, a significant lapse in judgment. “No one individual is responsible,” she said. “It’s the policies at a higher level that were being put in place.”

Lopez and several of her colleagues asked the CCRB to investigate these charges, but the city’s Corporation Counsel Michael Cardozo has claimed that the “CCRB does not have the authority to review any and all complaints against the Police Department and it’s members.” Cardozo stated that the board holds the power to investigate only those against individual officers, not “institutional or environmental conditions.”

This perspective contradicts what the lawyers bringing claims against the city contend. “The CCRB already has the jurisdiction and authority for review,” said Donna Lieberman, the Executive Director of the NYCLU. Councilmember Lopez and the National Lawyers Guild agree. “We believe the city has a responsibility to provide for people’s safety,” said Yetta Kurland, a member of the National Lawyers Guild, which is organizing a defense of the more than 1,800 people who were arrested. “They should allow the CCRB to have a broad discretionary ability to investigate the issue.”

This thinking aligns itself with the original purpose of the CCRB, which was established in 1986 to provide investigations into police misconduct of any kind. At that time, it was still under the jurisdiction of the NYPD, but in 1993, the city charter was modified to make it an independent oversight agency. It is currently the largest in the country, staffing 120 civilian investigators who look into complaints of excessive force, abuse of authority, discourtesy, and offensive language, and who have had to deal with a 40% rise in the number of complaints over the past four years.

Should the legislation be approved, the CCRB would have the authority to “make findings and recommend action” upon complaints of “unsanitary conditions at police managed facilities, the failure of police to address medical or other health related needs of arrestees and inappropriately excessive detention conditions.” Also included is a stipulation that if the police commissioner himself is the subject of a complaint the CCRB will have the authority to investigate the claim and issue a report directly to the mayor for review. Board members diverge on whether they should have oversight into the top cop, and so far Commissioner Kelly hasn’t publicly stated his opinion.

But employees at the CCRB do say that Lopez’s legislation would grant them authority to look into these larger issues. “We’re the keeper of the record,” said Raymond Patterson, director of communication and mediation for the CCRB. “We investigate complaints and recommend where we think an officer should be disciplined. We can give people an efficient, quick, thorough, and fair investigation into their complaint. We’re not advocates for anyone’s side…but we can guarantee a process, that you will be heard.”

Janelle Nanos is a writer based in Manhattan.

An artist and her friend are helping install an exhibition of experimental works on an abandoned Lower West Side pier. The women involved in the show are working hard, but the artists whose projects are being shown are all men. It’s the early 1970s. Walking home at night through the empty streets of Downtown Manhattan the two friends feel safer making loud noises, singing off-key and generally pretending to be crazy. One night they find themselves improvising bird sounds based on the first name of the organizer of the exhibition. This impromptu performance develops into a sound piece titled Birdcalls where the artist utters the surnames of 28 male artists in a variety of bird-like noises.