a film by Margarethe von Trotta 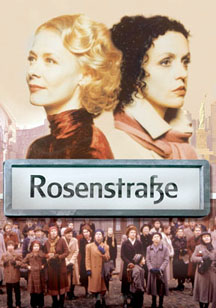 With Rosenstrasse, director and screenwriter Margarethe von Trotta gives cinematic voice to a fascinating and obscure moment in the history of the Holocaust. Unfortunately, the film fails to adequately engage with the critical potential of this history. Rosenstrasse portrays a successful act of resistance to the Nazis posed by a group of ordinary Aryan women married to Jewish men. Desperate to save their husbands, whom the Nazis had incarcerated in defiance of a decree protecting the Jewish spouses of Aryans, these “Jew-loving whores” stood united in daily protest demanding their husbands’ release. Standing in front of the makeshift prison in Berlin’s Rosenstrasse (Rose Street) where their husbands were detained, chanting “give us back our husbands,” these women upheld heroic resistance to the machine guns pointed at them and the careening tanks threatening to kill them. The women of the Rosenstrasse not only managed to prevent their husbands’ deportation to the camps but also achieved their husbands’ liberation.

Von Trotta, however, manages to weigh down the narrative of this extraordinary historical episode with her clumsy direction and heavy-handed female hagiography. Attempting presumably to bring the past into a dialogue with the present, von Trotta presents the 1943 Rosenstrasse episode in a flashback. The flashback is facilitated by Hannah, the daughter of nonreligious Jews living in present-day New York City. While the film’s glossy shots of the Empire State Building and Berlin’s post-Wall Potsdamer Platz glass skyscrapers make for good cinematography, these temporal and geographical shifts from the main Rosenstrasse narrative appear to be nothing more than a flat-footed display of cinematic ostentation that only muddles the plot.

Von Trotta, an eminent director of the new German cinema and one of the foremost feminist filmmakers today, is not new to taking up historical themes in her filmmaking. Yet the essentialist brand of feminism she injects in her films and her commitment to portraying her female characters as unimpeachable heroines is not prone to offering accurate and nuanced portrayals of history. This seems to be the case for Rosenstrasse as well. Here, too, her feminism proves occlusive to deep historical inquiry into the heterogeneity of German society. She misses a number of valuable opportunities to unpack some of the ways in which the Rosenstrasse episode can bring new light to bear on the ongoing victim-perpetrator conversation. Lena’s family represents a wellspring for exploring such historical complexity. Of aristocratic origins and the daughter of a Nazi sympathizer, she is estranged from her father for her marriage to a Jew. Lena’s father, an inveterate Nazi with high-powered connections, refuses to intervene on his son-in-law’s behalf. Lena’s brother, who is supportive of his sister, offers a case in point of how Germans were not only perpetrators but victims as well. A buoyant character and dapper consumer of Weimar mass entertainment, he is seen returning from the ravages of Stalingrad as a wounded soldier.

This invokes an important historical question about German victimhood that emerged in the late nineties with the work of both Nobel laureate Gunter Grass and the best-selling, award-winning author W.G. Sebald: that of German suffering. Approaching a topic that had been taboo for over half a century, writers and political figures in Germany began to argue that the time had come to bring all sides of the story into public discourse. Germans were not just perpetrators; many were also innocent casualties of the Allied bombing campaign. The expellees from the former German territories and settlements in Poland and Czechoslovakia, as well as the victims of Stalin’s brutal crimes, were also presented as part of this discourse. Yet, despite its entrée into public discourse, the talk of German victims has met with a good deal of resistance among historians and critics alike. The main risk in considering Germans as victims is the danger of relativizing the suffering of the victims and survivors of the Holocaust. Von Trotta’s film does nothing to add texture to these Manichaean views on the Holocaust.

Rather than engaging with these historical complexities in any meaningful way, the film degenerates into a maudlin display of intergenerational female bonding that gives vent to unsavory stereotypes: Jewish men are gentle and loyal; Aryan men, in stark contrast to their female counterparts, are cowardly and cannot be trusted. Nevertheless, the film is eminently worth seeing. It treats an important historical episode that foregrounds a moment of female resistance to Nazism. At the same time, it indirectly raises the important historical question of what more widespread acts of resistance during this most ghastly chapter of European history might have been achieved.

Elena Mancini is completing her graduate work in German studies at Rutgers University.