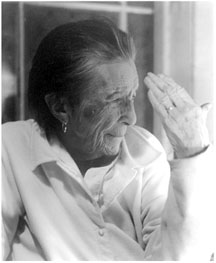 To enter the home and studio space of le grand dame Louise Bourgeois is to enter Pere Jules’s dark and claustrophobic cabin, filled with a multitude of personal objects in Jean Vigo’s final masterpiece L’Atalante. Similar to Juliette’s initial reaction to the skipper’s private domain, one feels ill at ease at first, though eventually, once the guided tour with the artist begins, the polymorphous protagonist Bourgeois, with her charismatic and theatrical presence, is able to keep the audience amused and amazed at the same time.

Unlike Henri-Georges Clouzot’s elaborate staging of Les Mysteres de Picasso, with its dramatic lighting and the artist posturing bare-chested, Brigitte Cornand, who is a well-known filmmaker and a product of avant-garde cinema, made her low budget film (in French with English subtitles. Her other films on the artist series include Christian Boltanski, Annette Messanger, Richard Serra and KiKi Smith) in a diaristic style that captures the casual, every day routine of one of the great artists of the post-war era.

A powerful and emblematic personality, the then 91-year-old artist who is 91 in the film (she will be 93 this December) begins her reveries with a detailed commentary on an old tapestry—the family business specialized in repairing and reselling 17th and 18th century tapestries. In one sequence, Bourgeois reenacts her father’s anger at the dinner table, smashing dishes on the floor. In another, while showing off her metronome (an instrument identified with her well known insomnia), she becomes transfixed and hypnotized by the sound, as if for a good few minutes the elderly artist was transported back in time when she was a little girl fascinated by her most beloved object.

“I love to prove and explain things,” Bourgeois exclaims. This perhaps is what makes her work so compulsive and narratively driven, yet rich with personal content. Even for most of us who’ve been following her work since the great exhibit at Max Hutchinson's gallery in 1980 onward, we’re still constantly astounded by Bourgeois’s directness of expression and her access to her highly personal storehouse of imagery: the house, the tree, the spider, the figure, and other quasi-abstract motifs in various interchangeable transformations. For example, in two drawings of the monumental mother figures who stand frontally, oblivious of the young child clinging to her left foot, starved for attention. In a rare moment of spontaneity, Bourgeois adds milk dripping from the mother’s exposed breast onto the floor to one drawing, and in the other, she depicts an almost identical version, except that the figure is clothed and her head had been cropped above her wide opened mouth. “There are examples of bad mothers,” Bourgeois concludes. 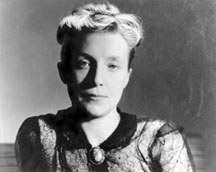 The additional comments by her close friends, Robert Storr and Paulo Herkenholf, the two curators and art critics, and Jerry Gorovoy, the long time devoted confidant and assistant, were all revelatory. Storr explores the complex nature of her obsession with childhood memories that continues to haunt her and feed into her art with various interchanges of opposite themes: male and female, children and adults, violence and tenderness, exposed and revealed, beauty and the grotesque. Herkenholf, on the other hand, sees Ms. Bourgeois as an embodiment of French culture in New York, while Gorovoy reassesses the artist coming to terms with old age. In recent years, Bourgeois has become more peaceful with herself, and more demonstrative both in her recent work as well as in her relationship with her family and friends.

As the artist intermittently sings French songs from her youth, one catches here and there glimpses of her girlishness and childlike enthusiasm. In some ways, Bourgeois’s other great contribution is her Sunday salon, in which she invites young artists to show and discuss their work. “It is important to bring out the potentials in young people,” she says with her thick French accent. The film ends with old footage of the artist smiling in the bright light. Apart from being an indispensable document of the artist, the film as a whole has a wonderful flow and personal quality. One comes away with greater appreciation of Bourgeois—in her case, the person is inseparable from the art.

Louise Bourgeois, who has gained a rather late but permanent status and popularity internationally since her retrospective at MoMA in 1982, is still vigorously at work. Her latest output can be seen at both Peter Blum and Cheim & Reid galleries. This time the venerable Bourgeois turns her attention to solving problems of a new formal and pragmatic issues, while reinventing her own pictorial language afresh especially in the recent works on paper.

Louise Lawler: LIGHTS OFF, AFTER HOURS, IN THE DARK

An homage, a funerary march, a quiet celebration: Louise Lawler’s final exhibition at Metro Pictures, which will permanently shutter its doors in the coming months, resounds with a distinct nostalgia.