Realing It So Fake

“Realism is not realistic, it’s just another stylistic choice.”

It’s also surprising, because Breillat’s obsessions usually contain real entertainment value. In bizarre contrast to Anatomy, which is brand new, also in theatres now is her 2002 film Sex Is Comedy. Sex is Breillat’s backstage film, a study of a woman director fighting to get two actors who loathe one another (and the director) to convincingly feign screwing on camera. In style it’s the anodyne of Anatomy; the exteriors (there are maybe three exteriors in Anatomy) are shot in self-consciously pretty and grandiose framing, with everyone standing in relief against the slow, rolling breakers of the wintry French coast. The interiors revert to Breillat’s more characteristic attempts at realism, with antipoetic compositions and long single-shot takes of characters engaged in conversation.

Here the dialogue is convincingly real, even if the film seems curiously slight and bourgeois in its concerns. There’s a running joke about the manufacture of a fake cock for the actor to wear in his love scenes, and he keeps asking the prop man to use the biggest. And in the end the seemingly warring factions of the set are revealed as one united family, all striving for the same goal. This is not exactly news, as far as backstage stories go.

What makes the film compelling, when it is, is Breillat’s cunningly self-aggrandizing portrait of herself as compulsive, wily, hysterical, unreasonable, confused, and exploitative. She’ll do anything to evoke the emotion she wants on screen, even if the way she goes about getting it produces the opposite of what she’s after (ah, how like romance itself, n’est-ce pas?). Filmmaking is depicted as an unending battle between the outreaching self-obsession of the director and the inward-looking self-infatuation/loathing of the actor. Breillat’s command of the tiny moments and her willingness to let the actors underplay to reveal character (the impassive reliability of the cinematographer is one of the most accurate portraits of that archetype you will see) suggest that she’s capable of drawing a cow that looks like a cow; that she can create a drama of credible character and action. In the end, Sex is amusing, and while that’s damning with faint praise, Breillat’s alter-ego Annie Parillaud (Le Femme Nikita) proves sufficiently layered to keep us engaged.

Which makes the gulf between Sex and Hell all the more puzzling. Breillat’s joyless, detailed rutting seems intended to simultaneously compel and distance (never mind amuse). And in that it is reminiscent of the films of Neil LaBute (In the Company of Men, Friends & Neighbors). LaBute’s preachy, downbeat focus—which, similar to that in Anatomy, is presented as a hyperrealist look at How We Really Are—on the destructive outcome of desire has always seemed a stealth proselytizing for the abstinence of his Mormon faith. Could Breillat have found religion?

If so, the only deity she’s worshipping is Self. Setting the tone of pretentious high-mindedness right from the beginning, a card under the opening title tells us that a body double was used for the intimate scenes, thus making the film “a true piece of fiction.” And here Anatomy again diverges from porn, because the edits from the whole actress to the penetration shots of the body double are laughably obvious. Since the stated raison d’etre of the film is the female character’s commitment to her personal degradation, Breillat’s clumsy direction/editing grindingly undermines her own thesis—and bores us in the process. The former is, of course, a harsh toke for any artist. But the latter is unforgivable. 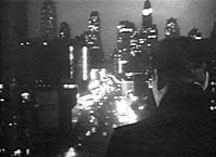 Film still of The Sweet Smell of Success.

In a Lonely Place

“Life is in color, but black and white is more realistic.” —Samuel Fuller

Film noir, though discovered and named by the French, remains, along with jazz and the western, a purely American invention. And, like westerns, noir demands to be seen on the big screen. Westerns are expansive epics of men moving through vast physical space; noirs are constrained epics of men moving through vast—if claustrophobic and even interior—moral space. Epics require grand presentation: Shrink the context and the ideas fueling the journey shrink in kind.

Paul Schrader, writing on noir long before he became a director, maintained that film noir was the only film genre to make its moral and philosophical points through the film’s style—that in noir, style is content. Watching various noir “heroes” scuttling from one low place to the next, the small comfort to be derived from their pathetically recognizable rendition of our vanity, cowardice, greed, homicidal impulse, sexual repression, sexual obsession, appetite for perversion, aversion to the truth, inappropriate horniness, ready recourse to violence, refusal to admit a wrong, romance with the futile, and infatuation with their own psychosis can be amplified by savoring these base self-portraits around the reassuring communal fire of a crowded movie theater. Watch those same struggles at home, scaled down, and the petty crooks and deviant strivers might seem a little too familiar. Or the universality of their torments might be lost…

In the November 4 New York Review of Books, Michael Wood quotes from British film critic Colin McCabe’s new book on Jean-Luc Godard. McCabe presciently writes: “If video had enabled Godard to see cinema anew, it had assassinated cinematheques.” The cinematheque has been thoroughly assassinated in New York City. There are no more repertory houses, and the reflexive expectation that you could experience daily the history of cinema projected in its proper scale belongs to as bygone an era as, say, Beatniks. The trade-off is that it’s easy to rent classic American noir on video. But noir’s essence—its soul—is the daring expressionism of its black and white cinematography, its use of the frame’s edge and of compositional elements as a metaphor for entrapping fate, and its stature as the most imaginatively photographed subculture in cinema history.

So it’s a blessing that the Film Forum is presenting “Essential Noir” from November 26 through Christmas. All films will be projected in 35 mm, as they should be. In the glistening black and white of the work of cinematographers James Wong Howe (Sweet Smell of Success), George Barnes (Force of Evil), Ernest Lazlo (Kiss Me Deadly), Franz Planer (Criss Cross), and Harold Rosson (The Asphalt Jungle), folks much like you and me—only wearing hats and seemingly living in perpetual shadow—manage to get in their own way in more ways and more lethally than you can imagine, I hope. As in the immortal words of author Robert Stone, “it’s great to see a real loser really lose.” And that’s noir: First we meet the loser, then we watch him lose.

The Film Forum’s idea of essential noir is straightforward and canonical; it excludes the grueling Freudian nightmares of Anthony Mann or the later-career Jungian heartbreaks of Nicholas Ray. But those omissions are offset by a devastating night of Fritz Lang: a double feature showcasing the relatively innocent yet perverse (a classic noir formulation) Woman in the Window and the pathological mercilessness of The Big Heat. For unregenerate cruelty to his characters, Lang is on a par with Nabokov or Evelyn Waugh. He offers no more pity than fate itself, which Lang always conceived as self-inflicted.

Another brutal, irresistible evening is a double feature of Stanley Kubrick’s The Killing and John Huston’s The Asphalt Jungle, which features a startlingly young and unscarred Marilyn Monroe. Both these caper films showcase a reverse Horatio Alger-ism, insisting that the best efforts of the purest souls in society will be vested in criminality and that it’s the nature of America to ensure that the sincere striving of the dedicated independent will end in failure. Kubrick’s effort is more self-consciously pulp, and has dated accordingly—though nothing can date the force of even the briefest appearance of Timothy Carey as a psycho killer for hire. Huston’s work (Asphalt and The Maltese Falcon), seems more timeless with each viewing. Huston’s framing is meticulous and improvisational at the same time. His noir compositions are the most dramatically lit of his career, and he uses the vanishing point to emphasize just whose ass is on the line at any moment, or is about to be. Like Lang, Huston edits to mimic the course/speed of inescapable destiny. His cuts tick like a metronome, and you can hear the bad news coming like a locomotive way off down the tracks.

With so many canonical films to choose from, here are ten truly essential noirs (assuming you’ve seen the oft-screened 35 mm versions of Touch of Evil and The Maltese Falcon). These ten* offer the most metaphorical depth, benefit most from the big screen, thematically best represent noir, and are so perverse/unhinged as to form a canon of their own.

1. Night and the City

10. The Lady From Shanghai

David N. Meyer is the author of A Girl and a Gun: The Complete Guide to Film Noir on Video (Avon Books).

*The editor of the Rail says that he’s “shocked” that Double Indemnity is absent from my list. I say that no film with that My Three Sons doofus Fred MacMurray will make my top ten. He lacks darkness.

David N. Meyer would rather have his country die for him.

Darkness Manifest, Onstage and Off

The Joyce Theater remounted Molissa Fenley’s landmark solo, State of Darkness to Stravinsky’s The Rite of Spring. Fenley and Joyce Executive Director, Linda Shelton, spoke with Susan Yung about the origins of the piece and staging the demanding choreography in the pandemic.

In the exhibition Jeanne Silverthorne: From Darkness the top floor of the Marc Straus gallery is dominated by a singular object: Untitled (Chandelier) (1994), cast in resin.

Berwick-upon-Tweed is a visual heaven. Nestled down the railway from Edinburgh on the coast of Northumbria, this border town has changed allegiances between Scotland and England many times.