Jane Comfort and Company at the Joyce Theater 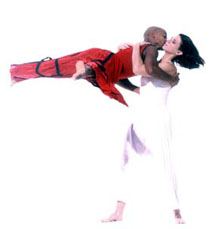 Jane Comfort and Company’s PERSEPHONE; Cynthia Bueschel Svigals as Persephone (in white) and Olase Freeman as Hades (in red). Photo by Arthur Elgort.

I don’t like dance theater—the superficial melodrama that is steeped in pretension, the forceful cramming of music, theater, dance, and text into one piece that doesn’t allow any one element to have any true artistic weight. It’s all too much of nothing for me. But after watching Jane Comfort and Company celebrate its first full-week season at the Joyce Theater in October, I think I’ve changed my mind. There was no eye rolling, no scoffing, no wading in the too-common shallow waters of performance art. There was only a sinuously seamless blend of narrative, movement, set, and song.

The night inaugurated the New York premiere of Persephone, which proved to be a courageous attempt at adaptation but still needed a bit more attention. As the Greek myth goes, Hades, the god of the underworld, captures Persephone, the daughter of Zeus and Demeter, to be his queen, but when her mother’s grief-ridden wails can be heard throughout Hades’ land, he allows Persephone to split her time between the two realms. In order to make the distinction clear between the upper world and the underworld, Comfort and set designer Keith Sonnier had to be creative, and they certainly were.

In the upper world, a white marley dance floor glows with the brilliance of innocence as Persephone (Cynthia Bueschel Svigals) and Demeter (Aleta Hayes) perform a tender gestural duet laden with love. Four citizens, clothed in white costumes that seem no less fragile than a tissue, slowly drive to the rhythm of composer Tigger Benford’s Javanese, gamelan-esque musical score, executing simple box steps with the grace of a stallion’s gait. Their clean and angular yet supple movements have their own sweet and playful subtleties, as if embodying the mellifluous sound of a child’s twinkling voice. And then Hades (Olase Freeman) enters. He is dressed in red and walks on his hands. He nears his victim, performing her languorous movements in reverse and with an inimitable potency, then carries her to his domain. Demeter, realizing that her daughter has been captured, produced such a mournful howl that chills streamed down my back. She begins to destroy her upper world, tearing the white tape and marley from the floor to reveal a layer of black underneath. The upper world’s purity and innocence is stripped away to reveal the terrifying blackness of the underworld. It is a brilliant moment. However, the laborious pace of the scene change robbed the staging of the grand effect it could have had.

Once inside Hades’ underworld, the distinctions between the two realms are apparent. Neon and fiber-optic sculptures, reminiscent of rundown motel vacancy signs, hang from the ceiling, flickering. The underworld dwellers tumble in wearing multicolored costumes and caps. They move like lithe frogs and laughing hyenas, with flexed feet, bent knees, and clawed hands, casting their weight onto the floor with a heavy, sexual driving force. Undertones of sinful pleasures emerge. It’s as if this underworld is really a metaphor for sexual freedom. Returning to the upper world (the white marley laid down once again), Persephone realizes she now knows too much. She can never see the upper world or perform the dreamy movements of her companions in the same way again. She has tasted the forbidden fruit of freedom. With Persephone, Comfort has attacked a narrative, a very difficult and uncommon thing to do in modern dance. And although the movement, music, and theatrical staging gave the piece breadth, the storyline seemed too literal. I would have liked to work a little harder.

The second piece on the program, Three Bagatelles for the Righteous, couldn’t have been a greater departure from Greek myth. Originally choreographed in 1996, set to sound bites from Newt Gingrich and featuring dancers portraying Bob Dole and Bill Clinton, Three Bagatelles confronts the broadening gap between what our political leaders rehearse to tell us and what really happens behind closed doors. Revised this year to reflect our current political climate, the piece now features Senator John Kerry (played by a very tense Joseph Ritsch in a conservative suit) and President George Bush (played by a very comical David Neumann in an army uniform). Three handlers—Kerry’s in jackets and ties so reactionary they seemed radical, Bush’s in black hooded capes suggestive of the Grim Reaper (they could be hiding anything in there!)—manipulate each political puppet, showing them how to salute, speak, and act, as their sound bites give the impression of skipping records. Bush attacks Kerry with a giant cross; Kerry retaliates with a bottle of ketchup. The whole spectacle is absurd and hilarious because it gets to the truth. A depressing recognition, yes, but one that churns in the minds of every somewhat attentive American.

The night ended with Underground River, a piece that won Comfort a Bessie Award in 1998. Delving into the mental and physical realities of a comatose young girl, Comfort creates a very poignant and ghostly land of make-believe composed of simple steps and visual artist Basil Twist’s beautiful little oddities. A purple skeleton of an umbrella with tied bits of white cloth transforms into a playful puppet that the dancers manipulate. Four dancers, all in white and in a row, walk across the stage. They hold hands and empty smiles. A chirping bird flutters in the distance; they turn their heads the other way. Chanting Toshi Reagon, Haydn, and traditional folk songs, the dancers twirl their wrists. A muddled voice is heard, as though fighting through a cloud of fog: “Cara? Cara, honey? Can you hear me?” It’s a mother’s pleading voice, followed by a father’s: “Cara, if you can hear us, squeeze your right hand, okay, honey?” The clearer the voices of her parents, the closer she is to a physical reality. The doctor asks her to lift her leg, and the dancers carry each other in awkward positions to different sides of the stage, portraying the difficulties of paralysis. The tone is heavy, milky, and blurred, as though a gauze cloth were encasing the stage, the dancers, and their movements. The air seems a bit too thick. And as we follow Cara through her varying degrees of consciousness, the dancers hum and sing in dulcet voices while white feathers fall from the sky.

Jessica Weiss is a dancer and writer living in New York.

Jessica Weiss is a dancer and writer based in New York.