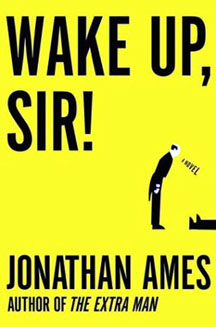 Jonathan Ames is the author of five books, including the recently published novel Wake Up, Sir! He is the winner of a Guggenheim Fellowship for prose fiction, a contributor to Public Radio International’s The Next Big Thing, and lives in Brooklyn. James McCloskey recently spoke with Ames on behalf of the Brooklyn Rail.

James McCloskey (Rail): I guess the question we’ll start with—

Jonathan Ames: Can I hold the tape recorder like this? Maybe I’ll do it like this. I’m just looking out for you, man, because I’ve done interviews where you get this squiggly tape afterwards and it’s really annoying. [laughs]

Rail: [laughs] Okay, sure, thanks very much. First question: Why did you first start writing? What prompted you to first begin?

Ames: Well, like most writers I love to read, and so I’m a book lover. My parents were good to me, but the area where they were really generous to me was books. Everything else was secondhand: secondhand bicycle, secondhand ice skates, secondhand soccer cleats. Which is no big deal, but with books for some reason I was given carte blanche. And when I went to school, we’d fill out these forms and get books every month, and I would get a ton of cartoon books and sports biographies. I was always the kid with the most books, and I loved them when they came. I can almost feel a little serotonin squirting out just remembering the way it felt when I’d get those new books. So, first of all I’m a book lover, and second, my sophomore year in high school I took a creative writing class, and I think the English teacher thought maybe I showed a little flair. And then I sprained my ankle, and I was on the soccer team, so she set me up with a gig covering the soccer team for a local paper, and I had to travel with the team even though I had a sprained ankle. So that was kind of like an opening moment, and I got to publish these soccer articles, and I guess it was thrilling. It would be funny to find those now. I think I probably exaggerated a lot of things.

Ames: Well, neither. I guess as more of kind of a, well, it just happened when I was so young, and maybe when I was young I had a lot of premature ejaculations. I didn’t have the sexual mastery that I have now. Which is also a lie because now, well, I could be more potent, I guess. But, what was I going to say? I compared it to that because when it came out I was really young, I was 25—I sold it when I was 23—and then after that I had a long dry spell. It was very hard for me to get hard again—I mean published again. And it was after that book that I sort of had to learn how to write all over again. I even realized that my grammar was very poor after my first novel, because I taught a composition class a few years later. That revolutionized my writing, teaching a composition class, because I had to study so much grammar. So, it was more that I had to learn to write all over again. I didn’t publish again for nine years. I had that too-much-consciousness that artists talk about after their work is out in the world: suddenly they become very aware that people read their books or respond to them, and this kind of jammed me up. And then I wasn’t sure what to write about either. I needed to live some more, too. So that was good. I lived.

Rail: In your two most recent books, The Extra Man and now Wake Up, Sir! you seem really drawn to this Fitzgeraldian, young gentleman-type character.

Ames: Well, I was in The Extra Man, and then Wake Up, Sir! was kind of a sequel to that. I’m not drawn to that character anymore; I kind of expelled it from myself. But, yeah, I was into it for a while, because in my twenties it was this thing I did, wear sportcoats all the time and try to be the Young Gentleman. It was an identity thing. I had been living in Princeton for a number of years after graduation, so yeah, the whole Fitzgerald, Wodehouse, English gentleman thing was an issue for me. I’m over it. [laughs]

Rail: In The Extra Man there’s a lot of focus on transvestitism, and Alan Blair, the narrator of Wake Up, Sir!, has a latent nose fetish. Do you think most people would benefit from hanging out at a transvestite bar like Sally’s for a couple of nights or exploring some of the fetishes they’ve suppressed?

Ames: Hmmm. Well, if they have a fetish they’re suppressing or ignoring, but it keeps bugging them like a stone in their shoe, it might be good to try to work it out in some ways. I never read him, but there’s this guru/philosopher named Gurdjieff or something. I was driving a taxi many years ago, and this ex-hippie (or still hippie) taxi driver told me that people that came under Gurdjieff’s sway, you know, if it was a woman, dress as a man; if it was a man, dress as a woman, that sort of thing. To try to walk in someone’s shoes. So there’s something to be said for exploring things and what you might learn. I know for me, I’ve kind of explored some repressed things, and you get them out of your system and you get over them. Other people explore them, and then they’re stuck for life having to subscribe to foot-fetish journals or something, and that’s a hassle. So I try to let this stuff go, you know? Fetishes can put you in a corner. I have a few friends with fetishes, and some of them with the serious fetishes seem to get by all right, but it’s kind of like psychological herpes because it limits you.

Rail: As I was reading Wake Up, Sir! I thought it seemed like such a fun book to write. Did you have a good time writing it?

Ames: I think it became fun, but for a long time it was very slow. I don’t like to compare myself, but I read in some interview that Jonathan Franzen worked on The Corrections for a number of years and then wrote most of it in an eight-month period, and that’s like the experience I had with Wake Up, Sir! I started it in September of 2000 and finished it in November of 2003. So that’s a three-year period. But there were long stretches when I wasn’t working on it or was just stuck on the same chapter and couldn’t seem to move the story along. But then last summer, finally, maybe because I knew there were certain deadlines I was missing for the book to come out in 2004, somehow I just focused, and once I sat down and just committed myself to it, the book started to fly. And that was fun. It was fun to write these loony passages. But then I had to rein it in, make sure I didn’t go too far or get too jokey. But I did have a good couple of months. I don’t know that writing is ever fun, though, because what you see on the page has been gone through and cleaned up.

Rail: Just to do it you have to isolate yourself a lot.

Ames: Right, and even then it doesn’t come out perfect the first time. It’s like raking leaves or vacuuming—you have to clean out a lot of debris before you get to what the reader sees on the page. But it was not un-pleasurable to write Wake Up, Sir!, even though I don’t know that everything about writing is fun. But it keeps my attention, and I feel useful in those moments. So it’s something I like to do.

Rail: Alan Blair, the narrator of Wake Up, Sir!, has a motto: “Live and don’t learn.” Was there ever a period in your life when you adopted that saying?

Ames: I don’t know that that’s my motto, you know? I think that’s Alan’s, like, ironic motto, or his feeling-self-defeated motto. But I think a lot of people can relate, though, because it’s like, “Damn, I made the same mistake again. Life keeps repeating itself over and over.” We learn by attrition and by being worn down by the same repeated follies. In some ways it is a good motto, because life goes, “Same mistake, same mistake, same mistake, all right, maybe I won’t make it this time.” So, “live and don’t learn,” and then in parentheses “but eventually you do learn.” Or, “eventually you can’t take it anymore” is usually how it happens. You know?

JAMES MCCLOSKEY is an author and co-founder of the Street to Home Initiative.

This month, our editors and writers have selected their favorite art books of 2021, featuring interviews, anthologies, photography, critical writings, and more, from authors and artists such as Gillian Laub, Robert Storr, Sky Hopinka, and Édouard Glissant, among others.