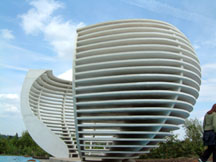 Exemplary of post-structuralist writing that has been published on Rita McBride’s work thus far is Catherine Ingraham’s: “McBride’s well-mannered donkeyism also doubles back now and then in order to remind us of the original maligned donkey of modernism, the one that introduced elements (to the city, to architecture) that refused assimilation; small reminders of the bodies that occupy space, the color yellow perhaps, or the tendency of the whole theatrical assembly to dance because of the looping pattern produced by the modules, or the peculiarity of the oval, or the sandwiched construction technique. These moments/objects produce the dynamism and the cleverness of the installation and also its canny threat, its critique of the institutional white space where it is, and will be, set up, inhabited, dismantled, set up, inhabited, dismantled; the architectural performance that envelops the artistic performance, and vice versa.”

Addressing yellow and “the peculiarity of the oval,” in the main space of the Sculpture Center sits “Arena.” Residing in Maya Lin’s exposed truss/beam mechanics and spacious interior, “Arena” here reads more as blended architecture rather than postmodern critique. It’s quite pleasing to walk laterally through and behind the amphitheater-like construction, stepping over its supports. One becomes a kid, navigating circular eyes, the womb/belly of a friendly yellow dragon with puzzle-like connectors. It/she stares at you, waits to be climbed or sat upon, offering herself for participation in the series of scheduled performances that enliven it/her in situ.

In tandem are McBride’s soft porn novels, which sometimes function as exhibition catalogues. Their anonymous stories are by a variety of writers, including McBride, who considers them “an attempt to breathe some air into the deadening technical language that the art world has adopted from post-structuralism.” A sexy artist named Gina Ashcraft is the protagonist, whose goal is to seduce and be seduced in the midst of her art. This is “Ashcraft’s anti-post-structural take on the yellow dragon: “I want to stage in Luxembourg. I am going to put on the ‘Arena’ again and this time it will act as a cloak for an ideal space of contemplation. On the wall in front of the ‘Arena,’ diametrically opposite the potential spectators, on the other side of the wall, where I won’t be seen, I will screen, at full size, the film I just shot in Lisbon, in a fifth floor brothel. Thus I will be at the same time spectator, the artist, who exhibits, and the object of desire that is displayed, even though this display is prohibited by the very characteristics that the exhibition demands. The ‘Arena’ shows and hides as it shows…it exhibits and rejects its own existence as an object that determines the parameters of desire.”

Placed outside of their normal institutional white spaces, in the Sculpture Center’s exterior courtyard, the minimalist performances of “Awning” (2001), “Servants and Slaves”(2003), and “White Elephant”(1999), shift more towards their Pop personas. I acutely focused on “Skylights”(1998), six aluminum/bonze castings resting atop the gravel. These seem like more industrialized versions of earlier work like “The Fat Man”(1992), a huge plaster/burlap testicle-like sac growing out of a column, blobbing onto the floor, or “Balls” (1991), a similar belly/testicle appendage protruding from the wall. I almost held my breath before these six tiny reliquaries; I imagined and they grew, profoundly. I recalled a cemetery in Poland, whose small graves housed children’s remains from a village stormed by the Nazis. I conjured the emotive images of the swollen bellies of dying infants in Sudan, lying motionless across their mother’s lap, silently crying. These “Skylights” transformed, and their significance as “post-minimal versions of the present politics of sculpture as social signifiers,” as Marcel Krenz termed them, gained new light.

There is more than reactionary, spatial critique in McBride’s more recent “Arena” (2002). Nico Israel claimed that, “with Duchampian verve, McBride strips bare modernism’s ‘bachelor’-hood, even, revealing its complicity with the spatial isolation, regimentation, and domestication of the body—particularly the female body.” Great verve is present here and the female body is thoroughly de-domesticated and humming (permanently) in an English field. Her grand sweep is almost a complete oval, with diagonal cuts slicing her hipbones, allowing entrée. She is white lyricism and mathematical harmony. She has paved a path for the next of her kind, whose name is “Mae West,” “Mae W” I call her.

In the Sculpture Center’s small gallery, there are two works: one, an animated video showing the proposed “Mae West”—an architectural sculpture that McBride will realize in 2006 atop a road ring in Effnerplatz, Munich. Literally playing out Ingraham’s assessment of “Arena’s” dancing nature cited above, the animation of “Mae’s” design twirls and spins, inter-cut with dance film clips—a May Day celebration, pirouetting skirts and a scene from Tati’s Playtime, with cars revolving around a circle with appropriately highlighted “girlie” truck figure. The Munich ring is above an underpass with a tram running through its center, which will go through “Mae W” herself. She will be magnificent: a metal, hourglass corset rising fifteen stories, spreading, hovering, calling.

A brilliant physicist/art philosopher friend said of Robert Longo, upon seeing his drawing show of Freud’s abandoned office post-Nazi takeover, that sometimes artists play an art world game until they’re firmly established and then “they can really get serious.” Ken Johnson once remarked that McBride’s work was more “programmatic than mischievous.” But “Mae W” is coming and we’ll enter her—literally as well as philosophically, as the highly engaged public has proved. I’ll posit that this is McBride’s juncture, where impassioned mischievousness can transcend program. Will “Mae W” be metaphoric armor, a sparring of masculine/feminine iconography? Or might her form be read as archetypal “reticence,” a donning of a restraint necessary in times of extreme appetite, a reining in of the fat man? She belongs in Germany of course, but what devilry to wish that something of her kind could dance upon our shores as well.

"Art is the culmination of a life gone insane."

From 1962 to 1964, Judson Memorial Church hosted a series of performances that challenged the conventions of dance. These “Concerts of Dance,” performed by a group of artists collectively known as Judson Dance Theater, centered on choreography that involved quotidian movements and simple prompts. Incorporating everyday objects and music, these interdisciplinary performances were imbued with a spirit of experimentation and collaboration.

Tales of Hopper: The Additive Adaptation from Painting to Dance