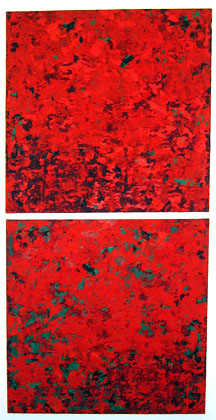 With eyes resting on an old pipe in a small room in a monstrous gallery building on the west side of Chelsea, its painted coating ravaged with cracks and flaking, my mind wandered back into memory. How many times had it been repainted? How many and why specific colors? What had happened since that last fresh coat? Who’d been born, or died? Why did I find myself thinking about the paintings of Rainer Gross?

High Modernism, or at least that variety expounded by Clement Greenberg and his formalist epigones, was a direction in art that sought to eliminate all qualities extraneous to the essence of the medium. This dogma eliminated figurative references, narrative, and any relation to things beyond the edge of the canvas. Eventually, in his lionization of painters like Jules Olitski, and early Morris Louis, Greenberg even began to eliminate line, form, shape, and edge, leaving nothing but color and surface as the ultimate residue of this distillation.

These latest paintings by Rainer Gross reside also in this area of pure surface color. In fact, the whole fabrication process seems like a performance that attempts to make this modernist philosophical paradigm into a messy painterly actuality. Gross smashes the colors into the surfaces in the manner of a monoprint, using a mixture of oil paint and dry pigment spread between two canvases. The resulting pictures bare a Rorschachian mirror image of each other, though with subtle coloristic and compositional differences. In some cases the panels are exhibited together side by side, or one above the other. When I asked Gross about the development of these abstract works from his earlier figurative work he said, “I don’t see them as abstract. They’re real to me. There’s some kind of birthing process that goes into them. About ten years ago I saw the Pollock show at the Modern, and a large retrospective of Rothko. I’d been working with monoprints and started using canvas. I liked the distancing, the organic randomness of nature.” Another unique quality of this process that might be considered a disaster for a conventional painting is esteemed by Gross. This is the crumbly desiccated look of the pictures, almost as if they were ancient walls, brightly painted and stained dozens of times, that have now begun to crack, decay, and flake away, exposing the underlying colors. An ironic statement could be implied about the decrepit state of the Modernist painting tradition, or as Gross commented, “Time is eating away at modernism. We’re now beginning to see that history isn’t linear any more.”

Though the technique has the potential to slip into a merely decorative cliché, Gross has kept it vital through his continued experimentation and a risky color sense that seems to avoid the formulaic. The underlying grid and stripe structures that were the basis for many of the compositions in his last show have dissolved; the lines have become blurred and smudged, flame-like, allowing a graphic sense of space to infuse the works. In “Huron Twins,” (2004) the panels are not only reversed from separation, but flipped top to bottom. A central vertical outcropping of yellow on an off-white ground is contrasted against broad slashes of maroon and cool dark blue; flickers of various greens, grays, and oranges accentuate this.

It’s said that painting is the bastard child of alchemy, and these pictures display the different chemical characteristics of each pigment—which ones hold the medium, which are  grainy and which are smooth, or which ones meld into viscous membranes of paint. “Deura Twins,” (2004) is the largest diptych in the show. Its light gray ground is so dry that it looks like linen textured plaster, weathered by wind, rain, and surf. Creeping stains of red and blue seep down the canvases. The physicality of the pigment only partially coincides with “paint.” The nature of these mineral extracts is apparent.

A small selection of the artist’s monoprints is also presented. These works buttress the paintings and seem like coloristic or compositional rehearsals for the paintings with the exception that they employ a monoprint’s unique properties of textural illusion with great skill. Perhaps modernism is over-ripe, but after a hundred years of the pursuit, one must realize that it will have a long and glorious period of rotting decay, and like stinky cheese, it will be appreciated by certain connoisseurs with discriminating palates.

Zeshan Ahmed and Yasi Alipour: to bleach, to fold

Transmitter gallery in Bushwick, Brooklyn has put together an exhibition of works by artists Yasi Alipour and Zeshan Ahmed curated by Martha Fleming-Ives and Kate Greenberg. Both artists’ works consist of photographic images created without using a camera: Alipour favors cyanotype and inkjet prints while Ahmed uses RBG pigmented C-prints on transparency sheets. Alipour folds paper as one might origami, carving out straight horizontal, vertical, and diagonal lines that unfold geometric forms. Ahmed, on the other hand, erases printed sheets of pigment with bleach, blocking shapes using masking tape. Both artists challenge the flatness of photography and drawing, whether we’re engaging with Alipour’s reliefs of undulating paper or Ahmed’s transparent sheets, hung off the wall in layered curtains that allow light to shine through.