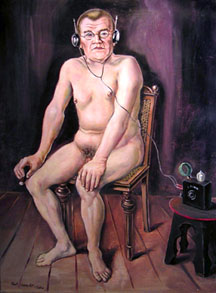 As you enter the first room of the Ubu Gallery, a large oil painting of a naked man listening to radio-headphones dominates the stage in a powerful painting by Kurt Weinhold. It is the opening image of a show that examines one of the most important trends in German art of the twentieth century. Between the years 1919 and 1933, the Weimar Republic was a world leader in art, and Die Neue Sachlichkeit (the New Objectivity) exerted a decisive influence on the development of the arts, turning attention away from the main currents of the avant-garde and to the exploration of new directions. It articulated the cultural ideals of Weimar Germany more closely than Expressionism or the Bauhaus. Focusing sharply on the society of the 1920s, Neue Sachlichkeit offered a somber visual barometer of peculiar economic discrepancies and of the lifestyle of its day. The cultural center of the Weimar Republic was Berlin, but Dresden, Munich, Cologne, and Hanover were also important artistic cities. It was in Berlin that the powerful forces of modernity—political violence and social upheavals—were most acutely experienced, and provided powerful inspiration.

For the artists of Neue Sachlichkeit, their caricatured iconography was an objective representation of the world: the faces of power, military violence, abject poverty, corruption, human decay, prostitution, and decadence. The paintings, photography, drawings, and prints at Ubu, most of them of museum quality, shed some light on the broad spectrum of the group’s realist trends. Well-known artists in the exhibition include George Grosz, Otto Dix, Max Beckman, Hans Bellmer, Karl Völker, Rudolf Schlichter, Rudolf Dischinger, Karl Hubbuch, and Christian Shad. Over forty artists and photographers are displayed salon-style in an exhibit that surprises and provokes the viewer at every turn. Concerned with such universal issues as death, inequality, injustice, and the alienation of city life, these artists were inspired by the modern-primitive styles of Gauguin, van Gogh, Ensor, and Munch. Expressionists evolved in the time of New Objectivity and became much more than artists of a certain style or a movement; they became political and social commentators. “New Objectivity” is a conception of life and a vision of the world seen from the inside: man imposing himself on nature, on events, and on himself. Its art is direct and is driven by a primitive impulse and is ultimately ecstatic—depicting defiance, despair and desire.

The Neue Sachlichkeit artists contemplated the facts and reported objectively and impartially. Grosz drew innumerable prostitutes, their facial expressions giving them an attitude of moral vindication toward their clients. In the watercolor “Brindisi,” the piggish looking faces of power include the capitalist, the officer, and the priest, all sitting in a tavern. This piece belongs to a vital moment in Grosz’s work. As Hans Hess wrote, “Grosz’s sardonic realism had replaced the hectic futuristic simultaneity of the earlier years. An attempt at factual, critical reporting, politically committed yet ‘objective’ in the representation of events, is another aspect of Grosz’s work. This watercolor marks a transition from the mechanical style to a stylized objectivity which was to be developed in some of his oils.”

Verists, such as George Grosz and Otto Dix, sought to activate society by depicting life’s specific intensity through “tearing actual things out from the world of real events,” while Classicists, such as Heinrich Maria Davringhausen, pursued the “timelessly valid object.” In the local press of 1928, George Grosz is pictured in his studio in Berlin in front of the painting “The Agitator,” a reference to Hitler. The accompanying caption mentions that the district attorney of Berlin indicted Grosz for blasphemy and confiscated for the trial several sketches for the theater sets and costumes of The Good Soldier Shweik by Bertold Brecht.

Downstairs at Ubu a triptych by Ernst Fritsch titled “Memories of Eldorado” (1929-1932) has in its central painting a pair of dancing girls embracing and kissing. There are also watercolors by George Grosz depicting a corpse tied-up lying on the ground and two piggish characters commenting on the encroaching insects. A portrait by August Heitmuller of the “Prof. Fr. W. Goshem” dominates one of the walls with its somber realism and dramatic colors.

Neue Sachlichkeit was also a form of political dissent in a time of a savage political and ideological battle in Weimar, a dissent in black and white and no grays; unfortunately it failed and in 1933 the Germans elected Hitler. Most of the artists had to flee, some were killed and their work was burned or presented by the Nazis as so called “Degenerate Art” in a traveling show as the art that infected Arian culture with “Jewish decadence.” After 1933 there was no longer a school, only some surviving outstanding painters. Robbed of all illusions, artists like Grosz and Dix attacked and unmasked those who were responsible for the war and social injustice. The Verists, though they made use of expressionistic draughtsmanship and colors, differed in their views on the ends served by art. Art had to obey their differing practical theories, not an artistic ideal. They were the first to raise the decisive question of committed art. Verism turned to a hard objective realism. A visual treasure trove, Neue Sachlichkeit: New Objectivity in Weimar Germany is an assemblage of some of the world’s great artists of the era as they wrestled with the evil of early fascism.

Commemorating the centenary of the armistice of the First World War, the Tate Modern presents Magic Realism: Art in Weimar Germany 1919 – 1933. Comprised substantially of loans from The George Economou Collection, the show attempts to revive the overlooked artistic term Magic Realism, while also exploring the changing fortunes of the short-lived Weimar Republic.

LIT Council: Men of Color Called to the Stage

The pen, the page, and the journey of the artist's imagination. This October, LIT Council launches its second season as The Tank’s in-house development intensive for new plays. What makes this group stand out? Founded by Akin Salawu and co-created by Beto O’Byrne and Jerome A. Parker, the group is exclusively for male Playwrights of Color.

Misfiring synapses: a conversation with Gabri Christa about her stage comeback with Magdalena

This fall Christa is reconnecting to her roots—both artistic and familial—making her comeback as a stage performer in a cross-media solo, named after her elderly mother, Magdalena.

I recently had the chance to see Dana Diehl and Melissa Goodrich stand side-by-side on a stage and read from their collaboratively written story collection, The Classroom. They tag-teamed their way through “The Boy Who Arrives in a Box,” the book’s first story, taking turns reading the words that they’d composed together, transitioning with grace and trust and happiness. What was on display, I felt, was the special connection that it takes to write a daring book together.