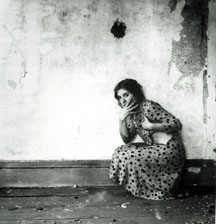 A young woman crouches in a crumbling interior, her dark hair and deeply outlined eyes contrast sharply with her pale skin and a dilapidated white wall. The paint has peeled in an odd shape on the right above her back, while on the left, water stains modulate the blankness. The frame holds only a very shallow space, revealing the paint-splattered and scarred wooden floor of abandonment. She is wearing a polka dotted dress, but the side zipper on the bodice is open and the bottom of her breast peeks out from under the hand that is tucked into her armpit. It is an enigmatic gesture, as is the way she holds her other hand in front of her mouth, fingertips darkened by fixer; a pose struck to create diagonal lines against the parallel horizontals of her knees and the baseboard. Directly above her head is a hole, registering on film as a black circle except for the cracking plaster around it. The photograph has a mysterious melancholy in the combination of the ruin of the space, the illegibility of the signs, and the elusiveness of the subject.

I fell in love with Francesca Woodman’s photographs the first time I saw them in a book as a college student. This was partly because I could identify with them: they are mostly simple black-and-white pictures, printed too dark, full of a romantic youthful beauty that I was searching to capture in my own photography. The allure of Woodman’s work was so strong that I tried to write about it. And as powerfully as I was drawn to look at the work, I was rebuffed by it when I tried to translate her images into words, to explain, critique, or comment.

Part of the difficulty of Woodman’s work is her biography: the child of two artists, she was a photography prodigy, attending RISD, traveling to Rome, moving to New York, making pictures, until she committed suicide in 1981. So these pictures are only “student work,” only the beginning. It is pointless to read the work biographically, although it is tempting, since the melancholy of the images is so palpable that it is hard to resist the urge to say, “these are the photographs of a girl who will commit suicide.”

Since 1986 when Rosalind Krauss and Ann Gabhart organized Woodman’s first posthumous solo show at Hunter, her images have become iconic, reproduced in luxurious monographs as well as on dust jackets for books that have nothing to do with photography. And while her work continues to be exhibited in Europe and the United States, this is the first Woodman show in New York in over ten years, and the first exhibition of her videos here. What is most surprising in viewing the original photographs is that they are generally smaller and darker than the reproductions. Against white gallery walls, they become peepholes into fantastic worlds; like a miniature painting from the Northern Renaissance, Woodman’s images contain immaculate details for totally imaginary scenes. But unlike Renaissance painting or even most contemporary photography with its cinematic aspirations and overtones, there is no plot built in. Instead, Woodman’s photography appears to confound narrative. The photographs are almost absurd, verging on irrational: tree bark wrapped around wrists held out towards the viewer; sand crawling up a leg on the beach, dress whisked away; a nude hidden behind wallpaper fragments in an empty old house; a door propped against a wall in an impossible balance; the soft pale flesh of bodies floating in space.

The assumption of photography as a record of reality makes the camera seem like an unlikely medium for an artist with a propensity towards the fantastic, the impossible. But it is the photographic that makes Woodman’s images poetic. Blurring and cropping, enlarging and miniaturizing: Woodman used all of photography’s tricks out loud. Her photographs are much less factual records or fictional narratives than an ongoing experiment about what photographing something reveals. In the looping group of videos at Marian Goodman, there is a short scene in the corner of an empty apartment with big sunny windows: a young woman walks in wearing a fur coat and boots, she takes off the coat, and naked underneath, sits on a wooden chair and coats herself with a white substance, and then lies down on the floor. As she settles in, there is a flash of light; the room is covered in white, she gets up, the impression of her body is left on the floor and she exclaims, “Oh I’m really pleased!” The strange process of photography is Woodman’s subject, her body simply an available resource for experiments.

Eschewing or eluding truth in favor of mystical revelations in chemistry, the results are images of a self shifting through time and space, articulated in relation to surfaces, to textures, to sensual experience. The space of the images is consistently shallow, and the camera almost always looks straight ahead or slightly down, towards a corner or the floor, producing a spatial intimacy and a reduction of narrative details. The figures and their gestures are also enigmatic; everything but the whimsical details that propel the desire to look has been stripped away.

The most haunting quality of Francesca Woodman’s work is denial. Perhaps that seems like an odd claim for images that also resonate, practically vibrate, with desire. And yet this paradoxical combination is actually not such a strange pairing: in photographs laden with desire, denying the crucial literal information leaves the viewer with a palpable sense of longing, a visceral need for more. As Benjamin Buchloh observes in his insightful essay in the slim, elegantly simple catalogue of the show, Woodman exploits photography’s deficiencies rather than its strengths, or perhaps she turns deficiencies into strengths. “One of the strategies with which Woodman establishes such a proximity [to the Imaginary] is to prove the utter insufficiency of photography’s positivist empiricism which it comes to the articulation of the subject’s existence in desire.” Francesca Woodman reassures us that, in a time when desire seems controlled by photographic images in every conceivable sphere, photography is also capable of exposing sensations and dreams—desires with no material basis.

Sirena’s Gallery chronicle’s the grief and struggles of gallery owner Sirena who is mourning her husband’s death by suicide during the COVID-19 pandemic. We chatted over Zoom this summer about destigmatizing mental health issues, the power structures of who gets to make and curate art, and what it means to connect to your heritage as an adult.

On the occasion of the exhibit Giuseppe Penone at Marian Goodman Gallery in New York, which ran from March 9 to April 17, 2021, Rail Editor-at-Large Francesca Pietropaolo and contributor Alexis Dahan held a conversation with Giuseppe Penone, discussing touch, color, the book as physical object, sculpture, poetry, animism, Man’s relationship to Nature, and much more.