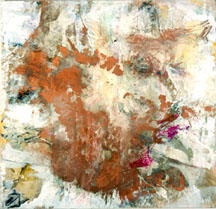 Cora Cohen’s recent paintings explore a theme that never ceases to challenge: the multiple paths within abstraction. A New York native, whose acclaimed oeuvre spans nearly thirty years, Cohen hardly needs to prove herself. Reinterpreting Abstract Expressionist aesthetics from a contemporary point of view, Cohen establishes a sophisticated visual language all her own, which in the most successful cases, radiates with an extraordinary sense of poetic dynamism.

Innovative processes and unusual mixed-media cocktails determine the versatile physicality of the works. Layers of oil, raw pigment, copper, pastel, enamel, and graphite manifest on muslin as fluid drippings, bold gushes, thickly applied strokes, or thin washes. Brought together, they spawn a mélange that juxtaposes free expression and accidental flow with conscious mark-making by hand, brush, spatula, or cloth. To find an organic balance between freedom and control, between the embrace of intuitive improvisation and editorial interference, is one of Cohen’s main concerns.

However complex their history, the content of each painting reads as unified, fully unfolding within the limits of the pictoral frame. In fact, the notion of an underlying structure prevails even in explosive compositions like Another Order of Being (2004), in which extreme movement and saturated color contrasts provoke our visual perception at first sight. Moving from lighter mint washes around the edges towards the accumulation of matte blacks in the center, the abstract imagery takes on the role of a gaping hole, an indefinable void, ready to suck the viewer’s gaze into unknown territory. While utilizing this dramatic discrepancy of shallow and deep space in order to tease our sense of orientation and defy the arrogance that comes with complete certainty, Cohen limits the confusion by counterbalancing the composition with a web made of delicate blue lines. Spreading over the entire surface, this artery-inspired network serves as the viewer’s main point of reference as much as a stabilizing crutch.

Less dense, yet hardly less complex in terms of food for thought, Diasporic Identity (2004) draws attention to color relationships. Signal reds, pinetree greens, soft pinks, and traces of orange pigment enhance the work’s vivacity. Not unlike studying a map, the viewer’s eye seeks out similarly toned fields and instantly travels to the larger of the related color patches. Many of these are surrounded by forceful white and black cross-hatching marks that suggest immediate release. One is reminded of the looseness seen in quick drawings on a charcoal board, which after being repeatedly changed and erased, leave foggy ghost images of line after line over line.

Cohen is at her best when she attempts to create the impression of timed development and tempo. One of the most accomplished works in the exhibition, Heart of Darkness (2004), evokes in us the illusion of witnessing space in motion, transforming itself physically, and more importantly, morphing in stages. With the force of an ocean’s undercurrent, a wide stream of vivid brushstrokes forms a strong semi-circular movement from the lower to the upper left of the canvas. Though the palette assigned to this strong component is nothing but a clear understatement, featuring felt gray-browns, ochre, and muddy mauves, it does not diminish its dominant impact. Even easy eye catchers in the shape of bright green and pastel blue splashes, bordering on the right edge of the painting, barely distract beyond first glimpse and eventually are nothing but small melody lines within the larger symphony: the ultimate embodiment of our sensations.

Each of Nozkowski's paintings wind up as amalgams of geometric and biomorphic abstraction of varying scale, color, and pattern that appear to me to be an invented pictographic language analogous to one thing leading to the next.

In his drawings, as in his writings, Motherwell argued that the expressive tools of abstraction were not only valid, but among the most powerful means an artist possesses for fully communicating human experience and feeling, including political events and realities.