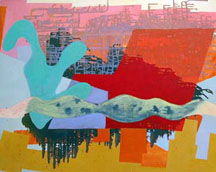 Cecily Kahn has been committed to the tradition of early American abstract painting for many years. In her recent exhibit, however, she began to break free from its constraints by favoring a more exuberant spirit of the creative process.

I have always felt ambivalent about paintings that rely on a certain kind of past orthodoxy as a pretext for indulging in nostalgia. That is not to say, “Nothing is new under the sun. That is for the sun, but for man everything is,” as Apollinaire said. This subtle difference has to be acknowledged and examined, and a few painters have succeeded in this vain, including Thomas Nozkowski, Louise Fishman, Peter Acheson, Susan Frecon, Chris Martin, and to some extent Elizabeth Murray. The structural and spatial problems of late cubism, as well as its developed language of abstraction and content in non-figurative painting, has been a serious preoccupation among American painters since the 1930s. But what was relevant for that time—a period when most of the painters were leftist radicals who vehemently rejected the provincialism inherent in regional styles and painting on the American scene—is hardly applicable to New York in the present day (or the rest of the world for that matter). One tends to forget that, perhaps due to the dominance of the global economy and multiculturalism, there hasn’t been any new art movement since Neo-Geo!

To her credit, Cecily Kahn has stuck to her beliefs and is able to proceed slowly and carefully within her limited means. With a lightness of spirit and willingness to experiment, Kahn’s new body of work is far more exciting than her previous efforts. As she finds ways to overcome the formal structure of composition, Kahn has introduced new elements by increasing the active field with surface variables in relation to their interlocking rotation of curvilinear and rectilinear forms. Unlike the cubist imitation of real surfaces such as wood grain, marble, and wallpaper motifs, Kahn’s application of the technique belongs solely to the language of painting: cross hatching, stippling, ripping, abstract patterning, or simply mark making. In addition, one observes a departure from the synthetic cubist structure; her compositions as a whole are far less stable. For example, in the paintings titled “Life” (2004) and “Reach” (2004), the overlapping planes tend to lean off the grid towards a predominant diagonal movement.

The most successful painting in the show is “Untitled” (2004). Apart from the obvious movement of the central configuration in accord with the horizontal field which is placed below the center axis, the treatment of the two pronounced biomorphic forms against the two rectilinear ones—all of which vary in shape, proportion and location—is so well contrasted that it feels less cluttered and far fuller of breathing space. This can be said of a few of her other compositions as well; in spite of an implied still life construction, they evoke the natural tension between stability and instability.

In addition to Kahn’s color sensibility, where saturated hues play their transparency against the opacity of local colors, the balanced combination of painterly surfaces and their active fields yields a greater freedom in the non-mimetic elements of image-signs. The scale as well is based on intuition rather than well measured proportion. In the end, one comes away thinking that the painter is already aware of this new and exciting demand.


96. A second-floor gallery on Mercer and Prince Street, a studio in a former synagogue on Hester Street

Each painter is highly aware of what they are doing: their artistic narratives are largely technical, emphasizing formal and chromatic elements that reveal an emotional depth in their work. The pleasure in seeing this exhibition is the kind of pleasure that one expects to see—and to feel—when the circumstances around a show are focused entirely on the art of abstract painting.