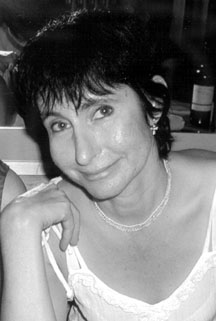 Annie loved looking at art. She was the most open and enthusiastic person I’ve ever met when it came to studio visits: she loved “discovering” a new artist. Annie told me that her art consisted of putting together shows and if she didn’t have a show that she was organizing, she wasn’t happy. She had a habit of curating what she would call “small” group shows that would inevitably be anything but small—huge, all-inclusive efforts that she somehow managed to not only pull-off, but to make spectacular.

I met Annie in 1994 when she came over for a studio visit at the suggestion of our mutual friend Wendy Hirschberg. She offered me my first one-person show at Black and Herron and we became friends. At the time my work involved installations with cast shadows.  I arranged pieces of paper on the wall, “capturing” the shadows to make “drawings.” Annie thought the “drawings” were traditionally rendered, even though I told her they weren’t. She insisted they were drawn until I turned off the lights and she saw that the paper was blank. She often reminded me of this story, recounting her surprise at the disappearance of what she thought was rendered. I think of it as an example of her complete faith in her vision, holding onto it, no matter what.

Annie had a strong sense of priority. Her son Erik came first and everything else was second. It was great to witness her joy, as she would update me, bursting with pride, about how well Erik was doing.

In the last couple of years, I always felt a great relief when I would go to an opening in the neighborhood and see Annie. Fearing the worst and not knowing how to approach the subject of her illness, she would put me at ease with typical Annie grace by showing off her latest hat or growth of new hair. She made everyone believe along with her, that maybe she could hang in there long enough to beat the cancer.

Annie lived her life in the exact same way that she faced her illness: with great courage and tenacity, a fierce optimism and an amazing grace. I feel fortunate to have been her friend.

I knew of Annie Herron long before I got to know Annie Herron. In the early eighties while working with Barry Blinderman at the Semaphore Gallery on West Broadway, she was already recognized as an “eye,” someone who wasn’t afraid to give untested talent a shot. A “soft touch,” one local artist on a campaign to woo her, painted and displayed a huge impressive portrait of Annie in the storefront window of his south Soho studio. I think it got her attention. As a southern girl, Annie never totally lost the soft lilt of her language, and she projected a lady-like congeniality and independence that would have made Scarlet O’Hara proud. The roster of names she championed, with her special commitment to female artists, bears out this independence. Ellen Berkenblit, Lori Taschler, Lady Pink, and Amy Cutler are just a few of the many Annie went to bat for.

Whether intentionally of not, Annie found herself at the crux of activities that in hindsight have become signposts in the development of New York’s progressive art scene. While directing Semaphore East, she curated an exhibition of closed and gated stores and bodegas painted by the late Martin Wong. Ironically, though met with mixed response, the show was seen critically as the harbinger of the end of the East Village scene, and within a year the E.V. vanished. Never one to whine, it was only a few short years later that Annie found herself again at the focal point of another artistic impulse about to reach critical mass. Test Site, her pioneering foray into Williamsburg in the early nineties, is generally considered to be the first “commercial” gallery in what is now acknowledged as New York’s cutting edge neighborhood. The word “commercial” may not be quite appropriate. Though Annie was one of the most sensible and practical people I’ve met in the gallery galaxy, the business end of things seemed more of an excuse to justify her overwhelming passion of being around and promoting art and artists than a financial practicality. After another stint in Soho with Black and Herron, I got to know her when she returned to Williamsburg as co-director along with Larry Walczak of “eyewash.” Through the many shows she curated at galleries and other institutions and her work in the artistic community, Annie created her own unique place in our art world. Her self-sufficiency and ingenuity allowed her to make something great out of very little, to start fires by rubbing two sticks together, an altruistic dedication that we, in our better moments, could all strive for.

Who won’t miss that wonderful smile and those cheerful green eyes? Greeting Annie Herron was always a joy. Being around her was a delight. Her positive take on things and enthusiasm for life always made time with her special. People like Annie don’t come around often enough in our lives and this makes her loss that much more difficult.

Annie loved visual art and her love for it was second only to her son Erik. She devoted much of herself to the art world and her involvement was one of integrity and generosity. Years ago she developed a reputation as a curator who would find the time to actually show-up for a visit in your studio no matter who you were. Annie once said, “When you do a studio visit you always have to give something back.” I recall her returning from studio visits sometimes several hours after she left for them. The artists she eventually championed were people she got to know and care for dearly. Similarly, she had the capacity to cherish and retain friendships with folks she had meet throughout her entire life.

The art world that Annie Herron chose to live in was one of discovery, support, and joy. Annie had a keen eye and a big heart and she was known to pull for the underdog. She became very involved with emerging artists and gave several artists their first one-person shows. Annie had an admirably pure approach to visual art and her selections for exhibitions. She wasn’t swayed to compromising for the sake of sales or press. She often got that anyway. Annie’s fearless approach to curating spawned several exciting theme exhibitions and her independent spirit led to many shows in many venues.

Annie was diagnosed with leiomyosarcoma cancer in September of 2001. In her ensuing battle against this rare and deadly cancer she became a model for anyone who had ever had to face adversity. To see Annie on the street or wherever, she would still greet you with that wonderful smile and those cheerful green eyes. She never gave anyone reason to be sad on her account. She continued to go to social functions and galleries. Three weeks before her death, a frail Annie bravely got on a plane and traveled to Illinois State University to lecture on an exhibition of works on paper she curated. But after several kinds of chemotherapy, medicines, and various other procedures, Annie’s valiant battle came to an end.

After all is said and written, perhaps what we’ll best remember about Annie is her undeniable spirit—a spirit that so often reminded us that no matter how difficult and complicated life can be, it is surely worth living and it is simply a joy to be alive.

SHARI MENDELSON is an artist, based in Brooklyn, NY.

Larry Walczak is the curator of eyewash art gallery in Williamsburg, Brooklyn.

A Tribute to Peter Lamborn Wilson

There were two Peter Wilsons, the public and the private. He was very much like William Burroughs in this regard. The public image was something of a Holy Monster, while the private individual was warm, humble, and wholly dedicated to his vocation as writer.

Lance was a Renaissance Guy: an Athlete, A Sculptor, A Painter, a Dancer, an Actor, a Poet, a Protector, a Prankster, and about ten other things that don’t have names. Poet tops this list. Words were his swords.