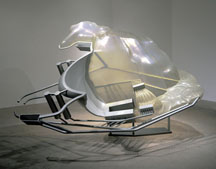 When I initially saw the seven line drawings of Los Angeles-based artist Jennifer Pastor’s “Flow Chart for the Perfect Ride” (1999-2000) in Drawing Now: Eight Propositions at the Museum of Modern Art, lines flowing through the roiling motion of a generic cowboy on a furiously bucking bull, I immediately read them as instances of clever, ironical Pop art. Watching the animated film of the bull ride, which is part of The Perfect Ride currently at the Whitney, changed that: drawn in simple black lines, the bull undulates and torques against a bright void white background, the cowboy, hat on, arm waiving, holding on through the impossible vertical arcs. Despite the goofy rodeo theme (this piece doesn’t aspire to the wacky sublimity of Matthew Barney’s bull ride in Cremaster 4), and the way an animated film of this kind inevitably evokes cartoons, the bull ride is remarkably formal, even diagrammatic, a strangely ephemeral graph of a flow of energy in which, the more one watches the film, the bull and the cowboy are almost incidental.

The title of the three interrelated pieces Jennifer Pastor has installed in the Whitney’s first floor gallery, as part of the museum’s contemporary art series, contains an internal tension, an ambivalence, that is indicative of Pastor’s work as a whole. What is a perfect ride? A perfect ride in a rodeo, or for that matter in surfing and skiing, combines recklessness, danger, power, elegance, and beauty. In the perfect ride, one finds the point of dynamic equilibrium just shy of the tipping point into chaos, at the threshold of loss of control. The convergence of forces in nature and human life make perfect rides, if not technically impossible, at least fleeting and unstable, and that may be one of the reasons why the bucking bull ride, despite its whiff of pop irony, is also curiously moving. The concept of the perfect ride is, above all, an apt and flexible metaphor for the nature of art.

Jennifer Pastor might be thought of as a conceptual sculptor in the vein of Robert Gober and Matthew Barney, both of whose work appear to have influenced her. Yet while Gober’s strongest pieces are personal, erotic, and literal in the best sense, and Matthew Barney’s art to date constitutes a kind of hermetic, Wagnerian myth making, Pastor’s meticulously researched work is coolly reticent and allusive. The largest of the three pieces in The Perfect Ride is a construction in steel, aluminum, and clear molded plastic that was inspired by the water circulation system of the Hoover Dam. Set on a narrow base and tilted to one side, light aluminum struts and gates frame the mass of plastic, which pours down in heavy twin streams, spilling, eddying, and spreading. Up above, the plastic is gathered in a formless, dome-like blob, and as it flows down—oozes —it does not so much take on a form as seek a form around, under, and through the aluminum structure. Anyone who has looked out across the Hoover Dam’s awesome spill gates will understand that what is astonishing about it is not so much the scale of the curving cement as the staggering power of the water; Pastor’s model reflects the precariousness of the organizing structure itself. And despite the slick, prefabricated look of the materials and design, when closely inspected, the plastic swirls, waves, and ripples have the subtlety and touch of the handmade.

Pastor’s water circulation system is of course a fabricated model, and it self-consciously adopts the sleek and often kitschy style of high-end, computer-generated architecture and design models—one can easily enough imagine her dam in the middle of a spacious corporate lobby. The lyricism of the animated rodeo ride is partly masked or resisted by the cartoon format, and similarly, the immaculate production values of the dam conceal the powerful and in the end uncontrollable forces it reflects: the more I looked at the dam, circling around it, the more it struck me as a dam in the process of failing, of being torn apart and inundated by the cascading force of the water. Pastor is clearly interested in the human effort to control and harness natural forces, whether for pleasure or economy, but also in the delusion that it is even possible. Both the rodeo ride and the dam are, in different ways, abstract diagrams packaged in familiar and commodified idioms; and in the end, their cute perfection points toward failure, the dam gates sundered, the faceless cowboy dragged through the dirt.

Perhaps the most beautiful and enigmatic piece in The Perfect Ride is the polyeueurethane model of the inner ear, based on Pastor’s memory of such a model in a medical museum. Affixed to a steel rod, its color a sterile white, it streams down, opening into sinuous folds, coils, tubes, and channels. Of all the work in the current show, this elegant and mysterious inner ear is the one which most closely suggests the influence of Matthew Barney, especially his drawings and sculptures of orifices, but Pastor’s sculpture is at once more intimate and analytical. The inner ear is a piece of complex biological engineering that articulates and amplifies sound, but unlike the great masses of water that descend through the gates of Hoover Dam, sound happens in time, and is fleeting. Pastor’s replica is clean and immaculate, yet the fact that it is based on what one assumes was a precise anatomical model, lets us know that it is also most likely grossly inaccurate; it is, in a way, the distorted memory of what is already a confused idea of perfection. Our senses and our brains are the ultimate means through which we sort and control the world; they are also, as philosophers like David Hume understood, the means by which we get the world wrong.

We live in a world almost wholly governed by abstract, and alienated, concepts of design and lifestyle, of marketing and consumption, in which our relationship to the world is one of unreflective entitlement, and in which the personal, idiosyncratic gesture has increasingly come to seem yet another stylistic posture. We live in a world in which we have come to expect perfect control and a perfect accord between our desires and fantasies, and the various types of commodity marketed to satisfy them; we expect the perfect ride, in sport and in life. One way of addressing this is the response of the traditional avant-garde: outright and even violent refusal, an attempt to stand outside the enclosing circumference of the spectacle. This kind of project is at this point doomed in advance, for our minds are already trained to what Vilém Flusser called “total design,” and our most basic visual and experiential vocabulary is that of the commodity. Jennifer Pastor’s work is, by contrast, subtle, effective, and open-ended. She takes the fetishized object and the clichéd genre as premises, as inevitable and unavoidable given where and who we are, and then creates tensions and discrepancies, material and metaphorical, between the gestural and the prefabricated, the perfect and the failed.

Charles Baudelaire once said, in stark contrast to the views of writers like Clement Greenberg, that he assessed a work of art in part by the way it worked in his memory, hours and even days after seeing it. After seeing The Perfect Ride, I kept imagining that the perfect ear Pastor tried to remember was one in which sound went dead. For all its L.A. coolness, ambivalence, and glossy design, The Perfect Ride is full of a strange kind of longing.