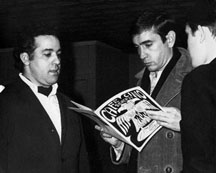 In the early sixties a handful of downtown coffee houses and churches started offering makeshift stages and receptive audiences to new plays, provoking a flood of unsuspected talent and creative energy. Steve Bottoms’s new book Playing Underground gives the rambunctious pioneers of Off-Off-Broadway the serious, simpatico attention they have long deserved. Sniffed at by the establishment all through their heyday, they persisted in making theater that was close up and personal, honest, immediate, and imaginatively untamed. More concerned with projecting their own ideas of beauty and broadening the minds of their audiences than with packaging themselves for media consumption, largely ignored by academics and serious critics, these wonderful artists and facilitators seldom got their due.

As senior theater critic at the Village Voice, I was virtually the only reviewer interested in the first years of Off-Off-Broadway. Having known everybody in the scene, having participated myself as director and/or playwright and/or lightman at all the first-generation venues, I shared memories and information and tried to help Steve Bottoms see the whole picture. He delivers a wealth of detail and long overdue interpretation, and to my mind he gets everything right. 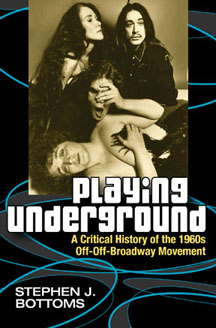 Steve, who teaches and directs at the University of Glasgow, turned on to Off-Off-Broadway by way of writing his thesis on Sam Shepard. Over several years he tracked down the principal survivors, traveled the U.S. to meet them, read many dozens of plays, ferreted out historic production photos, and patiently imagined his way back in time, into the Caffe Cino on Cornelia Street, the choir loft at Judson Church, the parish hall attic at St. Mark’s in-the-Bouwerie, the many incarnations of Ellen Stewart’s La Mama. He listened to often contradictory stories and spins and made his own good sense of them, narrativizing in a lively voice, mixing in quotes from interviews and reviews (including mine), focusing in on highlights and exemplars and tracing the dramatic arc in what happened. He makes it shine.

That special moment had passed by the end of the decade. The tight community in lower Manhattan exploded, and splinters flew in all directions, landing in theater departments and theaters large and small across the country, carrying an energy that still feeds a vibrant alternative theater.

Reading this book is like re-experiencing part of my own life, not the happiest part but the most engaged. It is gratifying to see work I alone esteemed freshly scrutinized and found admirable. The book looks beyond Shepard and Lanford Wilson and rescues playwrights H.M. Koutoukas, Robert Heide, David Starkweather, Jeff Weiss, Julie Bovasso, Doric Wilson and many others from total obscurity and neglect. It honors the work of major unsung directors including Lawrence Kornfeld, Tom O’Horgan, and John Vaccaro and conjures the inspired, indispensable performances of countless actors. It brings Joe Cino, Ellen Stewart, Ralph Cook of Theatre Genesis, Rev. Al Carmines and Joe Chaikin of the Open Theatre to life on the page as thinkers, visionaries, and individuals keenly involved in the life of their time.

The Off-Off-Broadway instigators overcame obstacles and indifference, breached taboos, invented key techniques of transformation and physicalization, demanded that theater catch up with the other arts, connected New York to radical developments abroad, defied the values of consumer theater. Their story insists that theater is democratically doable, though harder than ever in the present economic dispensation; that what matters is the present-tense encounter of artist and audience. If you astonish them, so much the better.

Michael Smith lives in Oregon. He can be reached at [email protected]

Since his passing in 2004, Morris’s paintings have found new audiences, largely thanks to James, the painter Carol Rhodes, and a handful of adventurous European curators and dealers. Maxwell Graham, the founder of Essex Street, adds his name to that list with this presentation, providing a tantalizing introduction to the artist for North American viewers.

Daphne A. Brooks’s Liner Notes for the Revolution

Adored by audiences and critics through the years, Brooks gets behind the pop fandom and the cultural image-making and puts plainly in front of the reader’s gaze how Black women musical artists are, by their very nature, revolutionary cultural figures.

Winter Jazzfest 2020:
My Kind of Marathon

With its scores of stages already filled with superb musicians every night, does New York need a Jazzfest? I’d say a strong yes. Besides offering a comparatively cheap way to see a ton of great music, it does link disparate musicians and their audiences in a larger enterprise.

Alana Hernandez is Executive Director & Curator of CALA Alliance, a multidisciplinary Latinx organization in Phoenix, Arizona. Hernandez fosters Latinx artistic talent in the Metro-Phoenix region and beyond while strengthening cultural ties to the Americas.