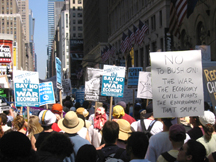 Protesters against the Bush agenda, in midtown on Sunday, August 29, 2004, the day before the RNC began. Photograph by Peter Krebs.

The silence has been deafening. Despite the extensive press coverage of the RNC arrests—which shows that Pier 57 was either the site of wholesale preventive detention or of gross incompetence by the Bloomberg administration and the NYPD—none of the city’s top public officials have spoken out on the matter. What exactly they are afraid of is a pressing question.

Civil rights stalwart Norman Siegel, who is actively involved in the ongoing court battles on behalf of the Pier 57 detainees, suggests that while “most of the city’s politicians want to avoid being seen as defending ‘radicals,’ that’s not the issue. It’s the future of the First Amendment and nonviolent protest that are at stake.” Nevertheless, except for City Council members Bill Perkins, Margarita Lopez, and Charles Barron, all of the city’s elected officials have remained silent about what happened during the RNC. That holds true for progressives such as Representatives Charles Rangel and Major Owens—despite the fact that, along with councilpersons Perkins, Lopez, Barron and Bill DiBlasio, they were among the small handful of elected leaders who joined the massive antiwar protest on August 29.

The rest of the city and state’s elected officials, Siegel suggests, have generally tried to “distance themselves from street protest, despite the reality that such activism is almost entirely nonviolent.” While the 500,000-plus people who took to the streets of New York City on August 29 may seem like a lot of voters to ignore, most pols stayed home (or on vacation). Whether the RNC protests will remain on voters’ minds in next year’s citywide races is unclear. “Normally this problem wouldn’t be an issue in a mayoral election,” says Mark Green, adding that such races “more often turn on more immediate problems of crime and the economy.”

Next year’s campaign could be different, however. As Green notes, “those citizens who care about the Bill of Rights will be ‘swing voters’ in 2005 who could vote for either the socially liberal mayor or the presumably progressive Democratic nominee.” Mayor Bloomberg’s track record on such issues could thus have an impact, says Green—assuming, that is, the challenger wants to make free speech an issue.

The Mayor’s record on the First Amendment is indeed terrible. Citing the arrests at the World Economic Forum in the winter of 2002, Bloomberg’s February 2003 denial of a permit for an antiwar march, and the recent fiascoes over the Great Lawn and Pier 57, Siegel argues that there has been “an increasing erosion of basic constitutional freedoms in New York City under the current administration.” As Siegel can attest, the previous occupant of the mayor’s office was clearly not a champion of the First Amendment, either. Republicans, perhaps, believe in free markets for everything except speech.

The refusal of the Mayor and NYPD Commissioner Kelly to appear at, or even send any representatives to, a City Council hearing on the RNC arrests in mid September shows how unaccountable Bloomberg and Co. believe they are on these issues. Perhaps the only time the Mayor will mount a strong case for the First Amendment is in defense of his right to circumvent the city’s progressive public campaign financing scheme. After all, the Supreme Court’s ruling that such spending constitutes “free speech” gives him the ability to put up the $100 million or so he’s vowed to dole out in next year’s campaign.

Other than Barron, who joined the antiwar gathering on the Great Lawn on August 29, none of the likely candidates in next year’s mayor’s race—Miller, Ferrer, Thompson, Fields, or Weiner—have challenged the Bloomberg administration on Pier 57 or related matters. Even more glaring is the silence from Public Advocate Betsy Gotbaum on issues that fall directly within her purview. At Pier 57, Siegel says, “The Public Advocate should have been doing what lawyers did—getting people out.” Gotbaum, however, said nothing about the mass detention, and neither did she offer any statements at the subsequent City Council hearing.

One way or another, the legacy of the RNC will likely extend beyond both the upcoming election and late November, when the State Supreme Court rules on whether to hold the city in contempt for its actions at Pier 57. As New York magazine’s Chris Smith wrote in a preview of the RNC, “Besides being the opening act of Bush’s reelection campaign, convention week is the prelude to Bloomberg’s 2005 reelection effort. And as the mayor reacts to unexpected twists—whether terrorists or mass arrests or some city-bashing slur by Trent Lott—the convention could finally begin to establish a positive emotional connection between Bloomberg and New Yorkers.”

Perhaps there are those in the city who indeed found comfort when the Mayor, amidst the Pier 57 debacle, became more passionate about defending Club Med than the First Amendment. And perhaps there are those who think that there is no place for free speech or nonviolent civil disobedience in the current era. But as the polls—if not the pols—demonstrate, such people do not comprise the majority of residents of New York City.

An artist and her friend are helping install an exhibition of experimental works on an abandoned Lower West Side pier. The women involved in the show are working hard, but the artists whose projects are being shown are all men. It’s the early 1970s. Walking home at night through the empty streets of Downtown Manhattan the two friends feel safer making loud noises, singing off-key and generally pretending to be crazy. One night they find themselves improvising bird sounds based on the first name of the organizer of the exhibition. This impromptu performance develops into a sound piece titled Birdcalls where the artist utters the surnames of 28 male artists in a variety of bird-like noises.