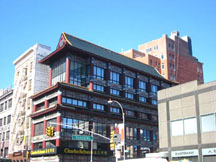 The year is 2015, and the place is Chinatown. There’s a sleek, new pan-Asian cultural art center on Canal Street with a Japanese film retrospective in one hall and a Chinese opera in another. An ornate floating Chinese restaurant is docked in front of the luxury spa/hotel that defines the East River’s now-iconic waterfront. The “Pacific Rim” office district is buzzing with trade deals brokered with Asia, and the garment factories housed in the nearby Fashion Space are the hot places where New York’s up-and-coming designers bring their sketches and stage their runways. The Second Avenue subway stops right in the heart of it all, and there’s plenty of parking.

But where is the man who sells egg cakes from his cart on Grand Street, or the woman who sells international phone cards in front of a store on East Broadway, or the kids who skip out on their ESL classes and hang out at the cybercafes? Where are the Chinese immigrants who’ve made Chinatown the bustling enclave that it is?

Community groups that work with new immigrants, like CAAAV: Organizing Asian Communities, and the Chinese Staff and Workers Association, have their own ideas for Chinatown development that include retaining manufacturing and restaurant-worker jobs, improving the existing dilapidated tenements and creating new low-income housing, and securing health protections for people in Lower Manhattan affected by dust from Ground Zero. These groups would like the Lower Manhattan Development Corporation (LMDC) to funnel some of its remaining funds for these projects. But the LMDC seems more attracted to projects that attract tourism and business, and so far, it’s been very receptive to the eight-part Rebuild Chinatown Initiative (RCI) developed by the 30-year-old nonprofit Asian Americans for Equality (AAFE), which emphasizes cleaning up the streets, beautifying the waterfront, and attracting business and culture to the area.

The two competing visions yield one central question: How “Chinese” will Chinatown remain amid the development boom? The cultural center, Pacific Rim office campus, and Fashion Space are just some of the proposals put forth by the RCI, released this past April after two years of consensus building by the AAFE. While RCI has become the darling of the planning community and the power brokers, some community groups worry that many of the immigrant families, many of whom live below the poverty line, may soon be priced out of the area.

“We’re not advocating for or against the plans,” says Hyun Lee, an organizer with CAAAV. Instead, she says, “Our concern is, who is this ultimately for?”

Despite the massive job loss in Chinatown’s garment and restaurant industries, there are still some jobs left in the area, and even more important, the job centers that send people to work around the city, the state, and beyond are based in Chinatown, as are Chinese-language social service agencies, so new immigrants continue to seek apartments in the neighborhood. “What we need here are jobs and housing,” says Lee. “The cultural center is great if it’s free, but it’s unclear if it’s for the community.” Lee also wonders whether a white-collar plan like the Pacific Rim will help the low-wage workers who have lost jobs.

One of the lead RCI planning consultants, John Shapiro of Phillips Preiss Shapiro & Associates, doesn’t dismiss these concerns. Though uncertain about the initial push for white-collar jobs, he adds, “I’ve had to put aside my own assumptions. Someone says to me, ‘So you think Chinese people can’t move up the ladder?’ There’s no reason we can’t have both job sectors.” And there’s no reason that everybody couldn’t or shouldn’t enjoy a beautified waterfront. “The whole vision,” says Shapiro, “is to position Chinatown as a major national hub on the East Coast.”

But Hyun Lee’s primary concern about RCI is how it would be implemented and whether there would be protections for current residents should improved amenities lead to higher property values and increased rents. Gentrification has already started in Chinatown, and CAAAV is working with the Urban Justice Center to figure out ways to protect low-income tenants, which is particularly thorny in the neighborhood since the actual leaseholder of an apartment often rents space out to others. There are many families living doubled or tripled up, and there’s a highly transient workforce moving in and out of rooms.

So far, most of RCI’s plans remain in limbo. The initiative’s proposal had requested $80 million from the LMDC, but the corporation has been less than speedy in allocating the remaining $900 million of the nearly $2.8 billion of post-9/11 federal aid. According to LMDC board member and deputy mayor Daniel Doctoroff, “It’s important to present clarity of what Lower Manhattan is going to look like as the city attempts to lure tenants downtown.”

The LMDC has adopted some of RCI’s suggestions in its Chinatown Circulation Access Study, which looked at the busy Chatham Square intersection and the Park Row street closure as well as parking and bus traffic problems. In conjunction with the city’s tourism marketing association, NYC & Co., the LMDC launched Explore Chinatown, a $2 million campaign creating street maps and kiosks to bolster the area’s businesses and make for more tourist-friendly visits. The LMDC also has given a few million dollars to renovate neighborhood parks as part of a $25 million Lower Manhattan park beautification effort.

In contrast, “we were hoping this would be a real effort [by the LMDC] on how to retain and improve jobs that really do make sense and how to provide other options for the jobs that leave,” says David Dyssegaard Kallick, from the coalition of the Labor Community Advocacy Network. “This should be an exciting opportunity, and there’s money to do this, but it’s bottlenecked at the LMDC.”