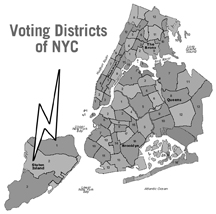 While the majority of voters in the five boroughs will cast a vote against Dubya and what he stands for, some will actually go to the polls and vote for Republicans to represent them in Washington. This is especially true in Staten Island, where most of the city’s registered Republicans reside and where the incumbent in 13th Congressional District, Vito Fossella, is young, slick and extremely right wing by New York City standards.

Enter Frank Barbaro: a white, working class, septuagenarian, tough-on-crime Navy veteran running against Fossella for the District that includes all of Staten Island and parts of southwest Brooklyn. While this may make him sound like a typical Staten Island Republican, Barbaro is anything but. He was a longshoreman and a butcher who took his first job at the age of ten working in a factory after school. He ended up getting a law degree, being elected to the State Assembly in 1972, and running for mayor in 1981; in 1997, he was elected to the New York Supreme Court.

Barbaro’s positions are thoroughly progressive but not the kind that the right often childishly targets as “radical” or “out of touch with working people.” Rather, Barbaro, true to his roots, is the kind of progressive from the bygone days of the New Deal era, where social spending, organized labor, a living wage and rights of workers were fought for and supported by a majority of working Americans. “There was a time when the idea that a worker would vote Republican was unheard of,” says Barbaro. “I’m upset that much of the Democratic Party has separated themselves from the ideals of the New Deal and Senator Paul Wellstone. I want to reclaim the soul of the Democratic Party.”

Barbaro is also outspoken about the war in Iraq. Like his potential colleague Charles Rangel of the 15th Congressional District, Barbaro seems determined to advance a position in Congress that overtly challenges many aspects of how and why the Bush administration is embroiled in Iraq. “The most important thing would be to build consensus in all of Congress to get out of that war,” Barbaro says. “The Republicans are dealing in fantasy. We have to stop them.”

In contrast, Vito Fossella is thoroughly pro-war and consistently votes with House Majority Leader Tom DeLay. His official website has an expansive photo gallery that includes shots with President Bush on Air Force One and with Rolling Thunder bikers, as well as endless shots with children and anyone wearing a uniform. According to Opensecrets.org, Fossella receives nearly 98 percent of his campaign funding from business sources.

In fact, Fossella also seems to be in the vanguard of a young breed of Republicans that are similar to the kind of telegenic ultra-conservatives politicians often seen on Fox News.  He recently backed 29-year-old Vincent Ignizio, who won the Republican Primary against 24-year incumbent State Assemblyman Robert Straniere.

Barbaro does not hold back in his criticism of incumbent Fossella. “At best he is one of the dumbest politicians; at worst he is an unprincipled, ambitious politician who is wedded to the right wing and doesn’t stand for anything.” Fossella’s record includes votes to deny overtime pay to workers; against increasing the minimum wage; for cutting funding for environmental programs and enforcement; and, most recently, for repeal of Washington, D.C.’s ban on handguns and semi-automatic weapons. Like Bush, he is a strong proponent of privatizing social security and giving tax breaks to U.S. companies.  “He doesn’t have a scintilla of disagreement with the Bush administration,” says Barbaro, adding that “we’re living in dangerous times and we need politicians to stand for something.”

Of course, such friendliness with business means that Fossella’s campaign has about three times the money as the Barbaro campaign. “Fossella has all the money he wants,” says Denise Devlin, Barbaro’s media manager. “Our fundraising is going well but we’ll never be able to match what he has raised.” And in what seems like typical media treatment for some progressive campaigns—i.e. snobbish coverage—a recent New Yorker “Talk of the Town” piece took pains to describe the dreariness and ill attendance during Barbaro’s announcement that he was running.

Regardless, it will be interesting to see if Barbaro can triumph in the only Republican stronghold among the five boroughs. Most important is that Barbaro seems to represent the kind of Old School progressivism that needs a vibrant and tenacious comeback at the local level in order to be embraced again by national Democrats. “The power in Washington has somehow created legitimacy for their right-wing agenda,” says Barbaro, “and while we can’t match them dollar for dollar, we can work from the bottom up.”

The spell of this book preserves the multiple-layered, multiple-petaled nature of life. Wang’s collection professes the potency of dream and sunflower; it professes the persistence of powers that save.

No COLA, No Contract:
On the Ground at the UC Strike

By Zach Hicks and Rebecca Gross

On November 14, following the largest Strike Authorization Vote in the history of higher-education unionism, some 48,000 academic workers across the University of California system went out on strike.

After stints as the staff photographer for SNCC and riding with a midwest motorcycle club, a young photo-journalist finds himself back in his native New York City where he learns of plans to demolish some 60 blocks of historic buildings, many of them dating back to the Civil War and before.