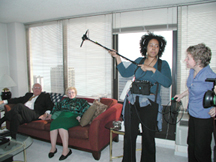 Ever since the documentary began to emerge as a more or less formal genre, the small cadre of nonfiction film academics have tried categorizing different styles of a medium that, in what no doubt amounts to a cliché, defies categories. After all, the act of pointing a camera at something is itself documentary. Nevertheless, categories and expectations of documentary seem to change with the whims of the zeitgeist. Even with the much-touted resurgence in the popularity of documentary film in the public mind, filmmakers, publicists, and the like try to move away from what they perceive are the negative associations the public has with “documentary.” Thus, the publicity material for Jonathan Caouette’s Tarnation states, “While undeniably a documentary at heart, Tarnation mines a greater terrain.” Some of this certainly comes from the association many have with the medium as patronizing and “educational.” Before the cinema verité revolution in the 1960s, where new technology allowed filmmakers to show, the standard was a narrative voice that told. As any intro to cinema studies will point out, through editing, verité can be seen as just another subjective translation of the out-of-camera world to celluloid or videotape. Yet, inevitable subjectivity, especially when it comes to politics, is still seen as a no-no. The director of

Going Upriver: The Long War of John Kerry, a film by an old friend of the Democratic nominee that has an October opening in 200 theaters, told The New York Times that “there’s no narration in the film. It’s one of the things I’m most proud of. That way you can show what John Kerry is like and not have to tell it.” At a time when the silly staged game shows that populate television claim the title “reality,” it’s smart to assume that audiences are beginning to reach a level of sophistication where it’s understood that showing is, of course, telling. And, really, that’s OK.

Jonathan Caouette’s “fiercely personal” film may be one of the first resulting from an obsessive, and seemingly necessary, need to document one’s own troubled childhood, using the kind of technology that became available in the 1980s. Caouette creates an insane amalgam of images, sounds, and textual narrative that works only because he began recording himself and everything around him at the age of eight. More than that, the film is a testament to the cruelty that dysfunctional families breed and, perhaps, the saving grace of being able to document, archive, and regurgitate in a hypersubjective way that was possible only within the past couple of decades.

This film about Republican Illinois Governor George H. Ryan’s pardon of all death row inmates is finally hitting the theaters after NBC, in an anomalous move, bought this independent film at Sundance and showed it during its usually sensationalist Dateline slot in August. Ryan was, of course, a defender of the death penalty until he actually looked into the cases of people on death row and how many were exonerated, sometimes by investigative work done by journalism students. Besides an excellent primer on the death penalty in the U.S., the film is ultimately a testament to the transformative powers of the simplest of investigations and how paying attention to a few facts can save lives.

Cézanne brings his radical and extreme engagement with the practice of painting to his work on paper, endowing what is ostensibly conventional subject matter—landscapes, portraits, interiors, and still lifes—with an unpredictable charge.

Sister Séance, the most recent novel by Aimee Parkison, far surpassed my proclivity toward all things strange and unusual and emparted a new context for one of the greatest and most fascinating movements of the 19th century.