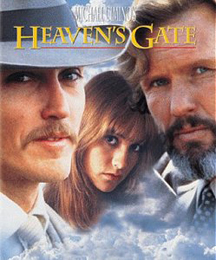 It’s all Sergio Leone’s fault, really. Only he had the audacity to rain graveyard hipster humor and existential irony all over the sacred Western. After 60 years as the dominant mythological trope in American cinema—the first American feature, 1903’s The Great Train Robbery, was a Western—who knew the form was so played, so ripe for a toppling? Even more destructive than Leone’s cartooning of the holy Western (moral) landscape was that, in the immortal words of Clint Eastwood, “it was the first time in history the hero fired first.”

Leone’s trio of spaghetti Westerns (A Fistful of Dollars, For a Few Dollars More, and The Good, the Bad and the Ugly) formed the first domino. Four years later, Sam Peckinpah’s The Wild Bunch proved the flaming sword that swept all before it; equivalent to, say, the first Ramones album, only bloodier. Every subsequent foray had to grapple with Peckinpah’s new cinematic West, one of paralyzing moral ambiguity, villainous heroes, and contemporary social commentary.

Peckinpah, romantic even at his most bloodthirsty, unironically furthered Leone’s themes: that the supposed heroic cowboy brotherhood proved to be male-bonding/sexual sublimation amped to the level of psychosis; that the outlaws’ only moral code was, as William Holden put it, “ten thousand dollars cuts a lot of family ties”; and that the true lure of the Old West was its opportunities for unfettered capitalism made manifest by the (slow-motion) shooting of anybody who stood between you and the money. In other words, this was not John Ford’s heroic West.

Robert Altman’s McCabe & Mrs. Miller provided the final nail. Altman presented the noble pioneer homesteader as a desperate, morals-free empire builder (Warren Beatty as an ineffectual, love-struck wannabe pimp), whose miserable, hard-earned toehold would be ruthlessly looted by better-organized, more corporate predators. Economic critique was not Leone’s or Altman’s locomotive, however. Both wanted to strip Westerns of their simplistic, post–WWII romantic optimism and replace it with a more complex, modern, post-Vietnam, post-Beckett pessimistic one…the romantically failed vision of the hipster. By 1973 even Peckinpah wasn’t making Westerns anymore; his Pat Garrett & Billy the Kid is a eulogy for the form, with another shoot-out ’n’ funeral every fifteen minutes. And yet, these ferociously destructive revisionist pictures remain among the best Westerns, and the best films, ever made. Even the debunkers, at heart, loved Westerns.

Over a decade after the first temple pillars fell, Michael Cimino went to Wyoming with the world’s finest cinematographer (Altman/Spielberg collaborator Vilmos Zsigmond), several wheelbarrows full of cocaine, and as the stories go, a miniature of the Oscar he won for The Deer Hunter dangling around his neck. Supposedly he shook that miniature at anyone who dared disagree with him on-set, in an enraged shriek demanding to know if they happened to have one too. And if they didn’t, then they could shut (the fuck) up and do as they were told. Few movies have produced the variety and depth of deranged drug-fueled anecdotes that emerged from the Heaven’s Gate set. Most center on Cimino’s avarice and hubris.

And few movies have been so universally reviled. MGM supposedly went bankrupt over Cimino’s excesses as he spent close to $40 million on his artistic vision, various mountain properties, and the wheelbarrows of cocaine. But are 40 million 1980 dollars all that excessive compared to the $120 million dropped on this summer’s Jackie Chan’s Around the World in 80 Days? Another aspect of Heaven’s Gate legacy—that, like the financial and pharmaceutical excesses, can’t be separated from the viewing experience—is the rabid, pack-dog cowardice of the massed American film critics at the time of Gate’s release. Each tried to outdo the other in shrill condemnation, hollering that it numbered among the spectacularly worst films ever made—that it was an obscene squandering of coin, a travesty of the immortal horsey idiom. And most took a stridently high moral tone against Cimino’s mad ego, even though that’s why directors get hired in the first place.

Suffice to say that Richard M. Nixon got his rep rehabilitated sooner than Heaven’s Gate. Suffice also to say what should be obvious in the face of that kind of critical unanimity: the film is a harrowing masterpiece, a poetic epic of the kind hardly attempted—by Americans at least—since D. W. Griffith, a detailed study of the pathology and sociology of class war in the guise of an action-driven historical epic wrapped around a heartbreaking love triangle with class-war implications of its own. With Cimino/Zsigmond’s wide-screen Bierstadt vistas and Leone-scale close-ups, it’s a privilege to see this new print on a big screen. Those not compelled by the mythology of Westerns will be enthralled; those who crave it (does anyone still crave it besides me?) will be transported.

The twin avatars of this annoyance are, in order of impact, Isabelle Huppert and Michael Cimino. Huppert, the inexplicable romantic lead, plays a whore (avec integrity, bien sur) in 1890s Wyoming, torn between Kris Kristofferson’s old-money, Eastern-WASP sheriff and Christopher Walken’s (immigrant) murderer of immigrant cattle rustlers on behalf of the Stockman’s Association. MGM’s management went bat-shit at the idea that such an expensive film would star someone unknown to the American public who could barely speak English. And for once, I’m with the studio bosses.

At the time Huppert had total international art-house cred as a brimming-with-integrity arty French actress. But she also came off as a gratingly self-loving prima donna who took a creepily gleeful pleasure in spending most of her onscreen time naked while acting all innocent about it. Among cinephiles, Huppert’s derriere was on a par with Susan Sarandon’s breasts: we knew it/they was/were going to be on display in every picture, and proudly. When the 2004 Huppert, a self-distanced, urbane echt-Parisian, disrobes, there’s an erotic/philosophical tension between her regal, armored essence and her nakedness. Not so in 1980. Pauline Kael saw so much of Huppert’s naked behind in Jean-Luc Godard’s Every Man For Himself that she wrote in The New Yorker, “Sometimes you could swear it pouts as eloquently as her face.”

Huppert serves as the benign example of Gate’s naked hubris. Cimino’s determination to make myth succeeds and fails repeatedly throughout the picture. When his aims become transparent—revealed by ten-too-many intercut shots of somebody’s ironic commentary on the action—the story falls away, leaving only the stunning impenetrability of coke-induced artistic blindness.

Cimino sought a Wagnerian scale, a self-conscious grandeur. When he achieves it, the visual/narrative results are mind-blowing, deeply moving tableaus that seem wholly appropriate to the story. His particular mastery is the dialogue-free crowd scene. The best moments of Cimino’s career derive from the wedding sequence in Coppola’s The Godfather. No one can gather characters and turn them loose en masse with the community credibility that Cimino somehow achieves. This underscores his debt to D. W. Griffith as well.

The film’s composer, fiddler David Mansfeld, leads off the film’s most astounding moment. He roller-skates around a canvas-roofed town hall, fiddling away, calling the immigrant villagers onto the floor. Hundreds follow him, clad in the trademark peasant outfits of eastern and northern Europe. As their sheriff, Kristofferson knows that a mercenary army, hired by the filthy-rich cattle barons of the Stockman’s Association, is en route to slaughter the entire town. The townspeople haven’t yet, as Brecht said, heard the terrible news, and this is their last revel. The dance hall and the frame become increasingly crowded as the music builds, and Cimino never loses the details of individual character as each larks across the floor.

Kristofferson warns the villagers, and they turn on one another with predictable results. In the now-deserted great room, Kristofferson and Huppert take to the vast empty floor for a tender, doomed, extended waltz that’s too sweet to be borne.

After their dance comes class war with a capital C, as the townspeople decide to fight and head out to meet the oncoming army. It’s among the most realistic, emotionally engaging, visually overwhelming battle scenes in cinema history. Cimino’s obviously haunted by the final shoot-out of The Wild Bunch, but he suggests a more timeless kind of war, one composed of dust, blood, confusion, and madness. His presentation of the raw hatred of the rich for their usurpers and that of the downtrodden for their oppressors has no equal for bitterness or ferocity. They just plain want to kill each other, and by dint of being out West, beyond the law, and armed to the teeth, they can.

For a putatively drug-addled egomaniac, Cimino demonstrates a subtle grasp of classical structure. The first three-quarters of the nearly 200-minute film are devoted to showing us the developing forces in opposition, each with their mores and minute idiocies. The opening twenty-minute set piece is Kristofferson’s Harvard graduation, with its implications of an Eastern elite determined to lift up the ignorant downtrodden of these here United States. It’s basically wordless, and proves Cimino a master of the mise-en-scène from the jump. It also establishes Kristofferson as the quintessential moral center of the rapidly vanishing West: cultured, two-gunned, shit-faced drunk, high-minded, grief-stricken, murderous, and conflicted.

The Stockman’s Association massacre is led by pompous high-WASP snotnose Sam Waterston in a performance of repellent conviction. Kristofferson’s got issues of his own as he tries to convince Huppert to flee the armed mob. While half of their scenes together are crushingly real and half seem to be between strangers reading dialogue, Huppert gets better and better as the picture goes along. Kristofferson, in his prime, seems so damn American: Gary Cooper, Sam Shepard, John Doe, Kristofferson. They’ve all got that über-American face. Even as Cimino depicts the battle for America’s moral destiny as being between the sincere, primitive immigrants and the decadent entrenched interests, the real struggle takes place in Kristofferson’s soul. And Kristofferson’s got the soul to pull it off.

David N. Meyer would rather have his country die for him.

A Wonder to Behold: Craftsmanship and the Creation of Babylon's Ishtar Gate

The Ishtar Gate was created in the service of the gods for the divine protection of the city, manifested divine powers on earth as the entry point of the gods into the city, and formed Babylon’s political and religious center. It represented the culmination of centuries of religious thought, technological advances, and artistic achievement.

Ficre Ghebreyesus: Gate to the Blue

Gates, passageways, windows, frames: the paintings of Ficre Ghebreyesus are rife with portals, thresholds through which one is transported to reimagine notions of home and foreign lands, history and memory, self and other.