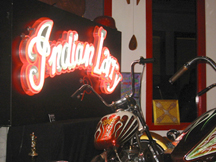 A few of Indian Larry’s handmade motorcycles in his shop. 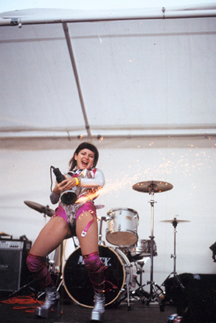 Indian Larry died on August 30, 2004, after an accident while performing one of his trademark motorcycle stunts. During the Liquid Steel Classic and Custom Bike Series show at Cabarrus Arena and Events Center in Concord, NC, Indian Larry performed a stunt where he stood up on his motorcycle seat and lost control of his bike.

Born in Cornwall-on-Hudson, NY in 1949, Larry Desmedt was a longtime resident of the Lower East Side. His motorcycle shop has been a Williamsburg institution for the past four years. Before that, the same shop was known as Gasoline Alley. He despised both the name and its co-owner, so Larry bought him out and started Indian Larry Enterprises.


Indian Larry was best known for his appearances on the Discovery Channel’s “Great Biker Build-Off” show, which showcased his skills as a master mechanic and builder of motorcycles, as well as for being a stunt man. He also appeared in the movies Quiz Show and 200 Cigarettes, as well as on HBO’s Oz, and the Discovery Channel’s Motor Cycle Mania II. He appeared in a Harley Davidson commercial and was photographed by Robert Mapplethorpe. His numerous tattoos spoke volumes, including the lines across his throat that read, “In God We Trust/ Vengeance Is Mine/Sayeth the Lord/No Fear.” Indian Larry even had his own theme song, which put music to the words from his tattoos.

A memorial was held in and around his motorcycle shop, Indian Larry Enterprises, on N. 14th St. in Williamsburg from 11:00 am to 8:00 pm on Sunday, September 19. The event was packed with thousands of bikers from all over the country, including Billy Lane, several Hells Angels, and members of the Rumblers car club. The crowd was so large that parking extended to many surrounding blocks, and several cops directed traffic. The entertainment included Six Gun Republic, a psychobilly band, an ice sculpturist that created a likeness of Larry dressed in full Native American headdress, and a woman who used a circular sander to grind against her metal-plated bikini.

Indian Larry is survived by his wife Bambi, the Mermaid of Coney Island, as well as two Chihuahuas.

Brian Molyneaux is an author and staff photographer for the Brooklyn Rail.