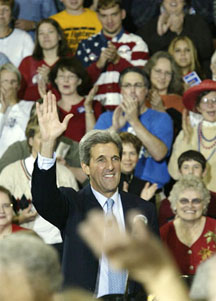 John Kerry is welcomed by the crowd gathered for a discussion about strengthening the middle class during a visit to Tipton, Iowa. Photograph by Kerry-Edwards 2004, Inc. from Sharon Farmer.

In Crossville, Tennessee, population about 9,000, you’re as likely to see a billboard that asks “If You Died Today, Where Would You Spend Eternity?” as you are to spot a bumper sticker that reads “I § G.R.I.T.S.: Girls Raised in the South.” The discount shops here include a Bible Factory Outlet and a wholesale store for pontoon boats, located in a weathered strip mall on Genesis Road. Known fondly as the “golf capital of Tennessee”—boasting more than 200 holes atop the Cumberland Plateau—Crossville is the Cumberland County seat. A retirement community located midway between Nashville and Knoxville, Crossville has a conservative Republican base.

Along Interstate 81, which passes through Crossville on its way north to Virginia, red corn poppies flourish beneath lilac dame’s rockets and white Shasta daisies, and people here seem to be talking more about their allergies than the coming presidential election. But the community’s Democrats—citing new energy and a drive to elect “anybody but Bush,” according to Crossville native Dennis Hatler—are positioning to change that.

Already a new billboard has gone up on Highway 70 North near Crossville. On one side, the sign shows John Kerry over an image of the American flag and reads, “America Deserves a President As Good As Its People.” The other side shows Kerry with running mate John Edwards: “Leaders America Can Trust.” One of three billboards recently erected by the county’s Democratic organizers, the new sign, Hatler says, is just the beginning of a campaign that has caught local Republicans by surprise.

“The Democrats here had been beaten down” by the 2000 election, in which Al Gore failed to carry his home state of Tennessee, says Hatler, 55, a semiretired accountant and an activist with Tennesseans for Kerry. “But we’re making progress. [Republicans] are in shock that the Democrats are working as hard as they are in this area.”

In the 2000 election, George W. Bush carried Cumberland County by about 3,500 votes, or 58% of the total, according to CNN election results. But the local Tennesseans for Kerry group—one of the most active in the state behind the Knox County, Nashville, and Memphis groups—hopes to reverse that outcome in 2004. Crossville voters are keyed into economic issues, according to Hatler. “A lot of people in this area are antiwar and have been against Bush all along, but the economic issues—losing jobs overseas, high gasoline prices, health care, and social security—are important. Those are the major things in this area drawing the undecided and apathetic voters” to Kerry, he says.

These are key issues for voters in the state’s urban areas as well, according to organizers at the Kerry campaign headquarters in Nashville. Jean Carter Wilson, state co-chair of Women for Kerry, says the response to the Kerry/Edwards campaign in Nashville—home to Al Gore and the majority of the state’s Democrats—has been strong. “The big question we’re getting asked is about advertising and why, so far, we’re not seeing big buys on either side. But we’ve got streams of volunteers coming through the door here. At every appearance [of Kerry or Edwards], we’ve had a mob.” Wilson adds that “when Kerry visited Nashville a few weeks ago”—he addressed the American Legion in Nashville on August 31—“we had 3,500 people at the airport to greet him at eleven o’clock at night.”

Wilson hopes that the Kerry campaign can win the state via what amounts to almost a covert-action strategy. “Gore losing the state in 2000 served to greatly energize Tennessee Democrats,” she says. “We want the Republicans to continue to underestimate us.”

One group taking on a more visible role in Nashville is the Music Row Democrats, a coalition of country music stars and industry leaders who united in 2003. They were “fed up with feeling as if they had to apologize for being Democrats,” according the group’s Web site. In an address at an MRD meeting in February, legendary songwriter Bobby Braddock explained: “Country music is the music of everyday people. Why would we not belong to the party that sympathizes with the underdog?”

Country music, Braddock continued, is “about families and mommas and babies. Why would we not belong to the party that cares about health care for seniors and children? Why would people in the music of wide open spaces and green grass not be in the party that wants to protect God’s green earth from the polluting, global-warming big shots that the Bush administration loves and defers to?”

In the weeks leading up to the November election, country stars including Emmylou Harris and Steve Earle will lend their talents to MRD-sponsored “Kerry-oke” nights to raise money for the Democratic ticket.

Just up the street from Music Row at Bongo Java, a crowded coffee shop in the artsy Belmont/Hillsboro Village district of Nashville, the outlook among the mostly college-age crowd seems positive for Kerry. A gathering place for students from the city’s five large universities—including Vanderbilt University around the corner and Belmont University across the street— the coffee shop is probably best known for the “NunBun,” a cinnamon roll baked on the premises in 1996 that was said to resemble Mother Teresa. The “immaculate confection” generated national attention and stirred up enough controversy that ultimately Mother Teresa’s lawyer contacted the shop to request that they stop selling merchandise featuring the saint’s image.

Today the counter at Bongo Java is pasted with newspaper clippings that follow the Bush/Cheney presidential campaign. A USA Today headline from coverage of the Republican National Convention once read, “Bush Promises a Safer America.” Now taped to the coffee shop’s tip jar, the headline has been altered: “Safer” is crossed out with thick black ink, and the headline reads “Bush Promises a Whiter, Scarier America.”

The baristas at the shop—who on some mornings resemble an all-girl punk band—whir cappuccinos and drizzle vinaigrette over side salads as locals gather here to read the paper, chain smoke, and type on laptops. Sarah Moore, who’s been a regular at Bongo Java since moving to Nashville in 2001, says most of her liberal twenty-something friends wouldn’t even consider voting for Bush. However, Moore says her gut reaction is that the rest of the state favors the incumbent. “Especially around here, with Ft. Campbell being so close,” she explains, “there’s so much ‘support our troops’ sentiment. More often than not, people say ‘support our troops’ and mean ‘support President Bush and his completely insane and unfounded war.’”

According to Moore, who was raised about two hours from Nashville in Chattanooga, the state’s fourth largest city, positive response to Kerry in the state’s urban areas may not translate into overwhelming votes for the Democratic ticket in November. “I’ve seen a huge number of pro-Bush yard signs and bumper stickers. I think that there’s a lot of older money in the state and a lot of wealthy white families, as well as a lot of die-hard conservative, salt-of-the-earth-type rural people in Tennessee, to say nothing of the huge percentage of Tennesseans who belong to evangelical or ultrafundamentalist Protestant churches. I’m still not really enthusiastic about Kerry’s chances here, much as I hate to admit that,” she says.

And Moore may be right: The most bleak among recent polls shows Bush leading Kerry by 16 points in Tennessee. The statewide poll, conducted by Mason-Dixon Polling & Research Inc. of Washington D.C., reports that of the 625 registered and likely voters polled, 53% would vote for Bush, 37% would vote for Kerry, 9% are undecided, and 1% would vote for Ralph Nader. Tennessee has favored the winner in the last 10 presidential elections, and that the Democratic ticket may lose the bellwether state seems certain to voters such as Moore. “I have a hard time believing that we’re going to go for Kerry. I wish it weren’t that way, but&#x2026;” she says with a sigh.

While other recent polls soften Bush’s lead, action on part of the national Kerry campaign indicates that, like Moore, the party has given up hope for a Kerry win in Tennessee. At the Democratic National Convention in July, Paul Rivera, Kerry’s national political director, told an audience of the state’s delegates: “Tennessee is a target. Tennessee is a battleground. We want Tennessee.” But the Democratic National Committee seems to be counting on the fundraising efforts of local activists such as Hatler to draw voters in the state.

Local party leaders are reluctant to talk about how much money the campaign is investing in Tennessee—or whether the party still even considers the contest in the state worth fighting, given the recent polls. Beyond advertisements run nationally by the Kerry campaign, there are no ads targeted specifically to Tennessee. Staff at the state campaign office scoff that Tennessee belongs to the “Bush’s to Lose” crowd. But while Hatler erects billboards and hosts Kerry “grill outs,” the national campaign is concentrating on other, seemingly more winnable states such as Pennsylvania, Colorado, and New Mexico.

Back in Crossville—a community that’s nearly 98 percent white and seems to thrive with the salt-of-the-earthers Moore describes—Democrats are nonetheless optimistic. At the Chestnut Hill Winery off Interstate 81, where Tennessee blackberry dessert wine is the best seller, owner Brenda Givens says that local Democrats are hopeful. “I think with this election we’ll see very positive things for Mr. Kerry,” she says.

Dennis Hatler agrees. In addition to the three billboards already up in Cumberland County, the local Tennesseans for Kerry group has put up 25 smaller pro-Kerry signs throughout the area, and several hundred Kerry/Edwards yard signs can be seen on neighborhood lawns. The group will also launch a radio and newspaper campaign in mid-October, investing nearly $4,000 on advertising spots, according to Hatler. “That may not seem like a lot, but for Cumberland County it is,” he says.

“I’m amazed at how easy it’s been to raise funds and find volunteers in the area,” says Hatler, who seems surprised that the Kerry campaign isn’t paying more attention. “We’re a pretty active group, and voters here are looking for a president they can trust.”

After two years of pandemic silence, the Big Ears Festival came roaring back in March. Hordes of musicians carpetbagged Knoxville’s sleepy downtown for a long weekend of experiment and extravagance.

I’m writing to you from the corner of the world which I imagine in your mind lies somewhere at the dusty crossroads of the Iron Curtain and Auschwitz, south of the Baltic Sea and oblivion.

An Open letter to Hong Kong

I feel like I’m riding a roller coaster every day and night, debating with myself endlessly where to go. Some things that have happened to you have been beyond acceptable. However, I still decide to stay, because it is you who is in my mind, not those vampires who have drunk up your blood.