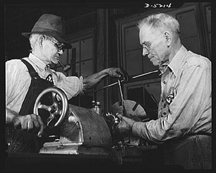 Two grandfathers, both seventy, work in an Eastern shipyard, 1942. The yard kept up production by bringing many older workers out of retirement. Library of Congress Prints & Photographs Division.

One of the most important far-left ideas floating around in the 1980s was the critique of modern wage slavery, as articulated by the Zerowork group and a host of anarchist essayists, most notably Bob Black, author of “The Abolition of Work.” The argument went like this: While ultrarationalized production, technological progress, and general abundance were supposed to have created a society of leisure and plenitude, the vast majority of people in the West are in fact still forced to spend half their waking hours chained to a desk, with their every movement monitored by managers and computers and only short, measured breaks for lunch, until they’re finally set free at age sixty-five.

Well, all that’s changed now—but unfortunately, it’s not the wage slavery part; it’s the age sixty-five part. We now face something that the most hardened Reagan-era anarch couldn’t have imagined: the abolition of “retirement.” Anyone paying attention to the government’s continued attacks on Social Security, the slow death of the corporate pension, and the recent millionfold increases in the cost of medical insurance has to wonder: How in the world will anyone but the very rich ever be able to stop working? The answer is simple enough: They won’t.

Though this trend may not play out for another decade or two, there are clear signs that it’s already in motion. In a recent speech, Federal Reserve chairman Alan Greenspan suggested that, due to increasing demands on the system, government programs like Social Security and Medicare, as well as corporate retirement plans, need to be “recalibrated”—that is, scaled back. He also recommended “policies promoting longer working lives,” due to increased life spans and better health. Increased life spans? Better health? Maybe. But one way or the other, the decision to continue working past the current retirement age probably won’t be a freely made one. The newspapers are full of stories of seventy-five-year-olds coming out of retirement to become greeters at Wal-Mart stores—not something a retiree does for the fun of it. And the number of bankruptcies among the elderly, a group not especially prone to bankruptcy in the past, has suddenly skyrocketed in the past few years. In addition, mortgage and credit card debt have been soaring among retirees.

The most common reason given for the downturn in the fortunes of the elderly is the ever-rising cost of health care. Fair enough: With the price of drugs climbing faster than shares of Pets.com stock in 1999, elderly people are obviously going to be particularly hard hit. But there are other explanations. One is that, with the dismal employment situation of the past few years, many retirees are suddenly having to support their grown children who have lost their jobs—not a small burden for someone living on a modest fixed income. And the elderly have plenty of firsthand problems to worry about. One particularly horrifying example is the recent phenomenon of companies reducing retirement benefits for people who are already retired—that is, reneging on deals that in many cases were cut decades ago, for people who have long since left the payroll. This is a step being taken not only by companies that have gone bankrupt (though, even in these cases, executives haven’t had to give up a dime of their bonuses) but, more brazenly, by companies that are perfectly solvent. Not surprisingly, this has become much easier to do recently, thanks to legislation introduced with little fanfare by the Bush administration (in exchange for some judiciously placed corporate donations).

So what about the next generation of retirees? A recent article in the Wall Street Journal (“More Firms Look at Two-Tier Plans for Compensation,” September 1, 2004) sheds some light on their possible fate: Where it may be too difficult or impolitic to pull the rug out from people who have already been hired, “companies, looking to cut labor costs without direct layoffs, increasingly are adopting a second compensation system for new workers to give them lower pay and benefits.” Among the executives quoted in the article is a spokesman for Caterpillar, Inc., who says the new pay structure “will allow us to better align with the market—still paying people very fair, very competitive wages, but wages that are more in line with what it takes to remain competitive.”

Again, this isn’t a desperate measure being taken by companies that are hanging on for dear life. According to a researcher at the Institute of Labor and Industrial Relations quoted in the same article, “It’s important to emphasize that this isn’t necessarily a function of profits getting squeezed, but of corporate management taking advantage of a relatively weak situation that labor finds itself in.” In other words—with a rabidly business-friendly group running the country and workers in constant terror of losing their jobs, corporations are slashing or eliminating benefits for future retirees simply because they can.

As for the modest government-provided benefits that modern American workers could always count on, regardless of the company pensions they may or may not have coming, those are looking like less of a sure thing all the time. The attacks on Social Security that have been underway for years now have become far more ferocious under the Bush administration. Thanks in part to the massive tax cuts—primarily for the very rich—that have been pushed through since 2001, proponents of “privatization” have finally been able to provoke the funding crisis that they had claimed existed all along. The result will undoubtedly be the “recalibration” of Social Security that Alan Greenspan longs for, as well as a move toward privately managed accounts; these will provide a windfall for Wall Street money managers while making non–market-savvy accountholders dangerously vulnerable to the kinds of scams that ran rampant in the late 1990s. (Think of the many current retirees who have already lost their nest eggs in the crash of the overhyped ’90s bull market.) There’s also the nontrivial problem that Paul Krugman keeps reminding us about—namely, finding the money to pay the people who will be retiring in the next few years, a dilemma that everyone involved seems to be ignoring.

In short, team up a “soft labor market” with an administration dedicated to wringing every penny out of the middle and lower classes for redistribution to the corporate elite, and the result is the most worker-hostile environment seen in this country in many, many years. Suddenly, the idea of even a moderately well-paid worker building up enough of a cushion to take it easy for twenty years seems as implausible as a Horatio Alger fairy tale. Would replacing Bush with a Democrat change this? Not much, especially with each Democratic politician desperate to prove that he’s more business-friendly than the next. (And remember that many of the corporation-hugging policies being pursued by the Bush administration were first floated during the Clinton years, if somewhat less rapaciously.) Could it be that what we’re seeing now is temporary, just the trough in the normal fluctuation of the business cycle? Well, if it was at first it isn’t any longer, as the superrich cleverly scurry to get grossly unfair policies codified as law in ways that could take a half century or more to undo. A popular rebellion against the semicompetent CEOs making one thousand times as much as the average worker may or may not be coming soon, but a complete restructuring of Social Security and the repeal of the estate tax will be a lot harder to roll back.

As for the quasi-paternalistic corporate benefits packages that became standard fifty years ago, there are few laws safeguarding those. Times change, and the time of generous corporate pensions seems to have passed. It could take ages to regain that lost ground, and the next generation—growing up without benefits—may not even think to complain about it. How many people today remember that employer-funded medical insurance once meant that such insurance was actually free?

Lower wages, subsidies for the very rich from everyone else, drastically scaled-back Social Security and Medicare, the end of corporate pensions, untrammeled (and unprosecuted) executive greed and corruption, stratospheric medical costs, and massive debt incurred to pay for it all—put it together and what do you get? More work—if not from the cradle, then most certainly to the grave.

Stanley Morgan is a writer based on Wall Street.

Stanley Morgan is a writer based on Wall Street.

Sixty Lines for Lewis on His Sixtieth Birthday

Gloria Frym’s most recent book is How Proust Ruined My Life & Other Essays (BlazeVOX Books 2020).

Sean Scully’s work has a consistency that gives it a heightened level of energy reflected in both its convincing visual impact and the artist’s diligent production.