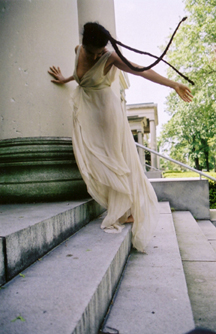 The game of dominoes is a cultural pastime in several of the cities that choreographer and dancer Gabri Christa has lived—Puerto Rico, Cuba, Curaçao, and New York. For her latest work, Christa has woven this rich cultural practice into the fabric of her many-layered Dominata, a multimedia piece of dance theater presented at Dance Theater Workshop in mid-September. While dominoes is a relatively sedentary game, in Christa’s hands it is vibrant and filled with kinetic vitality. Through spoken word and dance, Christa and her four-year-old company, Danzaisa, use the game of dominoes to ruminate about the trials and tribulations of immigration. What emerges here is an intense nostalgia and longing for what has been lost from one’s home country and culture and what has been retained in diasporic rituals and traditions.

Inspired by the dominoes players of the Caribbean and the streets of New York City, a series of square, white folding tables bathed in spotlight take on major roles in Dominata; they are both game boards and dance partners or adversaries. As the work opens, players and spectators crowd around a table watching the proceedings and partaking in—one would imagine—news, political debate, and neighborhood gossip. And it’s from here that Christa gets her dance material and movement vocabulary. The players hunch forward in concentration; they raise hands to foreheads, perplexed, push back from the table in frustration, and throw their hands up in the air in defeat. Meanwhile, the spectators crowd around them, performing their own gestures and poses. The better to see the gracefulness in such quotidian movement, Christa has slowed it down so that each gesture, wave of the arm, or head thrown back in laughter is distilled and imbued with poignancy.

In addition to the dancing, film images and voiceover form an abstract, fragmented narrative of Dominata, a woman walking through the city streets. The images are projected onto long white curtains that are draped along the back and sides of the stage. They hang like Doric columns, adding to the wistful quality of the piece. But soon forthright dancing and spoken word—with a decidedly New York flavor—ensues. The music, a jazz fusion, lends a steady beat throughout the dancing, which is a mix of salsa and modern dance; the fluidity and sensuality of salsa, with its hip movements and gentle, playful footwork, is interspersed with powerful lunges and leaps. All the while the dancing, whether a duet between a man and woman or a dance of all men or all women, contains an element of competition, the same friendly competition characteristic of dominoes. At one point, Christa and another performer muse about why they came to the States, what they left behind, and most important, what they miss. But they speak in fragments that are like sound bites, and this too serves as a type of music. As they talk, they begin to sway. The hips move first. Then an arm is thrown forward, followed by a shoulder and the torso rounding over. They step side to side. This movement phrase repeats and serves as a motif, signaling a pause for reflection.

But what’s also at work in Dominata is how the vernacular—the social salsa dancing and street dance of both the Caribbean and its various New York derivations—is appropriated for the stage and for performance. In general, the dance floor of a club is an arena of high drama, a space in which stories of love affairs, family tensions or bonds, and jealousy can play themselves out. The dancing is spontaneous and unchoreographed, which is often lost when the unscripted turns into performance. But in Dominata, the dancing ultimately retains a sense of immediacy.

Danzaisa is composed of fluid, sultry dancers who are versatile and technically sound. They are also warm, generous performers who seem to genuinely relish in the movement Christa has created for them. Christa, with her long, thick braided ponytails, is herself a magnetic performer. Perhaps she inherits this from her father, Marcel Stomp, who also possesses a commanding stage presence, whether performing the salsa dancing that he teaches or sitting quietly upstage playing a game of dominoes. Dominata, a poignant, intelligent piece of dance theater, uses many mediums—video, spoken word, dance, theater—to evoke a sense of longing and to tackle the complicated issues surrounding immigration—emotions well-suited for expression through the language of dance.

Just before worldwide shutdowns and travel bans went into place with COVID-19 spreading across the globe, I sat down with Brazilian directors Kleber Mendonça Filho and Juliano Dornelles on an unseasonably warm afternoon in New York City to talk about their 2019 Cannes Jury Prize-winning film Bacurau.