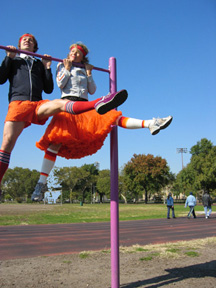 Anniversaries are in the air this October. Urban Bush Women, the Brooklyn-based company that presents dance theater based on black women’s experiences, celebrates its 20th anniversary at Danspace Project St. Mark’s (October 8–10, 8:00 pm). The Anna Sokolow Dance Theater also marks a major milestone—the 50th anniversary of groundbreaking choreographer Sokolow’s postmodern dance classic, Rooms, a dance theater work investigating loneliness and solitude in the city (Danspace Project St. Mark’s, October 28–31, 8:30 pm). Other veteran choreographers will also be presenting seasons this fall. Molissa Fenley restages her 1983 work Hemispheres at The Kitchen (October 6-9), and Jane Comfort, another Brooklyn-based choreographer, adapts the Persephone myth in a new work of dance theater at The Joyce Theater (October 5–10). But anniversaries and seasoned choreographers aside, there are other works by choreographers who are forging new forms of dance, adding their idiosyncratic, always interesting, and sometimes even hilarious choreographic voices to the dance mix. Below is a list of the different kinds of dance coming in October.

All in the Family

Sharing home movies is an act of intimacy, if not embarrassment. But Everett Dance Theatre (EDT), a multicultural dance company based in Providence, Rhode Island, has no qualms about screening clips and images from cast members’ private reels as part of Home Movies, a new work premiering at Dance Theater Workshop October 14 through 16. Home Movies grew out of a response to 9/11 and the idea that family, in times of crisis, is “comforting&#x2026;something that is indestructible and that represents the important, the secure, and the peaceful,” explains Dorothy Jungels, artistic director of EDT. Combining personal narrative, video, and dance, the work explores varying notions of family, community, and tradition while it points to the company’s diversity, presenting “different households” and thus “different sides of the city.” Home Movies ultimately attempts to show how family remains the tie that binds across culture, class, and race.

Taking mainstream film as her subject, Koosil-ja uses multimedia and dance to explore our society’s fascination with death and dying in deadmandancing EXCESS. She creates a collage of images to critique the violent in our movie-obsessed culture. In so doing she uses dance and technology as performance and as a vehicle for cultural critique. Tickets: $15

Terry Dean Bartlett (of STREB) and Katie Workum (of Workum/Garrett Dance Theater) team up as cohosts of DanceOff, a modern-dance variety show to be presented regularly at various venues around the city. This month’s kick-off performance is at P.S. 122, and the cabaret-inspired evening eschews solemnity—a sentiment normally associated with postmodern dance—for wit and humor, along with new works by site-specific choreographer Noemie LaFrance and downtown dance notables like David Neumann, Jenny Seastone Stern, Clare Byrne, Danny Clifton, and Leigh Garrett. Bartlett and Workum are hoping that DanceOff will help to open dance to wider audiences, proving that dance, far from always being heady and heavy, can also be hilarious.

The Happy Dance (or what started out ok)

A duet forms the dance basis of this new work by Brooklyn-based choreographer Monica Bill Barnes. A comic tragedy that merges postmodern dance with the kitsch and cheekiness of musical theater, The Happy Dance follows the two leads (Barnes and Tami Stronach) through a landscape of dance showgirls. Meant to explore hopelessness via rather humorous means, the piece involves a dance jig that becomes a mounting obsession.

The State of the Plague

For this issue of the Brooklyn Rail, Aminda Smith and Fabio Lanza interviewed Chuang about their first book, Social Contagion and Other Material on Microbiological Class War in China, forthcoming in October as one in a series of new titles from the historic Charles H. Kerr Publishing Company.