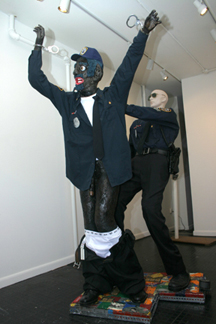 Let’s see, what’s been memorable over the last few months? Reagan died, and then television news and tabloid papers worshipped him relentlessly for a couple days. Peter Schjeldahl and lots of other art critics blew their loads over the “first good Whitney Biennial in years!” And, of course, New York turned into an all-out police state in August leading up to and during the RNC, but according to most television interviews, we the people were willing to accept this for the sake of security—and nothing catastrophic happened. Apparently it’s been a great couple of months!

Such mushy-minded, optimistic fluff is Peter Caine’s obvious target in his second show at ATM Gallery, and he tosses the dart right into the bull’s-eye with four sculptural arrangements that caustically ridicule figures of authority and supposed voices of reason. While many of the works in the glut of New York’s politically-minded group shows over the summer felt like half-baked one-liners—saved from such criticism by being on the side of “good politics”—Caine’s humor, sense of menace, and completely awful (in the John Waters sense) taste make You’re a Sensation a gleefully grim spectacle.

The utterly horrifying “Every Cop’s Fantasy” (2004) is the first obvious clue that Caine is no neo-goth fantasy-monger. A life-size mannequin (white male) wearing aviator sunglasses and a full cop get-up stands behind another mannequin (black male) with disgustingly bumpy skin, bulging eyeballs, absurdly bushy facial hair, a huge mouth, and pants and underwear around his ankles. The black man, incongruously wearing a Police Department hat and a Special Police badge, holds his cuffed hands over his head, a gesture either surrender or wild struggle. Like a rotten cherry on top, the cop is (rather gently) shoving a plunger (with “The Mud Stick” written on it) up the apprehended one’s bleeding ass.

The motors that power Caine’s figures add the perfect ingredient of ludicrousness, as their crude, rhythmic movement only makes them seem more pathetic and, paradoxically, frightening. “Ronnie Reagan” (2004) is a ridiculous miniature likeness of the late president sitting on the back of a high chair with a presidential seal on it, wearing a bib, presiding over a milk bottle with a nipple on top. Powered by a motor, he vigorously lifts weights to strengthen the biceps on his already jacked upper body. Reagan’s mostly bare skin is grotesquely garnished with clumps of human hair. Inconspicuously on the floor behind him is a small container bearing the label, “Ronnie’s Dirty Diapers.” Sure, equating the bumbling Reagan of degenerative Alzheimer’s to a baby is a crude cheap shot, but Caine’s point seems to be that he’s sick of having his intelligence insulted by The New York Post telling him what makes a great American.

“Overseer,” the installation you’re basically on top of upon entering ATM’s cramped confines, contains five figures dispersed about an area resembling a big, fake-snow encrusted diorama, the landscape of which is dotted with…are those mushrooms? Four figures are somewhere between animal and human—black-skinned dolls with bodies almost entirely covered in white hair, like primitive, oversized Mattel action figures. The rainbow lights of wholly incongruous disco balls whirl about the tundra, but the gyrating animal-humans ignore them. Keeping in mind the tenor of You’re a Sensation’s other sculptures, it’s hard not to read “Overseer” as openly mocking recent trends in contemporary art—neo-goth and thrift store-aesthetic “fun art,” specifically. Iconography appears to be stolen from assume vivid astro focus (disco balls) and David Altmejd (strange animals in a frozen, surrealist landscape), two harbingers of contemporary “youth art” at the 2004 Whitney Biennial.

Caine traffics in the deconstruction and de-legitimization of authority—the notion that what the news tells you is right, that the most now of art trends are cool, that cops are on the people’s side, really. It’s a helpless feeling to have lost faith in authority, and Caine conveys it with an I-don’t-give-a-shit middle finger. These sculptures are crude and mean—absolutely—and completely unapologetic about it, coming off as a weirdly sincere primal art authored by someone toeing the line between perceptive and psychotic. The press release, written by Caine, concludes with an abrupt paragraph: “Life is absurd.” You’re a Sensation mines the source of life’s absurdity according to Caine, ultimately emerging with a Dadaist sense of playfulness and grotesque humor as a methodology for combating unnecessary evils.