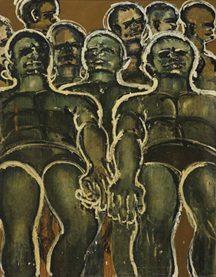 What does it say about an artist when he is universally acknowledged as being under-recognized? Viewing this show of nearly half a century of painting by Lester Johnson made apparent a couple of other paradoxical presuppositions about this artist, namely that he has advanced by going backwards and that his status as an outsider has put him on the inside track. This mini-retrospective gives viewers a chance to witness not just the developments of Johnson as a painter, but to inversely see how painting in New York evolved as well.

Moving to New York in the late forties, Johnson was a pioneer loft-dweller, residing in that neighborhood that came to be known as SoHo. While there, he shared studio space with both Larry Rivers and Philip Pearlstein. He was the only member of the Eighth Street Club with the courage or perhaps stubbornness to continue pursuing his studies of the figure. With his studio near the Bowery, Johnson found the subject for his first major breakthrough in the guise of the downtrodden men who flocked to the area for its cheap bars and dollar-a-night hotels.

The early paintings are dark and reductive, brooding with existential angst. “Bowery Patriarch” (1963) is a large, heavily painted canvas that is aware not only of the AbEx painterliness of de Kooning, Still, and Pollock, but also of the European “Material Painters” like Dubuffet. This torso, drawn with thickly troweled splattering black strokes, is centered on an almost equally dark green ground. The male subject is defined texturally as much as coloristically or tonally. The simple centralized form and heavy impasto are characteristics shared with a lot of contemporary abstract painting. In “Crowd” (1967), the hands become an integral focus. The primitive monumentality and frontal format of the “Bowery Men” and the “Men in Hats” series begins to be replaced by a more complex structure of three quarter profiles, asymmetrical groupings, and the introduction of a white line to define forms. About this time, Johnson began his twenty-five year association with Yale, where he has influenced generations of art students.

A rupture appears between the work of the sixties and that of the seventies. As if stepping out of a cellar into broad daylight, Johnson develops as a colorist. The inclusion of and shift in focus from the somber men to brightly dressed women gives him the vehicle to explore a more sensual handling of the medium. Thickly clotted and troweled surfaces with splashed and drooling paint are transformed into thin washes with rivulets and drizzles of watercolor thin pigment. Almost like a camera pulling back to expand the field of vision, Johnson relents on his close-ups of heads and torsos. The curves of limbs activate the compositions. The paintings are filled with the classical profiles of strolling ladies, their hand gestures and large awkwardly bent legs, giving them an odd foreshortened grace. Brightly patterned print dresses add a sense of decorative colorful abstraction. The eye level is lowered presenting their forms as if on a stage, or perhaps as devotional sculptures elevated in a niche. The formal dress of the men, their derby hats and suits, becomes casual, replaced by baseball caps and the self-conscious symbol of personal hipness, the logo T-shirt. During an exhibition a few years ago I asked Johnson what brought about this change. To paraphrase, he said one day in the late sixties after struggling with his latest paintings, he stepped out of his studio near the Bowery. He turned to see his wife and young daughter. At that moment the sky cleared, and they were engulfed in a pool of sunlight. Johnson realized a new direction had opened up for him.

Some critics have written that this period appears academic. But again, with Johnson’s ironic twist, this is not the Greenbergian formalism of 1970s academia, but a reach back through the great expressionists Beckmann, Marsh, and Hartley, to the neo-classicism of eighteenth-century France, and the examples of Greuze, David, and even Ingres.

The importance of drawing is apparent in the buildup of the compositions. The process of incisive reworking remains visible in the lower portions of the paintings. The solid planes of the grounds and the modeling of heads and bodies float over networks of structural lines, leaving a tribute to Johnson’s admiration for the Action Painters.

In our current state of “Post Everything” and the accompanying reevaluation of the canons of contemporary art, we might hope that like the recent shows of Philip Guston and John Currin, Lester Johnson might get the serious museum show that his work deserves.

Born in Guanajuato, Mexico, and raised in Chicago, Felipe Baeza’s practice draws on collage, printmaking, embroidery, and sculpture. Informed by queer and immigrant histories, Baeza’s largely figurative practice envisions what emancipation and fugitivity might look like for othered bodies. His figures are hybrid, often occupying an unfixed category somewhere between humanoid and plant-like. Situated against densely textured backgrounds, they seem to transcend place or time, breaking free from any domain that we can define or locate.

Katz’s individual portraits, figurative groupings, and landscapes form a highly personal and potentially arcane firmament of scenarios yet their forthright presentation in simplified motifs and bold color paradoxically make his deeply subjective journey available to all.